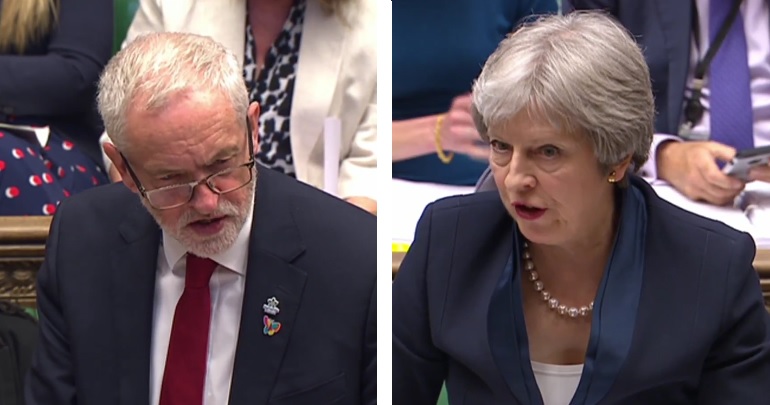 Jeremy Corbyn floored Theresa May with his first question at Prime Minister’s Questions (PMQs). The Labour leader delivered a killer question on the NHS that the prime minister couldn’t recover from.

Ahead of a Labour-led debate on privatisation in the NHS, Corbyn focused all of his questions at PMQs on the health service. And his opening question immediately backed May into a dangerous corner. He asked:

In 2010, £4bn of NHS services were outsourced to private companies. How much is it today?

May didn’t answer his straight-to-the-point question. Instead, she tried to attack Corbyn by invoking his predecessors’ record on private provision in the NHS. She said:

He asks about the outsourcing of services within the National Health Service. Of course, what we do know is that spend [sic] on the independent sector nearly doubled in the last four years of a Labour government.

Unfortunately for May, however, both the question and her answer set her off on the worst path possible.

Firstly, because attacking Corbyn with the Blair-Brown legacy is foolish. Because he’s very publicly opposed them on private provision in the NHS. So raising it just reminds people that Corbyn called it right. Secondly, of course, avoiding the question entirely made May look like she was running scared from it. And finally, it allowed Corbyn to answer the question for her, with his own special touch:

NHS budgets have increased by just 1% per year under this government but it’s jackpot time for the privateers. Their share is up by 100% to over £9bn per year.

Corbyn went on to highlight another way private providers are sucking money out of the NHS, besides providing services:

The £1.5m payment Corbyn refers to appears to be the legal settlement that Virgin Care managed to sue our underfunded health service for, after the NHS refused to hand Branson’s company one solitary contract.

Meanwhile, a GP surgery in Chelmsford that Virgin Care runs has just gone into special measures. When Branson’s company took it over in November 2016, the Care Quality Commission (CQC) rated it outstanding.

Corbyn raised this issue of the impact of shoddy standards on patient care at PMQs. He said the National Audit Office (NAO) found that NHS England’s handling of private providers had “put patients at risk of serious harm”. May countered, saying the NAO had reported identifying “no actual harm”.

Well, that’s okay then. Sod the future “risk” because this time no “actual” harm was found, eh?

In the end, May was left grasping at straws. She tried to convince people that this daylight robbery and “risk” was something to “celebrate”.

😡 @theresa_may just said we should celebrate opening up the NHS to private companies!#PMQs pic.twitter.com/GByqiHS92D

And just in case the ill-cared-for public were thinking of rejecting her ‘privateering’ ways and opting for Corbyn instead, she gave a warning. According to May, the Labour leader is planning to bring the whole goddamn system crashing down. Because Corbyn, heaven forbid, wants [paywall] to “overthrow capitalism”.

Now there’s a choice for Britain. Keep its corrupt system which only benefits the 1%, or keep its life-saving health service. I wonder which one it’ll choose.

You can watch PMQs here: