A Christian academic calls out US evangelicals for supporting Israel, live on the BBC - Canary Workers’ Co-op 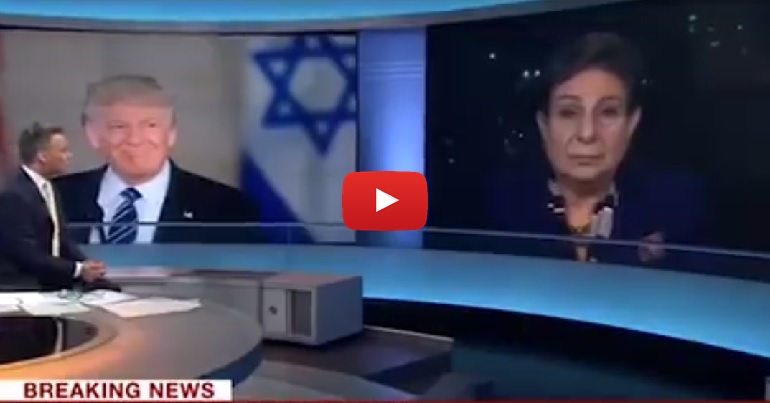 Distinguished Christian Palestinian leader and academic Hanan Ashrawi has slammed America’s religious right in an interview with the BBC.

US president Donald Trump’s decision to recognise Jerusalem as Israel’s capital city, and to move the US embassy there, sparked outrage around the world. But critics say these provocative expressions of support for Israel’s government were just as much religious as they were political.

Speaking to BBC World News, Ashrawi took aim in particular at US vice-president and evangelical Christian Mike Pence. She said:

Mike Pence has been talking about ‘god’s will’. He’s not talking politics. He’s talking biblical dogma…

Pence has previously stated that “my passion for Israel springs from my Christian faith”, arguing that “to look at Israel is to see that the God of Abraham, Isaac, and Jacob keeps his promises”. Fellow US evangelicals also believe [paywall] that the bible is enough justification for supporting the state of Israel in spite of its crimes against the Palestinian people. And as Palestinian musician and activist Reem Kelani told The Canary in reaction to Trump’s Jerusalem decision, it was clear from the start that this was “an evangelical agenda”.

But as a Christian herself, Ashrawi insisted:

I belong to the oldest Christian tradition in the world, and I don’t believe that god ordained that the world has to be unjust to Palestinians…

If he wants to come and tell me ‘it’s been ordained, this is what the bible told me’, then I think he should go preach… in a church rather than talk politics.

As the US celebrated opening its Jerusalem embassy on 14 May, Israeli forces murdered more than 60 protesters in Gaza. There was little to no reaction from members of the Trump administration to this massacre.

And just days later, a photo emerged of the US ambassador to Israel smiling alongside a photoshopped image of Jerusalem which had removed the Al-Aqsa mosque – the third holiest site in Islam – and replaced it with a Jewish temple:

What's missing in this photo of Jerusalem that US Ambassador to Israel David Friedman is looking at? The Dome of the Rock & Al-Aqsa Mosque. Removing the Islamic holy sites is a long-term goal of far-right Israeli Jewish extremists who want to erase Palestinians from Jerusalem. pic.twitter.com/Y0AnKbAm2B

The ambassador – who joined the pro-Israel victim–blaming after the Gaza massacre – claimed he was unaware of the details of the image.

But the pattern is clear. The current US administration is openly taking sides. In doing so, it is undermining hopes for peace between Israel and Palestine. And what’s worse is that it seems to be doing so – in part – for religious reasons.

The Israeli occupation of Palestine is a political problem – not a religious one. So it requires a political solution. To make it about anything else only panders to extremists, and pushes the prospects of peace further and further away.

– Find out more about the Palestinian Solidarity Campaign and the Boycott, Divestment, Sanctions (BDS) movement.