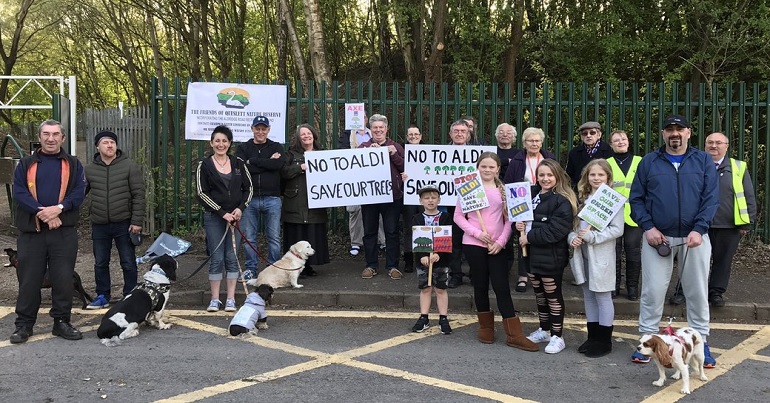 Aldi has lost an appeal over a planning application to open a new store in Birmingham. In what one campaigner called a “David and Goliath” battle, the local community won out. But the real victors in the case were both the trees that people were desperate to save from Aldi’s bulldozers, and local democracy.

As The Canary previously reported, Aldi made controversial plans for a new store on Old Horns Crescent in Great Barr, Birmingham. As BirminghamLive reported, the company originally submitted plans in 2016 for the supermarket which is on a ‘designated site of importance for nature conservation’. The area also contains trees which have protected status and is on the edge of the Queslett nature reserve.

In August 2016, Birmingham City Council planning officers heavily criticised the plans. Aldi shelved that set of plans before the council had a chance to reject them. And not to be beaten, it made a new set of plans and a second planning application to the council. The council promptly rejected that one as well. Local councillors called the site a “green lung for the city dealing with pollution” – noting that the existing trees “are much better at absorbing nitrogen dioxide”.

The government: right for a change

The government’s Planning Inspectorate made a number of points. It said that [pdf, p2]:

The site has a less managed appearance in contrast to the semi-ornamental plantings in and around neighbouring development… this serves to amplify their positive contribution to the local environment.

The inspectorate noted [pdf, p2-3] that while Aldi had said it would plant shrubs around the new building, this would not stop it being “highly visible”. This would be an “urbanisation” of the area.

Overall, the inspectorate said [pdf, p3-4] that the value of the trees:

[The area] makes an important contribution to the local environment…

[Aldi’s plans] would have a significant adverse effect on the character and appearance of the area… Thus, it would not reinforce or create a positive sense of place and local distinctiveness, with design that corresponds to site conditions and the local area context.

Aldi told The Canary it did not wish to comment at this time.

Brenda Wilson from the Friends of Queslett Nature Reserve was “delighted”. She told The Canary:

This is a great day for the local community, for wildlife and the environment. It has been a two and a half year battle with Aldi and I hope now it has come to an end and we can move on.

In that time I have been astonished at the sheer bloody mindedness and dogged persistence of Aldi in their attempt at obtaining that piece of land at whatever the cost; even if meant destroying a woodland and desecrating wildlife habitat in the process. I was so proud of the way my community, local councillors and Birmingham City Council got together and made a stand against Aldi – a bit like David and Goliath.

Little David, with nothing more than a sling and a shot, faced up to the big bully Goliath and took him out. This is just how ordinary working class people came out and protested and spoke up. They weren’t interested in two minutes of fame or being on the telly. They came out and said: ‘we want our trees, our nature reserve, our wildlife and a clean environment’.

Aldi, in their arrogance and the need for profit, were blinkered to the truth that in reality people are not easily bought. There are people out there who won`t sell their souls to greed and consumerism. This has proved that yet again there is good in humanity

Often, the government gets it wrong on matters of local planning; not least in the fracking industry. On this occasion, it appears that campaigners and local democracy have emerged victorious. And they’ve made sure the trees live to fight many another day.