More experts have piled on the government over fracking - The Canary 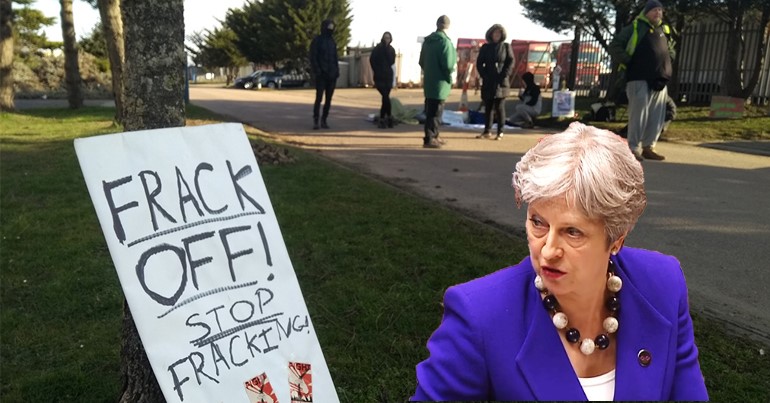 The Conservative government’s claims over the ‘need’ for fracking are looking a lot like hot air. This is because an energy industry publication and experts have just pulled them apart.

Power Technology says it is “one of the leading titles covering the global energy industry”. It recently ran an article called Does the UK really need fracked gas? Writer Heidi Vella argued the case for and against shale gas extraction, known as fracking. And it made for very interesting reading.

The government claims that:

Shale gas has the potential to provide the UK with greater energy security, economic growth and jobs, and could be an important part of our transition to a low carbon future.

We believe that it is right to utilise our domestic gas resources to the maximum extent, and to explore further the potential for onshore gas production from shale rock formations in the UK, where it is economically efficient, and where environmental impacts are robustly regulated.

But Vella’s article casts doubt on this statement.

First off, the government’s claims about “energy security”. Vella puts forward a scenario of heightened demand for gas during winter months. But she says Dr Jonathan Marshall, head of analysis at the Energy and Climate Intelligence Unit (ECIU), argues that:

spikes in demand can be managed in other ways; rather than addressing the UK’s over-reliance on gas, building a new industry around it reinforces the problem.

‘There are other ways to manage heightened demand such as by reducing it overall, by making industrial processes more efficient and insulating homes, which could compensate for the shortage,’ he explains. ‘We should be diversifying [away from gas] with more wind farms and solar panels to make it easier to trade energy.’

Vella then deals with the ‘need’ for gas.

The need for gas?

The government claims that:

We need gas in every aspect of our lives – for heating and lighting our homes, for transport, and in industry. In 2017 gas met nearly 2 thirds of total domestic energy demand. Over 85% of UK households use gas for heating and around 65% for cooking. In addition to this, around 40% of our electricity generation was sourced from natural gas.

But once again, Vella questions this. She quotes a report by New Resource Partners which says that there has been exaggeration with our future gas needs. It believes that we’ll need just 38% of our current gas capacity in the future. Translated? That means we would go from having gas meeting nearly 66% of our energy demands to just 25%.

Then Vella addresses the price of shale.

The cost of shale?

The government claims that fracking can be an:

Vella also touts Brexit as a possible thorn in the side of shale prices.

But it’s fracking’s environmental implications which are of most concern.

Aside from what Marshall highlights, studies have linked fracking to numerous other issues. Aside from its contribution to greenhouse-gas emissions, there’s the problem of polluted drinking water and also unsustainable water use. Studies have also shown links to low birth weights, premature births and a possible increased risk of breast cancer. Already in 2019, research has pointed to some risks specifically in the Bowland shale formation, where Springs Road and other sites like Preston New Road sit. It says that the formation could contain high concentrations of toxic metals such as selenium and arsenic.

The Canary asked the Department for Business, Energy and Industrial Strategy (BEIS) for comment. But it had not responded by the time of publication.

It’s fascinating that an energy publication has come out with such a balanced, but in many respects also damning, analysis of fracking. It will just add more weight to the argument that this industry should not be allowed to get a foothold in the UK.