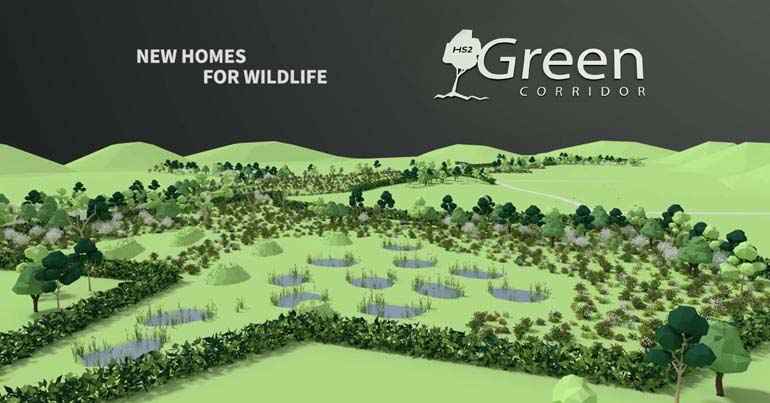 High-speed train line HS2 is facing criticism from Buckinghamshire residents for its use of controversial nets that can trap and kill birds.

On 3 April, Twitter user Trevor Morgan posted a photo of hedgerows covered by netting. Morgan said the netted hedges were located “near Quainton”:

‘Netting‘ stops birds from nesting. Interfering with or destroying birds’ nests is illegal. As a result, developers cover trees and hedges with nets before breeding season begins. This workaround makes gaining planning permission easier. But the practice has faced widespread criticism after people across the country reported nets trapping and killing birds.

The Woodland Trust called netting a “sickening practice”. It also pointed out that other wildlife – including stoats, bank voles and hedgehogs – rely on hedges. Meanwhile, the Chartered Institute of Ecology and Environmental Management (CIEEM) said it has “considerable concerns” about netting’s “overly simplistic approach”.

But, in a statement, HS2 defended the practice. It said the nets near Quainton are for gas pipeline diversion works, and that:

This temporary netting is to discourage birds from nesting during construction and was installed before the nesting season started. The netting was installed under the direction of a suitably experienced ecologist and is monitored daily.

People have criticised HS2’s impact on the environment since before it was confirmed. Environmental and wildlife groups including the Wildlife Trusts, Woodland Trust, the Ramblers, and Friends of the Earth continue to oppose it. Meanwhile, people in London have protested HS2, where linking the line to the city’s network will destroy trees in Euston Square Gardens. Activists fear HS could also pollute drinking water.

But HS2 has also faced criticism for more than just its ecological impact. It’s widely opposed for its destruction of homes and businesses to build what is essentially a vanity project for a former government.

Not only does netting harm and kill wildlife, it’s a very visual example of how money treats the non-human world as little more than something to be abused. HS2’s embracing of such a high-profile and unpopular practice reveals the project’s arrogance.