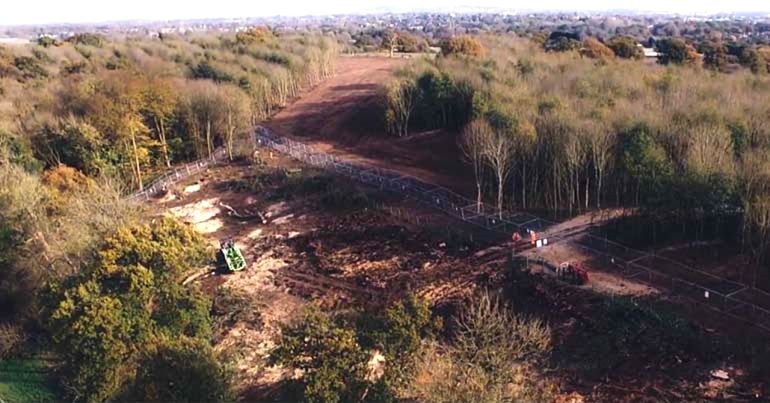 HS2’s attempt to replace woodland that the high-speed rail link destroyed has spectacularly failed. But what it suggests affects more than just British trees. The “environmental disaster” is a stark reminder that we can’t simply replace the natural world.

Two Warwickshire farmers claimed that thousands of trees have died after they were planted on their land to replace cut woodland. BBC News reported on 21 May that:

Up to 350,000 saplings have so far been planted near the £56bn train line, but two Warwickshire farmers think up to 80% on their land have died…

HS2 said the trees died because of last year’s hottest summer on record, and it planned to replant them later this year.

The BBC reported HS2 as saying that “replacing the dead trees was more “cost effective” than watering them” because of the cost of getting enough water to the affected areas. However, Joe Rukin of Stop HS2 branded the choice a “disaster”. He told BBC News:

Planting hundreds of thousands of trees up and down the line and allowing them to die because you can’t be bothered to water them is almost as big a disaster as causing havoc and destruction over a hundred ancient woodlands to build this project.

It’s not the first time HS2 has been shown up for this decision. In September 2018, the Daily Mail reported that thousands of trees in the Colne Valley had died that summer. At the time, HS2 provided the same ‘cost-effective’ reasoning.

The UN declared 22 May the International Day for Biological Diversity. It said that biodiversity is the “foundation of the ecosystems we depend on for our food, fresh water, medicines, climate regulation & more”. And it described protecting it as “critical”. The World Wildlife Fund published a video to coincide with the day. In it, presenter David Attenborough explains that “the more biodiversity, the more secure all life on Earth is”:

British conservation charity the Woodland Trust agreed. Responding to International Day for Biological Diversity, it said that all life depends on the planet’s “complex web of interactions”. However, even in the UK, “56% of our species declined between 1970 and 2013”. Another 15% are under threat of extinction or already extinct.

The Woodland Trust said this trend can be stopped. But it requires making protection of habitats such as ancient woodland an “immediate priority”. The charity defines ancient woodland as those that are present on maps dating back to 1600 in England and Wales or 1750 in Scotland. These are “irreplaceable” because each one is a unique ecosystem of plants, animals, soil and human cultural history.

In June 2018, the Woodland Trust described HS2’s tree planting programme as “greenwash nonsense”. It said that despite plans to plant seven million trees, including those that have since reportedly died, the rail link would destroy more than 40 hectares of ancient woodland. And, in a document tackling HS2 directly, the charity pointed out that:

newly planted woodland will develop some value for wildlife [but] it will never develop all of the natural characteristics of an ancient wood.

With this type of woodland reduced to just 2% of the UK’s land area, protecting that which remains is essential.

HS2’s thousands of failed saplings reveal major problems with so-called ‘mitigation’. Not only can new trees not replace ancient woodland, just getting those trees to maturity is fraught with hazards. The summer 2018 heatwave was closely linked to climate breakdown, which itself is intimately connected to biodiversity. As a result, the news of HS2’s failure and attitude is even more haunting.

While transport secretary Chris Grayling recently doubled down on the necessity of HS2, critics say the rail link will only benefit the wealthy. Meanwhile, the rest of us – the human and non-human world – will face a true natural disaster.