With hospitals in crisis, the government is shovelling even more NHS business to Amazon - Canary 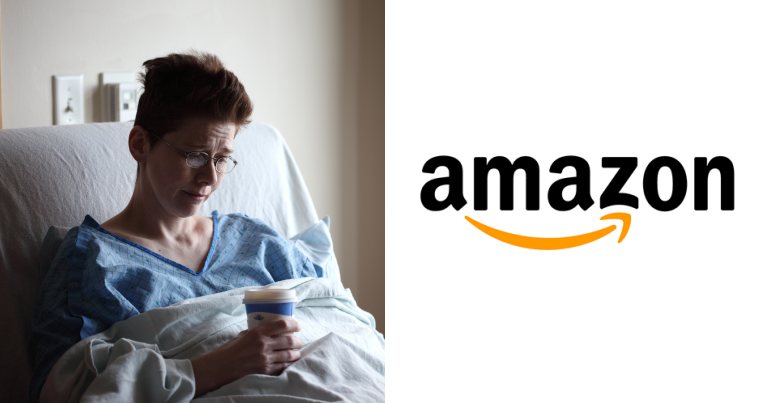 On 10 July, news emerged of a new partnership between Amazon and the NHS. People can now get “expert health advice” from Amazon’s Alexa devices. The Department of Health (DoH) claims this will reduce demand on the NHS. But given the drastic NHS funding crisis, this new partnership has caused widespread concern.

The collaboration is part of a new government initiative called NHSX. This aims to make “more NHS services available to all patients through digital technology”. Health secretary Matt Hancock called the Alexa initiative “absolutely terrific”. He claimed that it “will give back the gift of time” to healthcare professionals. Hancock also said this collaboration:

is a great example of how people can access reliable, world-leading NHS advice from the comfort of their home, reducing the pressure on our hardworking GPs and pharmacists.

According to the BBC, from now on “Amazon’s algorithm” can use “information from the NHS website to provide answers”. Previously, anyone asking the device healthcare questions would get answers from a wide range of internet sources. So there is an aspect of this partnership that’s positive. But it also raises several other pertinent questions.

Alexa, how much tax does Amazon pay?

Many people questioned why, amid ongoing NHS cuts, staff shortages and a crisis in healthcare, the UK government has outsourced this service to a US company. In 2018, Amazon recorded multi-billion dollar revenue and profits, yet it has managed to avoid paying full taxes both in the UK and the US. Amazon’s CEO Jeff Bezos is the richest person on the planet, worth an estimated $121bn.

As one doctor pointed out, adding to Bezos’ wealth diverts funds from crucial frontline services:

Every penny handed over to Jeff Bezos is money *not* spent on frontline care.

When we have 4.4 million patients on waiting lists, and 100k too few NHS staff. @MattHancock’s priorities here will cost patients dearly. https://t.co/ErxaAQD8mC

Others, meanwhile, showed concern about the NHS creeping further towards privatisation:

A gimmick designed to paper over the cracks of a financially-starved NHS, and a backdoor to privatisation. Since when does paying an Amazon subscription obtain access to NHS advice?
More importantly, what deal has been reached with tax-dodging Amazon to facilitate this?

Alexa, what do you do with my data?

There are also further concerns about Amazon’s ability to gather data and over privacy issues. Silkie Carlo, director of Big Brother Watch, said:

Encouraging the public to give their private health details to one of the most aggressive corporate data guzzlers is astonishingly misguided.

Amazon’s Alexa records what people say, stores recordings in data centres we know nothing about, and exploits our data for profit.

According to Carlo, this partnership could “result in people being profiled and targeted by data brokers based on their deeply personal health concerns”. She continued:

Healthcare is made inaccessible when trust and privacy is stripped away, and that’s what this terrible plan would do. It’s a data protection disaster waiting to happen.

The Times reported that Amazon said it won’t “share information with third parties”. It also claimed that all “data was encrypted and kept confidential”. According to an Amazon spokesperson, customers remain “in control of their voice history” and can delete it. However, many people are not aware of this Alexa function.

As TechRadar noted, there are growing concerns because, if people don’t delete them, Amazon keeps “those recordings…indefinitely”. And there is mounting evidence to suggest Amazon does share this data “with third-parties”.

Many people shared these concerns, including Labour’s Tom Watson:

The giant data monopolies want one thing: more and more data to drive their huge profits. Entrusting Amazon's Alexa to dispense health advice to patients simply opens the door to the holy grail – our NHS data. This is the beginning of a Mission Creep.https://t.co/UXN05bHMZU

The problem is, by doing this the NHS is allowing Amazon to effectively have our medical data. When we ask Alexa "should my stomach ache last two days" we tell Amazon we need digestion products. They claim they won't sell on that info, but they have form on misusing our data

If they are using it for comercial purposes, which, if they are touting it as a service for alexa users they are, they can pay for the bandwidth and abide by T&C written to protect the NHS data. This data is worth a fortune, which is why the torys are trying to sell it cheap

Alexa, how can we fire Matt Hancock?

In a further twist of irony, despite Hancock championing this partnership in 2018, he claimed he doesn’t own an Alexa, and never would. According to the Times, he said:

There is an essential humanity that we have got to preserve.

So where is this “humanity” now? Since 2010, the NHS has faced the biggest spending cuts in its 70-year history. On 9 July, Cornwall’s only hospital declared a “critical incident”. An “influx of patients” caused “immense pressure”. Staff had to treat patients in corridors, while “up to 15 ambulances” were stuck outside. As shadow health secretary Jon Ashworth said:

This is a worrying sign that hospitals are struggling to cope under extreme and sustained pressure.

"Alexa… my heart"
"Playing achy breaky heart"
"No… I'm having a heart attack"
"Art attack is a 90s children's TV show…"
"Alexa my arm is sore"
"New alarm set for four"
"Alexa for the love of fuck call me an ambulance"
"Thank you, I will now refer to you as an ambulance"

What’s needed is a properly funded NHS. And the only way to get that is a general election and a change of government.