Despite the 'climate emergency', fracking is about to restart in Lancashire - The Canary 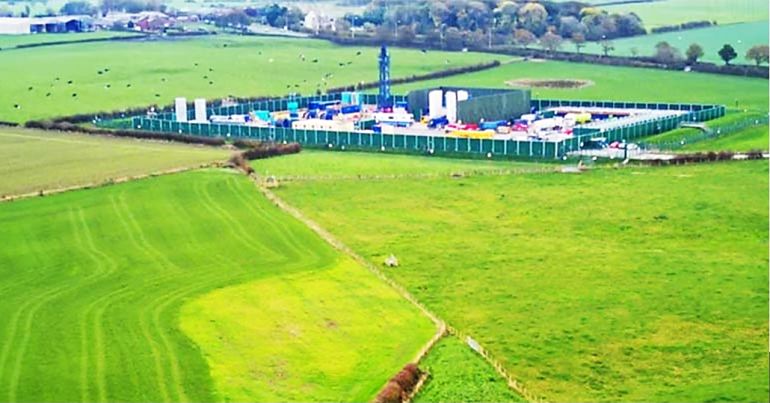 Fracking company Cuadrilla has returned to its site at Preston New Road (PNR) with plans to restart drilling for gas. Meanwhile, a second fracking company has submitted proposals for another site in Lancashire. And companies are still pushing for these new fossil fuels despite the government’s declaration of a “climate emergency”.

On 11 July, Cuadrilla announced it would start sending fracking equipment back to PNR. The company plans to restart operations by the end of August. And Cuadrilla told news website DrillorDrop that it would focus on a second well, named PNR-2. The first well, PNR-1, was shut down in December 2018 after two months of drilling that caused 56 earth tremors.

Cuadrilla issued a statement saying the work “is the latest step in demonstrating the huge commercial opportunity of natural gas from UK shale”. Its boss Francis Egan said that fracking would be “essential if the UK is to hit net zero CO2 emissions by 2050”. However, anti-fracking protesters disagreed. A spokesperson for the anti-fracking Preston New Road Action Group told DrillorDrop:

It is highly concerning for residents close to [PNR] that we are again going to go through a period of disruption and worry. Cuadrilla failed to fully frack their first well so it seems strange that they feel that they will get better results from the second.

It seems extraordinary that with the government just announcing a climate emergency, we are contemplating a resumption of fracking on the Fylde… We will continue to strongly oppose fossil fuels and demand an immediate transition to renewable energy.

Lancashire County Council published plans for a second fracking site on 17 July. Aurora Energy Resources wants to frack near the village of Great Altcar, about 10 miles north of Liverpool. The company’s managing director Ian Roche said to local paper Blackpool Gazette that the new site would “bring benefits” to the local and national economy.

On the other hand, DrillorDrop reported that the site is home to a number of threatened bird species and would involve around a year and a half of non-stop operations. And it pointed out that Aurora Energy Resource’s own assessment lists increased greenhouse gas emissions as a “disbenefit”.

This renewed push for fracking has come despite widespread recognition of a climate emergency. On 1 May, the UK formally recognised the urgent situation that the climate is in. And on 28 June, Blackpool Council set out its opposition to fracking as part of a declaration on the climate crisis. Council leader Simon Blackburn said the cross-party agreement meant fracking companies wouldn’t be allowed to use its land.

And the science is clear that, despite Egan’s claims, fracking won’t help fight climate breakdown. As the Guardian reported in 2016, shale gas is only slightly less polluting than coal if “leakage is no more than 2-3%”. However, it’s almost impossible to measure leakage properly. And, as The Canary has previously reported, catastrophe can only be avoided if radical change happens now. Fracking has no role to play as a ‘bridging’ fuel.

Labour has promised to end the industry if it reaches power. And this may be the best bet in the short-term. We can’t hand millions of pounds over to fossil fuel companies for a few decades of heavily polluting gas energy. In the long-term future, we must continue relying on ourselves and each other to hold climate-destroying companies to account.