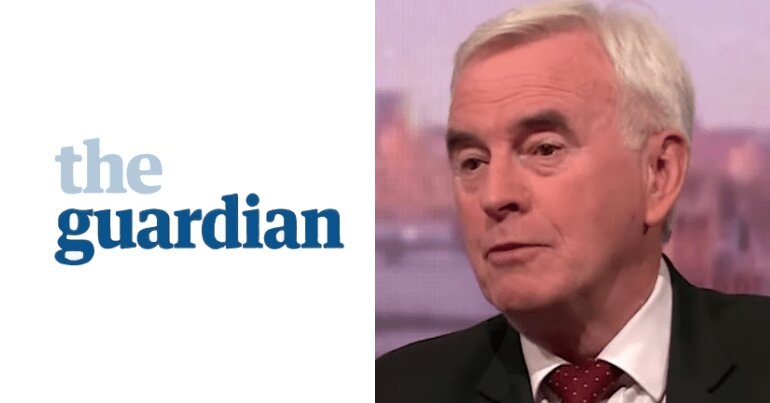 Has it really come to this, that the ⁦⁦@guardian⁩ is banning the brilliant cartoonist, Steve Bell’s cartoons? pic.twitter.com/9aSvgE5ljb

The Guardian refused to publish the latest work from its resident cartoonist Steve Bell: 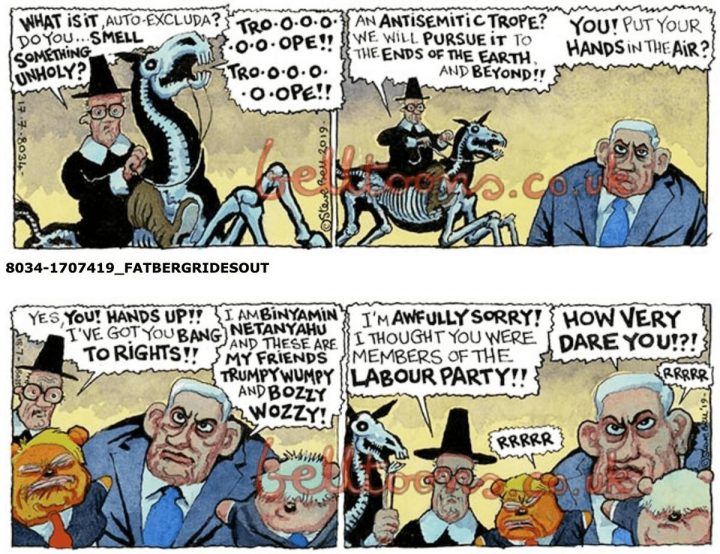 The cartoon seems to be poking fun at a long running contradiction in the mindset of the pro-Israel establishment. It’s an antisemitic trope to suggest a Jewish person must support Israel simply because they are Jewish. Yet, ironically, it’s Israeli prime minister Benjamin Netanyahu who frequently peddles the idea that his government speaks for all Jewish people:

On this day, on behalf of the Jewish people, I say to those who have sought and still seek to destroy us: You have failed and you will fail.

In other words, the US president was referring to Netanyahu as the prime minister of the Jewish people in the room, even though they were North American.

Nonetheless, it is the Labour membership that is hounded as antisemitic. That’s despite disciplinary cases relating to antisemitism among Labour members since September 2015 amounting to 0.06% of party’s membership.

With that in mind, Bell’s cartoon makes a striking point.

“Some subjects that we just can’t touch?”

Bell appears to have sent an email to the Guardian over the cartoon. In it, he questioned the outlet’s logic for rejecting his work:

You said ‘the lawyers were concerned’, but what about? It’s not antisemitic, nor is it libelous…

Does the Guardian no longer tolerate content that contravenes its editorial line?

Bell then called out an apparent double standard. On the same day, the Guardian hosted an attack ad against Jeremy Corbyn over antisemitism from 64 Labour lords. Bell said:

Why in today’s paper has the Guardian published a highly partisan and personally insulting… advert on page 20 that uses the Labour Party logo, but is clearly not a Labour Party approved advert? I would have thought that there would be far more reason to expect a legal challenge on that than on my… cartoon. Or is it that you don’t want to offend poor Tom but are quite happy to offend poor Jeremy?

And, for Bell, the double standard goes further:

Why on earth did the Guardian publish, then unpublish, a letter in support of Chris Williamson signed by 100 persons identifying themselves as Jewish, including Noam Chomsky? Were they the wrong kind of Jews.

are there some subjects that we just can’t touch?

A Guardian news and media spokesperson told The Canary:

We stand by our decision not to publish the cartoons.

And the outlet said that it removed the letter in support of Chris Williamson because of “errors in the list of signatories provided”.

On social media, many people were unimpressed with the Guardian:

The Guardian and Steve Bell are heading for the rocks, it seems. Paradoxically it's over the Guardian banning his new cartoon strip. It shows Tom Watson as the 'antisemite-finder general'. Too close to the bone for the Guardian, which has been cheerleading the same witch-hunt pic.twitter.com/Q0yluHNbmF

So, @guardian censors a Steve Bell cartoon strip depicting Tom Watson and Benjamin Netanyahu, but provides Margaret Hodge with a platform to once again abuse Jeremy Corbyn as 'a racist and an antisemite'.
Please explain this, @KathViner#DumpTheGuardian https://t.co/cFYhG1Hhe7 pic.twitter.com/IVigGu3xWv

At least someone working for the Guardian has integrity. Whether Steve Bell will still have a job after this brutally honest email is another matter. Well done, @BellBelltoons. https://t.co/twfxnT7ce9

When allegations of antisemitism damage Corbyn, the Guardian is all over it. But as soon as anyone questions the smear campaign, of which the Guardian has played a key role, the outlet immediately goes on the defensive.

Its latest censorship of Bell only confirms that the Guardian is no friend of the Labour movement. No wonder McDonnell is aghast.