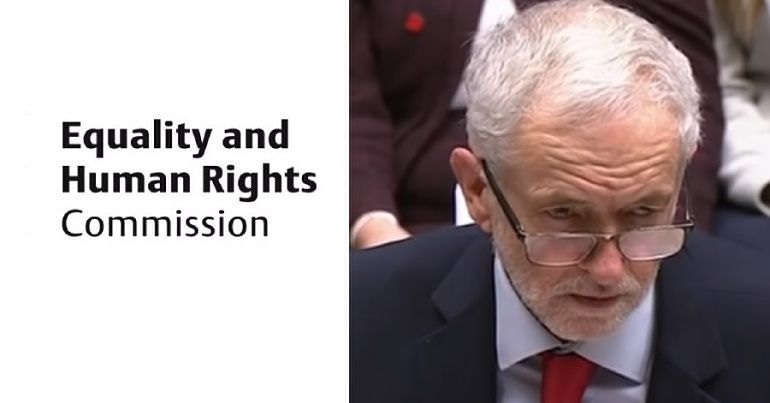 Fresh revelations have brought the elite commissioners probing Labour antisemitism into question. An investigation from the Morning Star has raised fears of potential conflicts of interests right at the top of the Equality and Human Rights Commission (EHRC).

A follow up by The Canary has found further reasons to be concerned about the impartiality of “the highest level decision-making body” at the EHRC. The Conservative minister for women and equalities appoints the body’s commissioners and the latest round happened under Penny Mordaunt in May 2018.

As the Morning Star reported, executive director of Corruption Watch Andrew Feinstein was concerned about the lack of “context” in the probe:

Only a very small percentage of Labour members hold anti-semitic views and a YouGov poll in 2015 found Labour displayed the second least amount of any political party, second only to the Liberal Democrats.

In 2017, two years into Jeremy Corbyn’s leadership, the extent of anti-semitism in Labour had actually dropped, according to polling.

Feinstein’s mother was a Holocaust survivor who lost 39 family members in Nazi concentration camps. He points out that YouGov polling showed the percentage of Labour supporters agreeing with antisemitic statements actually fell by 8% from 2015-17.

Fears over conflicts of interest at the EHRC go right to the top. Chairman David Isaac is an equity partner at law company Pinsent Masons. The Conservative government pays the firm large amounts of money for governmental contracts. The City company received 10 government contracts in 2015, for example, worth around £5m.

Isaac no longer receives this money because he agreed:

not to advise government clients of Pinsent Masons while he holds the role of chair of EHRC, and not to receive profit as an equity partner from work conducted by that firm on behalf of the government.

Nonetheless, Isaac stepped aside during an EHRC investigation into BBC equal pay earlier this year. The minutes of the meeting where he recused himself read:

He remains chairman for the probe into Labour and antisemitism.

It’s worth noting that it was Harriet Harman who first raised concerns in 2016 about Isaac’s role at the law firm, saying that there was “evidently a potential conflict of interest” in Isaac being the chair.

An EHRC spokesperson told The Canary:

In a now deleted article, the Jewish Chronicle, which has routinely attacked Corbyn over allegations of antisemitism, praised the Conservatives’ appointment of both Isaac and CEO of EHRC Rebecca Hilsenrath:

There is a strong Jewish presence at the top of Britain’s equality watchdog. David Isaac, new chairman of the Equality and Human Rights Commission, took up office this week, joining Rebecca Hilsenrath, who was made chief executive of the body last autumn.

But while the Jewish Chronicle praises the “Jewish presence” at the top of the EHRC, it has frequently attacked Jewish Voice for Labour (JVL), an organisation made up of Jewish Labour members. The group actively opposes Israel’s occupation of Palestine and advocates boycotting its apartheid regime.

There was certainly a potential conflict of interest for Hilsenrath. The CEO has already stepped aside from the watchdog’s probe into Labour because, in her words, she’s “an active member of the Anglo-Jewish community”.

Back in September 2017, Hilsenrath made her views about Labour and antisemitism clear:

the Labour party needs to do more to establish that it is not a racist party.

A zero tolerance approach to anti-Semitism should mean just that. When senior party figures are saying there’s a problem, then the leadership should take swift action. It is simply not acceptable to say they oppose these views…

more needs to be done to root out anti-Semitic views that clearly exist in the party.

Before Hilsenrath stepped aside

In reference to Hilsenrath standing aside, minutes of an EHRC board meeting read:

Although the board was content that this did not represent a substantive conflict of interest, there was concern that there could be a perception of bias and therefore Rebecca Hilsenrath agreed to recuse herself from determination in relation to this matter.

Still, the Morning Star points out:

By the time Ms Hilsenrath stepped down, the EHRC had been in receipt of the Campaign Against Antisemitism’s request to open a statutory investigation into Labour for over two months.

The EHRC had already made some “progress” on the matter and when Ms Hilsenrath stepped aside, the board agreed it was the chairman, Mr Isaac, who should “provide direction” to the commission on the next steps regarding “an investigation into anti-semitism in the Labour Party.”

Speaking to The Canary, an EHRC spokesperson said:

Our Chief Executive has not been involved in any of the decision making regarding the opening of this investigation.

There are, however, further EHRC commissioners who have connections to institutions that may not be totally enthused by the prospect of a Labour government under the current leadership.

Board member Mark McLane, for example, was head of global diversity and inclusion for Barclays PLC until end of 2018. And McLane’s EHRC conflicts of interest disclosures show he is still a shareholder. He is also currently Head of Diversity and Inclusion at M&G Prudential, another investment fund with billions in assets.

Barclays operates an investment fund of £1.2 trillion in assets that has a lot to lose from a Corbyn-led government. Labour’s 2017 manifesto reads:

Labour will overhaul the regulation of our financial system, putting in place a firm ring-fence between investment and retail banking that will protect consumers.

This legislation, known as Glass-Steagall, prevents the financial sector gambling with the livelihood of customers and its repeal is considered a major cause of the 2008 crash. Labour’s plan to reintroduce the regulation would fundamentally restrict City of London activity.

Another board member, Helen Mahy, works for a company that could also lose out significantly from a Corbyn-led government. Mahy is a non-executive director of SSE plc. SSE is the second largest energy and gas supplier in the UK.

Corbyn’s Labour wants to roll out “publicly owned, locally accountable energy companies and co-operatives to rival existing private energy suppliers, with at least one [in] every region”.

Mahy is also a senior independent director of Primary Health Properties plc, which rents healthcare facilities. This potentially conflicts with Corbyn’s agenda for the public provision of NHS services.

In an email to The Canary, an EHRC spokesperson continued:

We are an independent regulator and take our impartiality very seriously. We have robust procedures and policies in place to manage conflicts of interests or perceived conflicts of interests. All decisions about enforcement action are based strictly on thorough examination of the evidence and information provided to us. Anyone with a conflict of interest will not be working on our investigation into the Labour Party.

The EHRC board looks like a who’s-who of elites embedded in the establishment. Many of the commissioners have other jobs in huge companies. And a Corbyn-led government represents a fundamental threat to the status quo.

Given the data shows that antisemitism in Labour has actually fallen since Corbyn became leader, the very fact a probe is going ahead has raised concerns. And any potential conflicts of interest will only add to those worries.