Theresa May didn’t give a monkey's about Mandela. She’s upholding Israeli apartheid right now. - The Canary 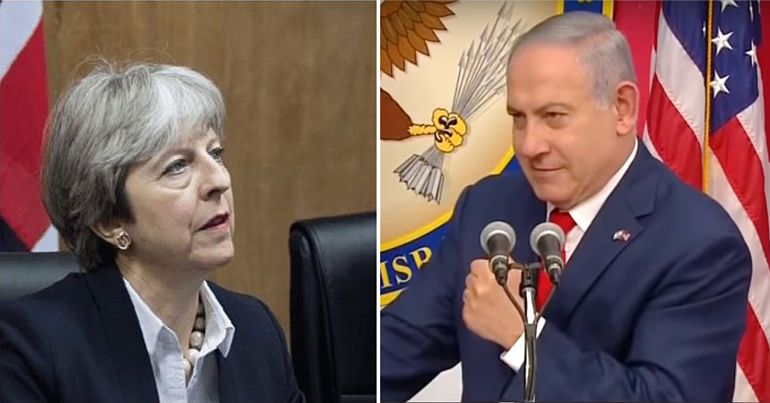 Theresa May didn’t give a monkey’s about Nelson Mandela. The prime minister is supporting Israeli apartheid in 2018. During an interview with Channel 4’s Michael Crick, May was unable to offer anything she did to oppose apartheid in South Africa:

I think you know full well that I didn’t go on protests, Michael.

May instead tried to point to “the work the United Kingdom government did”. But Margaret Thatcher actually considered Mandela’s African National Congress “a typical terrorist organisation”. Her 1980s Conservative Party vehemently opposed sanctions against the apartheid regime.

Just as Thatcher always claimed to oppose apartheid in South Africa on principal, May says she backs “lasting peace that is in the interests of both Israelis and Palestinians”. But May’s actions support the Israeli apartheid regime politically, economically and militarily:

Following in Thatcher’s footsteps on South Africa, May is also strongly against boycotting Israel:

there can never be any excuses for boycotts, divestment or sanctions: they are unacceptable and this government will have no truck with those who subscribe to them.

That’s despite the success of the boycott movement. For example, British security giant G4S cut ties with Israeli prisons after pressure from the campaign (although it still has many other contracts supporting the apartheid). Before then, G4S was facilitating:

the systematic torture and ill-treatment of Palestinian prisoners, including child prisoners, held in solitary confinement.

Why Israel is an apartheid system now

Apartheid is a crime against humanity under international law. It’s defined as:

an institutionalized regime of systematic oppression and domination by one racial group over any other racial group or groups and committed with the intention of maintaining that regime.

The apartheid definition accurately describes not just the occupied territories, but Israel itself. Israeli citizen and renowned journalist Jonathan Cook flushes this out in an extensive investigation. Here are some key points:

Cook argues examples like these mean Israel echoes “the key features of South African apartheid”. A report from the United Nations Economic Social Commission for Western Asia (ESCWA) concluded that Israel has:

Although the UN report was retracted under immense pressure from Israel and the US, that doesn’t detract from the importance of its claims. And all that comes before you get to the treatment of Palestinians in the occupied territories, like Gaza and the West Bank.

Wrong side of history

Through providing political, economic and military support, May’s government is supporting the Israeli apartheid system. Meanwhile, Jeremy Corbyn has always opposed the systematic decimation of the Palestinian people. The Labour leader was also famously arrested for protesting against apartheid in South Africa.

It was once denounced as “cloud cuckoo land” that Mandela could end systematic apartheid in South Africa and enter government. The same will be said for Israel: It always seems impossible until it’s done. But when that happens, May and the Conservatives will be on the wrong side of history yet again. And those opposing the occupation will be proved right.