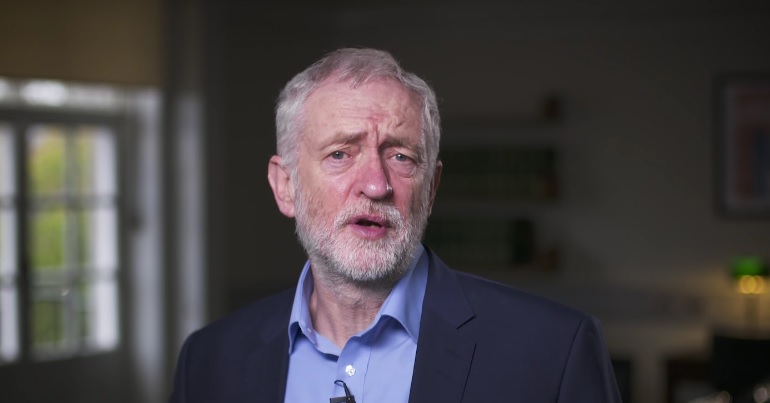 “Labour is a threat to a damaging and failed system”

The Labour leader posted a video calling out a “rigged” economic system and bankers’ bonuses:

The people who caused it now call me a threat. They’re right.

Labour is a threat to a damaging and failed system rigged for the few. pic.twitter.com/ez2Ms8yKE2

But Pollard suggested that Corbyn was actually talking about an elite Jewish conspiracy in the video:

Been hesitating to tweet this bevause I keep thinking it can't be, surely it can't be.
But the more I think about It, the more it seems it really is.
This is 'nudge, nudge, you know who I'm talking about don't you?'
And yes I do. It's appalling https://t.co/XzgpnLwlTU

I accept all the criticism of this tweet, and that I may be way off beam.
But this is what happens when antisemitism is allowed to flourish – and when an antisemite leads a party. You start to read his every word through that prism. Even if the words aren’t about Jews. https://t.co/90mfrwkkYE

Pollard’s Jewish Chronicle has relentlessly published articles accusing Labour of antisemitism. But the smears against Corbyn heavily rely on misrepresentation.

For example, the Jewish Chronicle suggested Corbyn hosted an antisemitic event in parliament in 2010, because speakers compared the actions of Israel to the Nazis. But at the meeting, a Jewish Holocaust survivor was addressing a room of predominantly Jewish people.

It’s also worth noting that Pollard’s recent backtracking is not the only incident that has cast doubt on his credibility. In August 2018, the Independent Press Standards Organisation (IPSO) ruled that the Jewish Chronicle made a false allegation of antisemitism against prominent blogger Mike Sivier.

“Clearly unfit” to be editor

Im struggling to decode this one. Corbyn was clearly talking about casino banking and other unsavoury banking practices. Pollard seems to be indulging in antisemitic tropes of global banks=jews and then blaming Corbyn for making him say it? We're at peak crank here https://t.co/RcGyeW9K4q

If @jeremycorbyn conflated the bankers who caused the 2008 crash with Jews he would rightly be called an antisemite. Yet that's precisely what Stephen Pollard has done. Surely his job as editor of @JewishChron is now untenable. He's clearly unfit for such an influential position.

Pollard is obviously a disingenuous anti-left reactionary who I've got no time for and there's nothing antisemitic in the Corbyn video he links to. But I'd be more cautious than some leftists just dismissing this. pic.twitter.com/iNyBXId5AO

Mr Pollard is stretching so very far, either because he has a visceral hatred for Corbyn and Labour, or he himself has an antisemitism problem so when he hears bankers he instinctively thinks Jews.

We are in very dangerous territory. The editor of a mainstream newspaper has publicly equated criticising inequality with antisemitism. It’s imperative that we call that out.