It's no-deal Brexit or my terrible plan, claims woman who should call an election - Canary 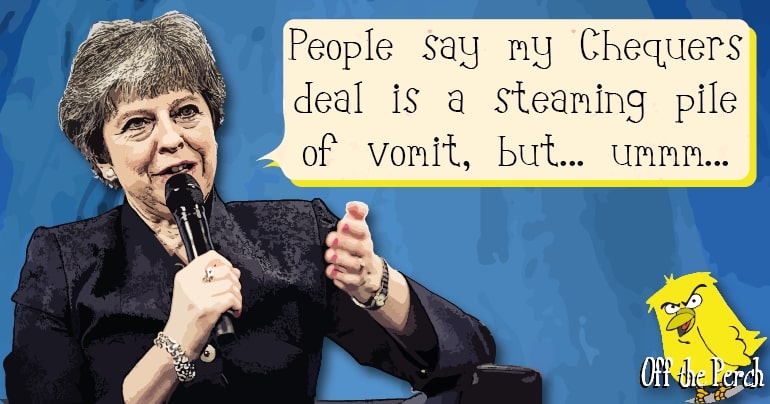 After two years of dealing with Brexit, Theresa May finally cobbled together a Brexit plan. It may not be good; it may not be deliverable, and it may have divided her party, but it is – in the broadest sense of the word – a ‘plan’.

The alternative to the Chequers proposal is a ‘no-deal Brexit’. This is like trying to buy some jeans, failing to haggle a good price, and then storming out without the trousers you were wearing when you walked in.

Oh – but actually – that isn’t the only alternative. The other option is to CALL A GENERAL ELECTION NOW, YOU COWARDS!

There are a few reasons why the Tories don’t want to call an election:

Coincidentally, these are also the reasons why everyone else should want an election.

Of course, it’s prudent to ask if Labour will do any better at Brexit. The obvious answer is ‘yes’ – they couldn’t do any worse – because the party’s leadership isn’t driven by an ideological bloodlust to crush the marginalised.

That isn’t to say a Labour Brexit will be good, mind. It isn’t even to say it will be acceptable, or not somewhat horrendous.