Someone asked Vince Cable if the LibDems were ‘too nice’. Well stop laughing and let's look at their record. - The Canary 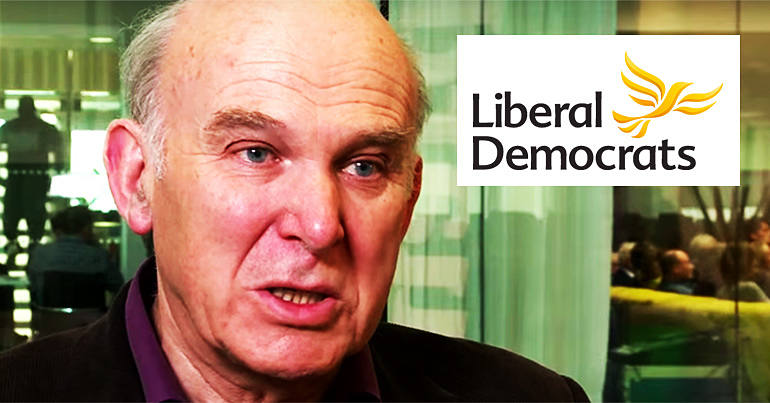 Leader of the Liberal Democrats Vince Cable was fielding questions at the party’s annual conference on Sunday 16 September when an audience member asked him:

Are we being too nice?

I’d say it probably is a temperamental failure that we have as a party.

But take one look at the Lib Dems’ record, both in and out of government, and Cable’s answer seems a bit disingenuous. And so does the question.

Vince Cable supported raising tuition fees, privatised Royal Mail on the cheap and voted for the bedroom tax. You can't trust the LibDems.

Well, they’re not very nice policies. But surely he’s better on other topics:

"LibDems can heal Britain's economic divide" says @vincecable who, in government, voted for the rich to be richer (no tax hike for >£150k, no bankers bonus tax, no mansion tax) & for the poor to be poorer (benefit cuts, VAT hike, bedroom tax). https://t.co/tE46HMeOZ1

Alright, but if you look at his overall voting record, he must come across as a good guy:

OK, it’s not looking great. But surely his desire to stop the worst effects of a hard Brexit makes him a sweetie:

. @vincecable didn't vote against a hard Brexit because he was at a shady meeting to start a new centrist party@LibDems disasterclass pic.twitter.com/tni6D3nn7Q

Not all nasty, right?

Alright, so let’s forget about Cable for a second. Surely some Lib Dems really are ‘too nice’.

Tim Farron again refuses to say whether homosexuality is a sin https://t.co/LuSjiFyh6y

Well, inferring that gay sex is a sin isn’t nice at all. But personal morals aside, surely he really cared about stopping a hard Brexit:

Given the Lib Dems' sole excuse for existing right now is to be the 'Stop Brexit party', this is off the charts. https://t.co/9MDeUNQ9Ll

So where was he?

Oh wow did @timfarron actually miss the Brexit vote because he was talking about gay sex again https://t.co/PvCVp7dpHe

But come on, he’s a Lib Dem. He must have seen the error of his ways:

Tim Farron: I was a fool to say gay sex is not a sin https://t.co/u52DcXsCGU

Well, luckily he knows how to apologise for his faults:

OK, OK. So some of the Lib Dem leaders have said and done some bad things.

But the former party leader and deputy prime minister Nick Clegg was alright, wasn’t he?

I mean, he got a knighthood:

Nick Clegg’s record in government was shameful. His most infamous betrayal came after he pledged not to increase tuition fees in England.
Clegg sold out over voting reform. He caved in over abolition of the Lords and stood by while David Cameron stuffed more cronies in there ?

But he managed to put the breaks on Tory austerity, didn’t he? Oh:

Nick Clegg aided and abetted austerity. One of the most painful and damaging policies of a lifetime. He was in a position to stop it and chose not to. So yep. Makes sense he's getting a knighthood.

Well, he didn’t have a choice, right? He was in government and had to work with what he had.

.@Nick_Clegg, austerity is a political choice you made which has affected people's lives across our country. https://t.co/C4jT8v8QhU

But come on, it’s not like anyone in the Lib Dems is listening to him anymore:

Close battle between Gina Miller and Nick Clegg for most popular person at #LDConf. Nick’s fringe room has been upgraded to this cavernous arena, and it’s still standing room only. pic.twitter.com/6dC2hegJaA

Cruel to be kind

There’s no way around it. Objectively, it’s a stretch for the Liberal Democrats to say they’re nice.

They’ve broken promises on tuition fees and backed crippling austerity. They’ve run a homophobic election campaign. And now they’re reportedly trying to sabotage one of the only hopes of removing a Tory government.

So to be brutally honest, the only “temperamental failure” the Lib Dems really have is that they’re yellow Tories.

And as failures go, that’s a pretty bad one.