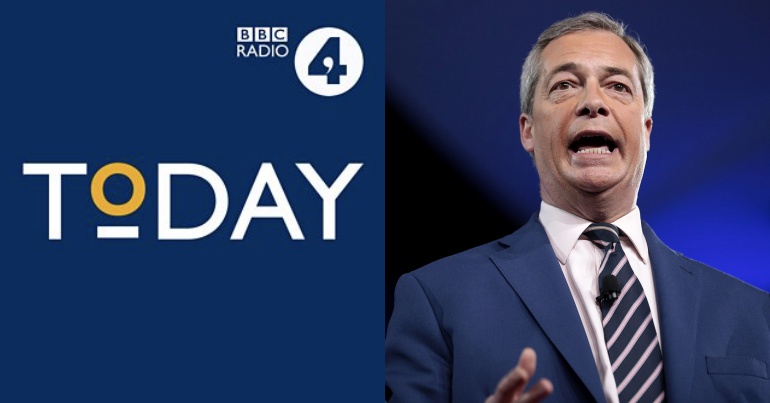 “Hang its head in absolute shame”

On 18 September, the Migration Advisory Committee (MAC) released its final report into immigration in the European Economic Area (EEA). This has a significant impact on Brexit negotiations. So the BBC invited Farage and SNP MP Ian Blackford onto the show to discuss immigration.

During the segment, Farage blamed immigrants for pretty much everything. He also defended Leave.EU’s now infamous ‘Breaking Point’ posters. These were reported to the police as a “blatant attempt to incite racial hatred”.

Listeners took to social media to share their outrage:

Nigel Farage was on #r4today and defended his “breaking point" poster which used a picture derived from Nazi propaganda.

What’s worse is that he was allowed to get away with it. The BBC should hang its head in absolute shame.

@BBCr4today In relation to Farage's infamous Breaking Point poster, he notes that most of those pictured are young men so economic migrants not refugees, He then goes on to claim that these young fit men are taking up all our GP appointments. You couldn't make it up, but NF can.

And they have a very serious point. Because the BBC should not have allowed Farage to present his racist views without challenge.

Blackford raised a very serious point when he referenced the post-referendum “increase in hate crime” and the environment “created by the likes of UKIP and others on the Tory right wing”. This led on to a discussion about the ‘Breaking Point’ posters that caused “a more inflammatory debate” during the referendum. Without interruption, Farage said:

These were not refugees… These were people taking advantage of weak European rules.

But he didn’t stop there. Because he also claimed that immigration has changed people’s lives:

in terms of their jobs, their wages, their ability to get houses, to get GP appointments. It has reduced the quality of life of people in this country.

During this tirade, his dog whistle racism went unchallenged.

As Labour MP David Lammy pointed out, Farage was factually way off the mark in his ‘analysis’:

Nigel Farage on #r4today once again spouting his usual crap about immigration causing problems in the NHS & housing.

12.5% of NHS staff are non-British. 28% of building workers in London are from other EU countries. Stop exploiting foreign nationals to excuse government failure.

Farage pedalling #Brexit misinformation again on @BBCr4today. The evidence is that the impact of #EU #immigration on “native” British wages is “infinitesimally small’ – here’s an speech I made about this from Hansard https://t.co/iibm0l3ULS https://t.co/ERV7wYbyhW

And the MAC report actually totally debunked Farage’s take on immigration too:

Today's Migration Advisory Committee report says migration has basically no impact on the employment rate or wages. In other words, everything Nigel Farage has said for the last 30 years about immigration is total nonsense. No doubt he'll dismiss the findings as merely experts…

In short, by letting Farage speak unchallenged, the BBC broadcast inaccurate and dangerous rhetoric about immigration and thousands of EU nationals currently living in the UK.

So many people questioned why the BBC gave him airtime – yet again. Because Farage’s only elected position is as an MEP.

#r4today – I switch on the radio to hear Nigel Farage. Again. How about inviting on a range of MEPs, people who actually take part in the work of the parliament and their communities? Like @MollyMEP @julie4nw @catherinemep @BBCRadio4 @BBC

Others were far less polite about Farage’s car wreck of a political career:

The choice is essentially this:

– Listen to the IMF, a 72 year old global organisation whose primary purpose is to safeguard a sustainable economy across the world.

– Listen to Nigel Farage, a 54 year old pork scratching who once lost an election to a man dressed as a dolphin. https://t.co/8TO7hTpZbL

More airtime for Nigel Farage — seven-times failed Parliamentary candidate, not a leader of any party — on @BBCr4today. When will BBC News cease shoring up this outlier’s brand for him?

But this segment also poses bigger questions about why the BBC continually gives Farage a platform to air his noxious views:

If @BBCr4today continues to insist that @Nigel_Farage has a semi-permanent seat on the programme can they at least ensure the interviewer has the ability to stop him delivering a monologue?

Farage headed up a vicious campaign during the EU referendum. Serious questions have emerged about the lies shared, and the inflammatory ‘Breaking Point’ posters which resembled “Nazi propaganda”. Hate crime spiked, and police chiefs are warning of a further rise when the UK actually leaves the EU.

And yet the BBC still let Farage on as a spokesperson about immigration. No wonder people are furious.