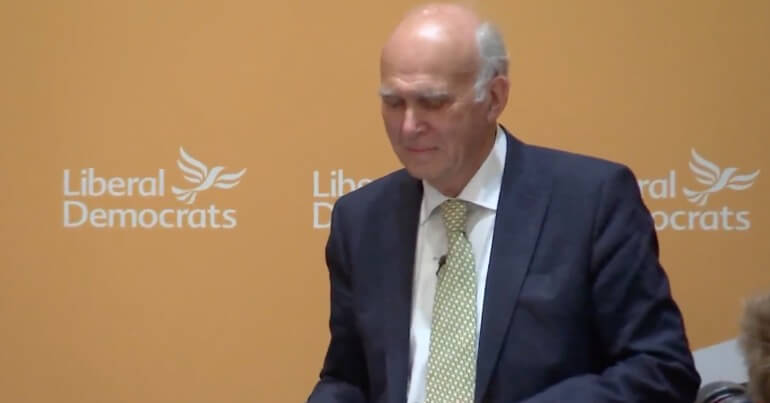 Vince Cable just suffered a massive blow to his plan to relaunch the LibDems during a humiliating interview with ITV News. The blow being that people don’t seem to know who he is.

The humiliating interview saw ITV London ask Londoners if they know who the current leader of the Liberal Democrats is. Only two respondents knew his name, with others guessing he was “the guy that was on the dancing”. Almost half admitted they didn’t have a clue who he was, with one person thinking that Tim Farron was still in charge.

We asked ten people at random to name the leader of the Liberal Democrats. How many got it right? pic.twitter.com/oeQm77DIuT

ITV presented the results to Cable during an interview, stating: “We asked Londoners this morning if they could name the leader of the Liberal Democrats… out of 10, just two knew your name”.

A flustered Cable criticised the results stating: “Well that was a very peculiar sample, because I think most of the surveys I’ve suggested [show] not that people know my name, but they actually approve of it”.

Watch ITV News London ask people to name the leader of the Fib Dems. Only 2 out of 10 name Cable.
Cable’s response: surveys he’s seen show not only that most people know who he is but approve of him ? ? ?

He just is the comedy gift that keeps on giving. pic.twitter.com/xGOhgn16P4

Vox pop polls like this are a bit of a TV cliche and don’t really prove much. But still, it was an unwelcome blow for Cable. And it couldn’t have come at a worse time for the LibDem leader as he attempts to cement his ambitions for the party at its annual conference. Following the LibDems’ disappointing result in the general election, Cable will be looking forward to his opportunity to address his members and revitalise faith in his party. Let’s just hope for his sake that his members know who will be addressing them.