We need to talk about last night’s Panorama. Because it was nothing but PR for Theresa May. - The Canary 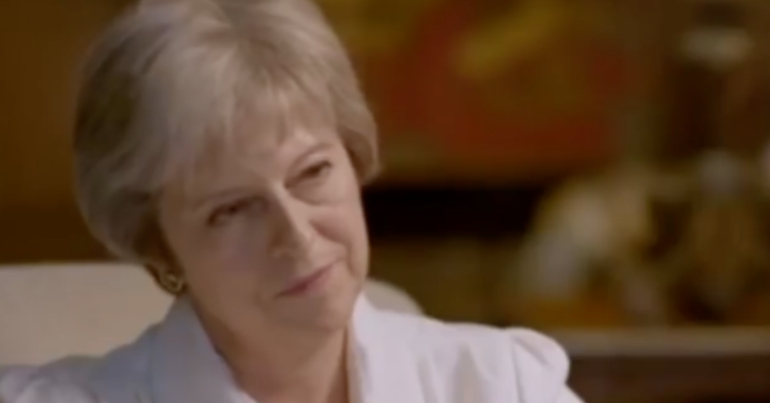 On 17 September, the BBC broadcast an episode of Panorama called Inside No 10: Deal or No Deal? But instead of being a hard-hitting documentary on Theresa May, this was nothing short of a party political broadcast for the Conservative Party. And as people are pointing out, this leads to serious questions about our supposedly neutral and impartial public service broadcaster.

Nick Robinson fronted the programme. As people highlighted, Robinson was the perfect choice for a May PR extravaganza:

How lucky is Theresa May!

On #Panorama the BBC are giving her 30 minutes of prime-time tv to sell her Brexit plan & Nick Robinson will be asking the questions. pic.twitter.com/Xht1YJ7RjG

Writing in the Times, Robinson admits the purpose of May’s team allowing the documentary was for good PR amid the Brexit negotiations and party infighting:

That is the reason I and a team from BBC One’s Panorama were invited “Inside No 10” to make a film which they hope will pull back the curtain just a little on the serious, shy, and, at times, awkward leader they serve.

While Robinson claims that his past affiliation with the Conservative Party doesn’t affect his work with the BBC, the programme would not have disappointed the Downing Street marketing team:

Soft focus, with a deliberate slight blurring or lack of definition. Simpering and obsequious. Given an easy ride…It’s Tory Love Island on BBC1 at 8.30pm tonight.#Panorama https://t.co/A7eb6iMGo8

Newsround would do a better job than #panorama in holding the Tories to account. As deep as a sheet of graphene.

Many people suggested that the programme was just a party political broadcast:

Dear @BBCPanorama, why are you dressing up a Tory party political broadcast as a serious interview?

Is the BBC scared of losing its funding? #Panorama #r4today https://t.co/4hnFZsgGHr

Last week I praised BBC Panorama for the Academies docu. I said it was BBC at its best seeking truth about corruption. Last night on Panorama they reverted back to PR dept for Conservative party.

Other people also wondered what had happened to Panorama‘s hard-hitting investigations:

I always thought #Panorama was the BBC investigative flagship. Fuck me, was I wrong. A demonstration of world class arselicking. This kind of biased television will get the BBC done away with.

The programme led people to question the purpose of the BBC:

This #panorama episode wouldn’t look out of place on a tinpot dictatorship state channel. An utter insult to millions of BBC viewers.

BBC demonstrating once more that they are the masters of media manipulation, a masterclass in state propaganda. #Panorama

Others lamented the death of journalism on the BBC:

The day impartial critical journalism died at the BBC#Panorama

If you're British and over 50 it was virtually any weekly documentary series on BBC or ITV:Man Alive, World in Action, Panorama etc.

A lost world of intelligent and objective journalism.

Given the BBC’s supposed neutrality, people had a question for the broadcaster:

Yo @BBC when is your Panorama Special taking place with Jeremy @jeremycorbyn? Will it be a Labour supporter interviewing him, so as to keep things fair? Would you say that you are politically unbiased as a media organisation funded by the taxpayer?

To recognise the BBC's pledge to impartiality, can we now expect a #Panorama programme with @OwenJones84 interviewing @jeremycorbyn at the back of a double decker bus?

Although others already had the answer:

We’re running a story on Corbyn for weeks about being a commie spy. Get the graphics dept to mock up a pic of him in Russian red against Kremlin backdrop and wearing a commie hat!

And ask them to get a soft focus filter ready for Theresa May.#Panorama

No ….Corbyn & Labour will only get a Panorama hatchet job, not a free party political broadcast like tonight.

The BBC are determined to keep the Tories in power.

We need to talk about the BBC…

The BBC is funded by the taxpayer through the licence fee. In return, it’s supposed to provide impartial and unbiased coverage. Robinson writes that:

I, along with many other broadcasters, have been asking for an interview with the prime minister for many months. She has proved remarkably reluctant to give one.

But if the PM is “reluctant” to engage with interviewers, the answer is not to give in to her every whim and demand. This was essentially a sycophantic puff piece on a PM who is making a mess of the Brexit negotiations with potentially disastrous consequences. And that’s without mentioning the misery her government is causing through Universal Credit, child poverty, record numbers of homeless people and cuts to essential services.

We need to have a serious conversation about the BBC. Because that Panorama only served as grease for the wheels of the May PR machine. And we should all expect and demand better from our public service broadcaster.