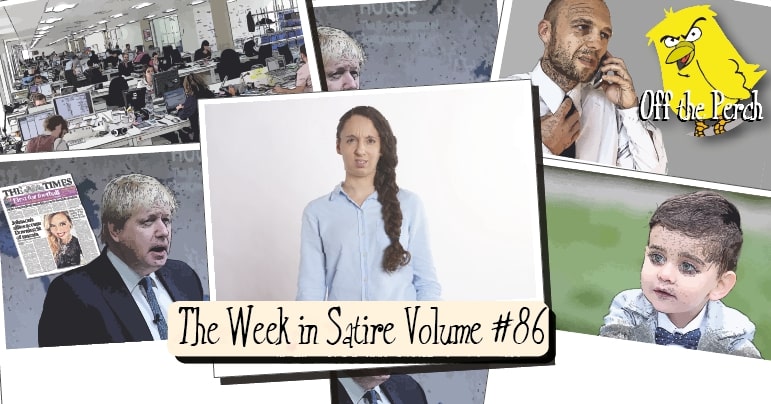 Editor of the @JewishChron assumes bankers = Jews in an attempt to prove Jeremy Corbyn is antisemitic, thus being more antisemitic than all of the still unresolved geniune incidents of antisemitism in the Labour Party ???? pic.twitter.com/Sa9Cmm5JMM 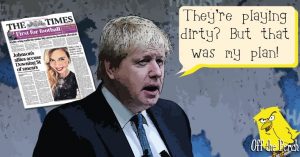 Boris Johnson has been working against Theresa May’s government since she took power. He now seems poised to make his run for the leadership, but he failed to predict one thing. Namely that signposting his coup for two years would give Downing Street 24 months to prepare for it.

Although to be fair, no one could have predicted this government would be prepared for something.

We spoke to the UK’s leading Johnson observer to find out what’s going through the former foreign secretary’s mind:

There are two main schools of thought on Johnson. Some say he’s a buffoon; others think he’s a Machiavellian genius. I subscribe to a third school. This school acknowledges he’s always scheming while simultaneously recognising his plans are usually shit, and that he primarily skates by on privilege and connections.

Johnson could have spent the past two years making allies and formulating an actual Brexit plan. Instead, he spent them:

As such, he’s made it easy for May to counter his coup. And let’s just repeat that, because it means Boris Johnson – the alleged heir to Churchill – has prepared for two years only to find he can’t even challenge Theresa May – a prime minister so weak that she isn’t allowed to fire rogue ministers without their permission.

So remember, although Johnson pretends to be dumber than he is, that doesn’t mean he’s as clever as he thinks. 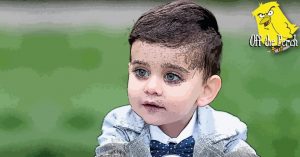 Even that wasn’t the limit, though. The narrative changed to ‘Brexit will be completed within our lifetime’.

Turns out they’re not even confident in that anymore. As such, the government has employed a five-year-old Brexit minister who can somewhat confidently claim they’ll live to see Brexit’s completion.

The toddler in question is none other than Odysseus Rees-Mogg – heir to the lordship of Reesmogginshire. When asked if he shared his father’s views on Brexit, Odysseus said:

Daddy said Brexit is paying for our new castle.

The little minister was asked what he thought of Theresa May’s Chequers plan. By way of response, he blew a raspberry.

He was also asked when we could expect to see Brexit completed. After several long minutes of calculation, the young minister turned to an aide and asked:

Could you get me the bigger abacus?

According to one report, the government is drawing up plans for each successive Rees-Moggling to inherit the title of Archduke of Brexit. As such, the timeline could be extended for as long as we have Rees-Moggs. 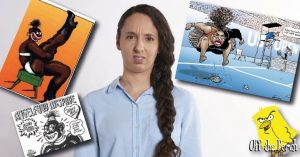 A cartoonist for News Corp’s Aussie tabloid the Herald Sun drew a racist cartoon of Serena Williams on 10 September. The reason it’s racist is because it uses tropes that were historically used by racists in racist cartoons – tropes like:

The cartoonist responded by saying:

You can’t expect me – a professional cartoonist – to know anything about the history of cartoons.

The counter argument is that someone who works with things like symbolism, cartoons, and politics should know something – especially if they’re getting paid for their work. Not knowing is like trying to become a guitarist without learning about tuning. You could, but who would pay to listen to the hideous noise you produced?

The Herald Sun editor took the defence further, claiming that:

Before all this happened, we never even knew what racism was. It’s really not fair to expect us – as people in the information industry – to be widely informed.

It was explained that ‘no one is saying non-racist cartoons should be banned – primarily because they’re not racist’. The editor shouted in response:

You said ‘non-racist cartoons should be banned’ – I’m printing that!

The Herald Sun is owned by Rupert Murdoch’s News Corp. A spokesperson from the evil news conglomerate claimed:

You can’t expect us – as the people who own Fox News and The Sun – to know what is or isn’t racist. It’s not like we get people contacting us on a daily basis to shout ‘THIS IS RACIST – WHY DO YOU KEEP PUTTING THIS SHIT OUT!?’. You’re really not being fair.

So yes – how could any of the numerous people involved in publishing this cartoon have known? 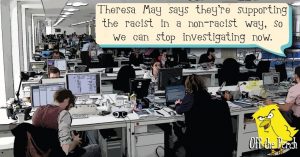 There was a big investigation this summer into whether or not Jeremy Corbyn is a racist. There was less attention put on the Tories, who on 12 September threw their support behind the blatantly bigoted Hungarian PM. Don’t worry, though – the media got in touch with Theresa May, and she’s assured them it’s all on the up and up.

In a speech from earlier the same day, May said:

I have a picture here of a man who calls himself a socialist. If you look at his face, you can tell he’s thinking something rotten. I don’t know what it is, but I can assure you it’s Jeremy Corbyn’s fault!

The media has been doorstepping Jeremy Corbyn over ‘PicturedBadThoughtsGate’ ever since:

Defending herself, May said:

Because the print media is increasingly poorly funded, less and less investigative journalism is being commissioned. This story shouldn’t need investigation, though. The Tories supported a tinpot Mussolini in full public view – how is that getting less attention than the time Corbyn didn’t quite bow enough? 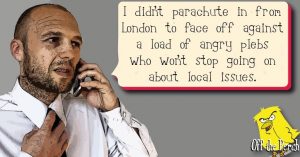 ‘Mandatory reselection’ would see local Labour members choosing who will stand as their MP in the event of an election. The process should prevent areas getting MPs that are:

Most people would agree that such a democratic system is fairly uncontroversial in a democratic society. It’s also likely to pass with ease when voted on at the upcoming Labour conference. So why are outlets like the Guardian still referring to it as ‘controversial’? Who is it controversial with?

After doing a bit of digging, Off The Perch has found out who’s opposed to the idea.

It turns out the people most ardently against making politics more democratic are bad politicians. Ironically, this serves to show why mandatory reselection is needed. If a person only became an MP after several years of scratching Tony Blair’s war-loving back, they probably weren’t a suitable candidate.

One MP told us:

It’s ridiculous! I’ve spent half my life perfecting the ability to sound like I have policy ideas. Now I’m going to lose my seat to someone who openly just talks about policy. If I’d known ideas were going to be important in politics, I wouldn’t have wasted all that time aggressively not having any!

Of course, there are several things crap MPs can do to stop themselves being deselected:

The other option is to carry on crying to the Guardian and see if that’s any more effective now than it was three years ago.