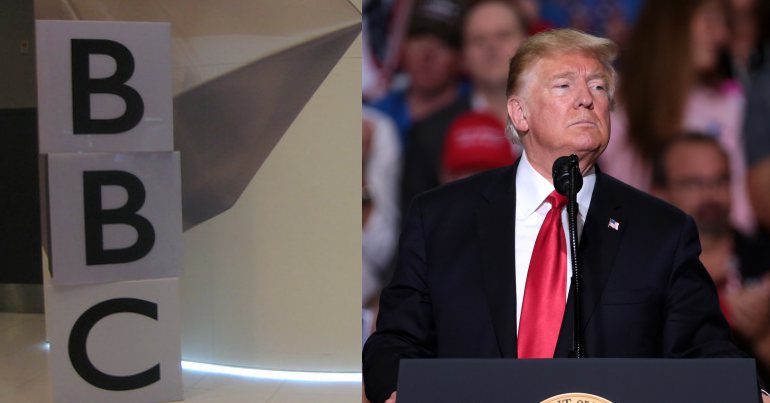 The BBC has openly refused to call Donald Trump’s latest vile words out as racist. On 18 July, host Evan Davis claimed it was for the audience to “debate” whether Trump’s racism is “a matter of fact or is just an opinion”. Many listeners were outraged because the BBC also played two minutes of Trump’s “chilling and horrifying” speech and failed to counter any of his xenophobic lies.

On 14 July, Trump issued a series of undeniably racist tweets. He told four progressive congresswomen of colour to “go back” to their “broken and crime infested” countries.

Since then, his fans have pushed the racist attacks against congresswoman Ilhan Omar further. Pumped up by another racist and nationalist attack from Trump, supporters chanted “send her back” at a rally.

Quite few of you have asked us to describe his [Trump’s] behaviour as racist, as a matter of fact rather than as a matter of opinion. In the end, we just strive to be as neutral as we possibly can be. You can debate what neutrality means and whether we meet that standard. You can debate whether the assertion of Trump’s racism is a matter of fact or is just an opinion. But whichever it is, the most important thing is that we report on what is going on in the US for you to frame your own judgement.

Barack Obama’s former speechwriter, Jon Favreau, called this rally “one of the most chilling and horrifying things I’ve ever seen in politics”.

The crowd at Trump’s rally chanting “send her back” after the President viciously and dishonestly attacked Ilhan Omar is one of the most chilling and horrifying things I’ve ever seen in politics.

Yet the BBC gave this same vicious, “chilling” attack two minutes of uninterrupted airplay. “No comment,” Evans said, “no need for comment.”

“If you are neutral in situations of injustice, you have chosen the side of the oppressor”

Many people were outraged by the BBC broadcast.

Some explained why failing to counter Trump’s lies about Omar, or offer any additional commentary, was so hugely problematic:

I just heard #BBCradio4 #BBCradio4PM #BBCPM @BBCPM broadcast 2 minutes of a Trump rally in which he demonises Congresswoman Ilhan Omar, without any commentary or correction of untruths – why was this allowed? Where is the Congresswoman's right to reply? #IStandWithIlhan

Cowardly of #bbcpm to play 2 mins of Trump (so we can make up our own minds if he’s a racist or not) without pointing out that he is LYING about #Omar.
That’s pretty relevant, don’t you think @EvanHD ? Need all the facts to make up our minds.

#BBCPM disgraceful really for @EvanHD to subject listeners to 2 minutes of Trump at rally attacking @IlhanMN culminating in crowd chanting "Send Her Back, Send Her back" without Evan making any attempt to identify Trump's distortions. Even @piersmorgan now admits Trump racist.

And this is vitally important. Because as Politico reported, before the chant went up:

the president tore into Omar specifically, mischaracterizing past controversial statements by the congresswoman related to the 9/11 terror attacks and Al Qaeda that conservatives have seized upon.

Trump also said Omar – a critic of Israeli crimes against Palestinians – had “a history of launching vicious, anti-Semitic screeds” and presented a total distortion of her position on the crisis in Venezuela. He’s since claimed he “was not happy” with the crowd’s response. But for “roughly 15 seconds”, he was silent and simply watched. And he’s yet to apologise for his original racist tweets.

Others, meanwhile, pointed out that claiming to have ‘no position’ is actually taking a very clear position:

I would suggest to #bbcpm that by not taking a position on whether Trump/Trump's statements are racist as a matter of fact, you are taking a position. If it you believed in their inherent racism you would report it as such.

Agreed. In appearing neutral, the #BBC effectively condones such things, because you either challenge or you accept. Each day #Trump looks more and more like the fascist so many of us know him to be. History warns us not to look the other way. Dangerous times.

One Twitter user quoted Desmond Tutu’s famous quote: “If you are neutral in situations of injustice, you have chosen the side of the oppressor”.

Trump’s appalling response to far-right violence in Charlottesville in 2017 showed just how dangerous his racist views are. He’s also continued to fuel a terrifyingly fascist onslaught against immigrants and refugees.

This isn’t Trump’s first racist attack; and it’s unlikely to be his last. So for the BBC to refuse to call him out shows just how little we can trust its output. This broadcast wasn’t “neutral” – it tipped right into propaganda.