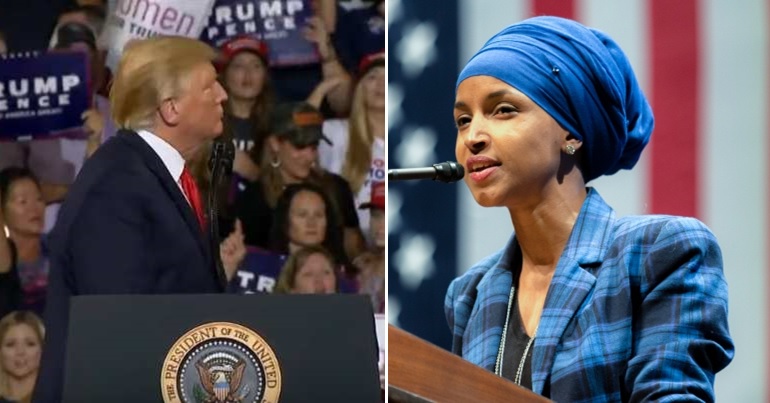 Donald Trump has been attacking progressive congresswoman Ilhan Omar for months. But his rhetoric stepped up this week when he told her – a refugee and the first Somali-American member of congress – to “go back and help fix the totally broken and crime infested” place she came from.

But he left something out of his attack; the fact that Washington has been helping to destroy Omar’s home country for many decades. He also failed to mention his own role in escalating violence there.

Omar was born in Somalia in 1981. Her family fled its brutal civil war while she was a child; and in 1995, after four years in a refugee camp, they moved to the US.

The US, meanwhile, had helped to destabilise Somalia since before Omar’s birth. This started with Washington’s alliance with dictator Siad Barre, who ruled from 1969 to 1991. In 1977, Barre invaded Soviet-allied Ethiopia after US-backed Saudi Arabia reportedly offered him $200m to abandon peace talks. In a declassified 1978 CIA cable, a Saudi politician told the US:

We do not care about Somalia… We will do anything you can convince us makes sense to get communism out of Ethiopia.

Saudi Arabia and other US allies backed Somalia throughout this war. And Barre depended on aid from these countries until his downfall in 1991.

Not only did the war cause widespread death and destruction, it actually backfired terribly on Somalia as it became catalyst for the rebellions that overthrew Siad Barre in 1991 and caused the turmoil and lawlessness that have plagued Somalia ever since.

It continued by explaining:

The Saudis appeared primarily concerned with consolidating their grip on the Red Sea and surrounding areas. Ethiopia (prior to Eritrea’s unofficial independence in 1991) was a Red Sea state and it was opposed to Saudi Arabia both politically and ideologically… the U.S. decided to capitalize on the opportunity to gain a foothold in the region —by arming Somalia.

US aid for Somalia’s dictator paved the way for disaster

the fall of the shah of Iran, and the Soviet invasion of Afghanistan… enhanced Somalia’s strategic importance as a potential component of an evolving American Rapid Deployment Force for the Persian Gulf…

U.S. military and economic aid to Somalia from 1978 to 1989 formed part of a semi-coordinated, multilateral effort between the U.S. and its Western and Arab allies, particularly Saudi Arabia.

The Chicago Tribune reported that:

In exchange for access to the Berbera base…, the U.S. directed more than $850 million in military, economic and food aid to Somalia during the 1980s…

Symbolizing the American stake, the U.S. in late 1989 completed a lavish $50 million embassy in the Somali capital, Mogadishu, complete with three swimming pools and a staff of 430, the largest in sub-Saharan Africa.

Menkhaus also spoke of “generous financial assistance from Saudi Arabia” which helped Barre to buy $580m-worth of weapons from 1979 to 1983. He also insisted that:

The result of U.S. policy was really to encourage the breakup of Somalia

From Barre to Trump – the destruction continues

After losing the war with Ethiopia, Barre’s regime became more corrupt and nepotistic. And favouring his tribe over others, he launched a genocidal attack (with US weapons and US-trained officials) on the Isaaq clan in 1988. This reportedly killed over 100,000 people (figures still vary today). Hundreds of thousands more fled as refugees.

In 1992, the US army entered the country in a military mission called ‘Operation Restore Hope‘. And as Common Dreams reported earlier this month:

Special Operations forces are still on the ground there and U.S. air strikes against a Somali militant Islamic group, al-Shabaab, have actually been on the rise in the Trump era.

Indeed, as authoritarian US allies in the region continue to compete for a strategic foothold in Somalia, Trump has tripled the number of annual airstrikes there. But as the Independent has insisted, al-Shabaab “exists in large part because of blowback from US foreign policy”, and its:

unifying idea is opposition to Somalia’s Western-backed government — so no amount of bombing by the US is going to stop the pipeline that created them. It’s exactly that which empowers them.

The Trump administration is rapidly escalating a secretive air war in Somalia… with little congressional oversight or media attention.

The US also continues to face accusations of killing Somali civilians.

According to the UN:

Over 870,000 Somalis are registered as refugees in the Horn of Africa and Yemen, while an estimated 2.1 million men, women and children are displaced within the country itself.

Take a look in the mirror

As Trump and his supporters call for Omar to return to Somalia, they should take a long, hard look in the mirror. Because as is all too often the case, it’s the US political establishment (Trump included) that’s responsible for destroying that country. And only a radical shift in US foreign policy will “help fix the totally broken” places Washington has spent decades smashing into submission.