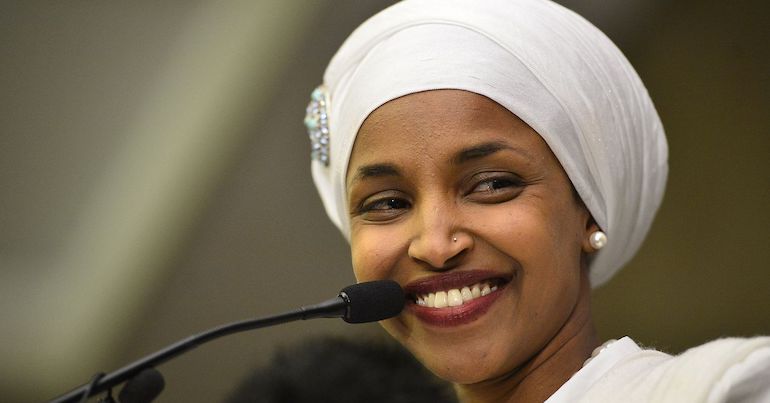 Calls are growing to suspend Donald Trump’s Twitter account. Because on 12 April, he pinned a vile video-led tweet of progressive congresswoman Ilhan Omar. And she’s since seen a rise in death threats, and needs extra security.

Trump’s tweet (still up at the time of writing) intercut images of Omar with video footage of 9/11. He used Omar’s words entirely out of context and also implied that she’d downplayed the gravity of those attacks. Over 90,000 people retweeted Trump’s tweet, and over 250,000 ‘liked’ it.

This is what she actually said: pic.twitter.com/mMzKTTeThR

an increase in direct threats on my life – many directly referencing or replying to the president’s video.

As she also explained:

Violent rhetoric and all forms of hate speech have no place in our society, much less from our country’s Commander in Chief. We are all Americans. This is endangering lives. It has to stop.

Over 150 “progressive groups and individuals” have also signed a letter of solidarity. And support is growing for Omar across social media:

We joined more than 150 other progressive groups and individuals to sign a solidarity letter in support of Rep. Ilhan Omar as she continues to be subjected to vile, Islamophobic attacks.

Omar and Rashida Tlaib are the first ever Muslim women elected to congress. Omar’s already stood firm to challenge the ongoing human-rights abuses in occupied Palestine. In doing so, and by refusing to pledge allegiance to Israel, she’s faced vicious smears calling her antisemitic (including from Trump).

Many people feel Trump’s latest attack on Omar is dangerously Islamophobic. As Benjamin pointed out:

“Ilhan’s real crime for those attacking her is that she’s an unapologetic Black Muslim woman who acts and speaks like she’s equal.” #IstandwithIlhan

following the President’s tweet, I spoke with the Sergeant-at-Arms to ensure that Capitol Police are conducting a security assessment to safeguard Congresswoman Omar, her family and her staff.

But many people, including Tlaib, pointed to a “lack of support” from some Democrats:

They put us in photos when they want to show our party is diverse. However, when we ask to be at the table, or speak up about issues that impact who we are, what we fight for & why we ran in the first place, we are ignored. To truly honor our diversity is to never silence us. https://t.co/7T1OlwS1YG

Others, meanwhile, noted that this isn’t a new pattern of behaviour from Trump:

Trump's history of inciting violence against Muslims started well before his recent attacks on Rep Ilhan Omar – he has been stoking hate versus Muslims for years and Trump's fans have answered by plotting to kill Muslims. My new @thedailybeast article: https://t.co/fecyKktUZ8

Violent crimes and other acts of hate by right-wing extremists and white nationalists are on the rise in this country… We can no longer ignore that they are being encouraged by the occupant of the highest office in the land.

So as thousands of people come together to stand in solidarity with Omar, one thing’s clear: Trump’s words and actions must not go unchallenged. He is clearly inciting hatred, and he shouldn’t be anywhere near Twitter – let alone ‘leading’ a country.