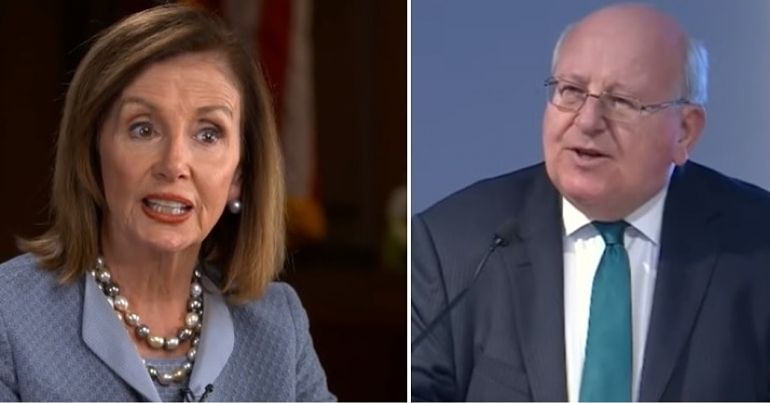 US Democratic Party leader Nancy Pelosi met with three former Labour MPs on 14 April. Two of them helped found The Independent Group after leaving Labour. The speaker of the house of representatives tweeted:

Important discussion with former Labour Party MPs @MikeGapes,@ChrisLeslieMP & @IanAustinMP to hear their perspective on Brexit, why they left the Labour Party, and the importance of standing unequivocally against anti-Semitism wherever it is found. pic.twitter.com/RcQKfjd37d

In a recent interview, the speaker of the house, whose net worth in 2015 was estimated at more than $100m, confirmed her ‘rejection’ of “socialism”, and pushed her intention to “hold the centre”. Pelosi is clearly free to meet with whomever she sees fit. And she also met with Labour leader Jeremy Corbyn. But Twitter users were quick to respond to what they perceived as one group of pro-war and pro-corporate establishment types meeting another.

Supporters of the Iraq war, austerity and the Saudi regime. And you should ask children's author @MichaelRosenYes about how much Ian Austin stands against antisemitism.

Wall Street-funded neoliberal Democratic Party leaders in the US are openly helping their center-right Blairite counterparts in the UK wage war against Corbynism, falsely smearing it as "anti-Semitic."

Transatlantic conference on how best to import a fabricated "crisis" of antisemitism as a hammer against the left in defense of the dying neoliberal consensus. https://t.co/2ggV3l6LLz

The Canary has detailed how anti-Corbyn and establishment elements have been ‘weaponising antisemitism’ to push a “witch hunt” within the Labour Party, to smear the pro-Corbyn left. Pelosi is herself known for “staunchly pro-Israel” positions which include blaming Hamas for the Israeli slaughter of civilians in Gaza in 2009.

It's not a co-ordinated cross-Atlantic smear campaign against progressives and progressive values. Honest.

Novara Media’s Aaron Bastani, who is of mixed-Jewish heritage, said:

One tweeter explicitly drew connections to the ‘antisemitism’ smears against US congresswoman Ilhan Omar:

So so disappointed in you – these people represent nobody but themselves

The slams just kept coming in:

Sorry to point this out Nancy but that is a really crap focus group.

They only represent themselves. You'd be better off chatting to some random people on a bus.#SelfCentristParty@TheIndGroup

Pelosi’s choice to meet with neoliberal former Labour Party MPs should surprise no one. But as the replies show, the wider public will not keep quiet about what they believe this symbolises.