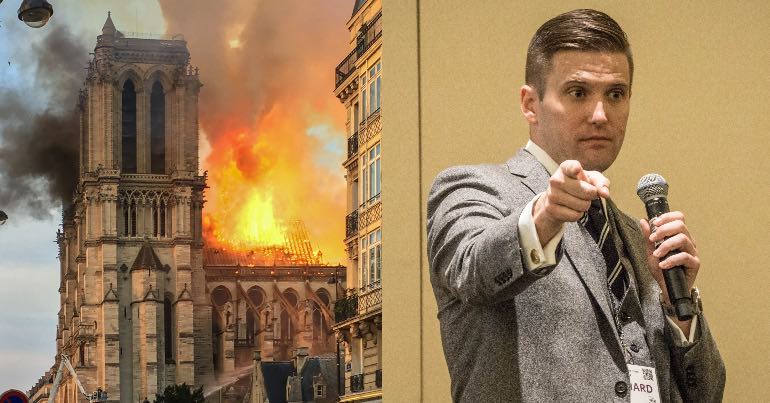 The famous Notre Dame cathedral in Paris has been damaged by a fire. And it didn’t take far-right figures long to kick their selective outrage and conspiracy theories into gear.

Roughly 850 years old, the cathedral was undergoing renovations when it caught fire on 15 April. Officials say this work could be the cause of the blaze. It took about 500 firefighters to bring the fire under control and save the cathedral. Even so, it has suffered damage such as the collapse of its spire and the loss of its roof.

The images were striking, and attracted much sympathy online:

The far right jumps on the bandwagon

Officials have said they are “treating the fire as an accident, ruling out arson”. But this hasn’t stopped far-right figures from suggesting that arsonists attacked the cathedral. In Ireland, former journalist Gemma O’Doherty seemed to blame the French state for the fire:

‘The burning of #NotreDame should be seen as an act of war by the state on the Church. 200 years of Free Masonic war on the Church in France is enough to justify our suspicion’ https://t.co/06o6oJSTyL

Another far-right populariser went further, arguing that “communists” could also be to blame:

Suspecting arson at Notre Dame doesn’t indicate who could be responsible.

Some French churches were desecrated via Satanic symbols.

A victim of clerical abuse could be seeking revenge.

But it was far-right leader Richard Spencer who was the most outspoken:

If the Nortre Dame fire serves to spur the White man into action–to sieze power in his countries, in Europe, in the world–then it will have served a glorious purpose and we will one day bless this catastrophe.

The focus of the far right on the Notre Dame fire is highly selective, of course. Because as the cathedral was burning, the Al-Aqsa Mosque in Jerusalem was also reportedly aflame:

It's been contained but the parallel is eerie. https://t.co/ZlIQsFzkqw

There have been numerous other times, of course, when the far right has failed to sing and shout about the destruction of important buildings. During Operation Protective Edge in 2014, for example, Israel attacked 203 mosques in Gaza, destroying 73. Daesh (Isis/Isil), meanwhile, did away with numerous ancient sites in both Iraq and Syria. And it destroyed some mosques in Syria which were over 900 years old. Yet those on the far right weren’t making a fuss about any of this.

More recently, there has been concern about the targeting of Black churches in Louisiana. Three were destroyed in suspected arson attacks in less than a week, for example.

Western ally Saudi Arabia, meanwhile, has destroyed thousands of buildings (including dozens of historical buildings and mosques) during its bombing campaign against Yemen:

But none of this seems to matter to the far right.

Far-right hatred is becoming more prominent. Hate crimes have increased in the US in recent years, according to the FBI. And the same seems to be true in Britain. As a result, lives are being put at risk.

One tool far-right figures use to get attention, meanwhile, is to take high-profile non-political issues and exploit them to stir up hatred and division.

We must combat this whenever and wherever it appears.