Assange ‘must answer for what he has done’, says Hillary Clinton - who backed devastating wars abroad - Canary Workers’ Co-op 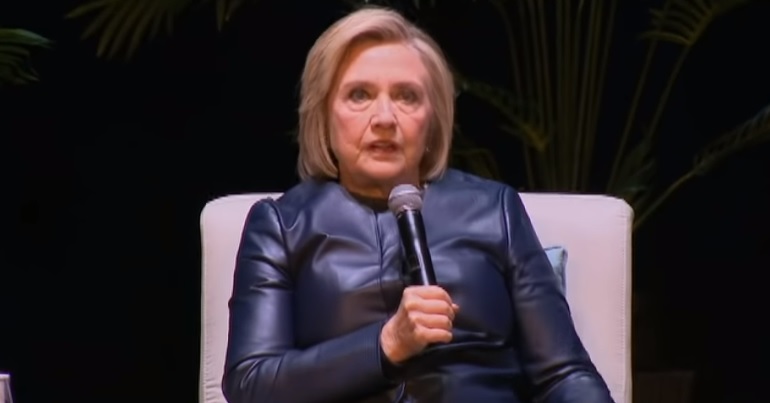 Hillary Clinton recently told an audience in New York that Julian Assange “must answer for what he has done”. The problem is that, while Assange has helped to reveal the horrors of US intervention abroad, Clinton has supported them.

Clinton made the statement during a Q&A with her husband, former US president Bill Clinton. This was the same day her close ally Neera Tanden suggested Assange was a ‘fascist’. Clinton, who has backed multiple wars and coups over the years, was responding to a question the host of the event put to her after Assange’s arrest.

It is clear from the indictment that came out – it’s not about punishing journalism; it’s about assisting the hacking of the military computer to steal information from the United States government.

The Canary‘s review of the indictment shows that Clinton’s argument is disingenuous at best. The charges relate to Assange’s alleged communications with his source in 2010 that led to the publication of the Iraq War Logs and the Afghan War Diaries.

What has Assange ‘done’?

Veterans for Peace UK recently released a statement praising Assange and WikiLeaks‘s role in publishing these documents, which:

Among the 90,000+ documents from the Afghan War Diaries is discussion of “Task Force 373”, a US special forces assassination squad, whose death count included seven children in just one operation.

Assange also faces allegations of sexual assault from women in Sweden. The most serious case is currently inactive, but Swedish authorities are reportedly considering reopening it. Assange’s lawyer has insisted that “Julian has never been concerned about facing British justice, or indeed Swedish justice”.

What has Clinton ‘done’?

No doubt part of Clinton’s opinion of Assange is down to the fact that WikiLeaks has helped expose so many of her odious policies and those of her allies. Clinton backed the illegal invasion of Iraq, for example, and also pushed the disastrous ‘regime change’ operation in Libya.

Other disturbing policies include:

1) Clinton apparently knew a ‘no-fly zone’ in Syria would involve heavily bombing Syria and ‘killing a lot of civilians’; but she publicly called for one anyway as late as October 2016:

2) Clinton knew Saudi Arabia and Qatar were funding and arming reactionary groups like Daesh (Isis/Isil) in Syria – but she continued to support ‘regime change’ in the country:

3) Clinton backed the 2009 coup in Honduras, which continues to devastate the country, despite being fully aware of its illegality:

4) While she was secretary of state, her department intervened to prevent a modest minimum wage hike in Haiti:

Hillary Clinton's State Department advocated on behalf of U.S. garment makers to stop #Haiti–the poorest country in the Americas–from upping its minimum wage: https://t.co/c91Y1JAUSp To me this was one of the ugliest @Wikileaks revelations. via @thenation

5) Clinton even admitted she needed to be two-faced, having one position behind closed doors and one position for US voters:

Secret paid Clinton speech: "You need to have a public position and a private position on policy" #PodestaEmails https://t.co/iAy8zjDnSn pic.twitter.com/tXwoZJ0O8N

"Debbie Wasserman Schultz PERSONALLY called up the President of MSNBC to apply pressure in relation to positive coverage about Bernie Sanders on Morning Joe!"@wikileaks Julian Assange on the DNC leaks after he was arrested by British Police

8) Finally, Clinton’s campaign actually ‘elevated’ Donald Trump, because they thought the ‘extremist’ candidates would be easier to beat:

After her abysmal failure to win the election, Clinton blamed everyone under the sun, including WikiLeaks, rather than herself and her campaign. So it’s no surprise that she’d like to see Assange punished now.

Many will continue to argue, however, that it’s Clinton herself who ‘must answer for what she has done’.