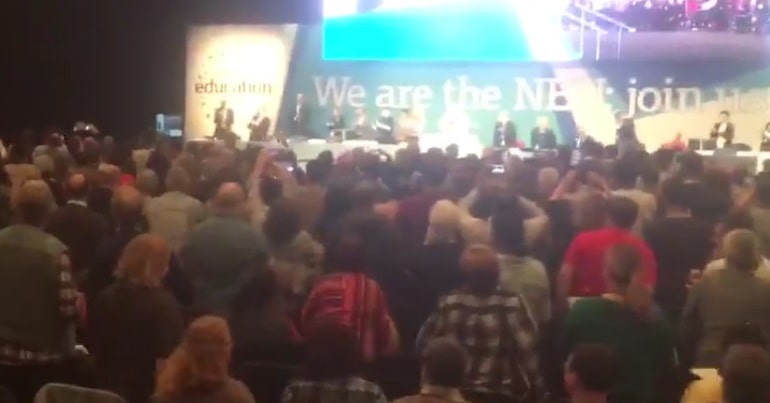 An announcement from Jeremy Corbyn brought about a standing ovation from a hall full of teachers on 16 April. At the annual conference of the National Education Union, the Labour leader announced that he would end SAT tests for seven- and 11-year-olds.

At primary school in particular children need the space and freedom to let their imaginations roam.

Instead at the ages of just 7 and 11 we put them through the unnecessary pressure of national exams.

Teachers are reporting instances of sleeplessness, anxiety and depression in primary school children during exam periods. And it’s even worse for children with special educational needs and disabilities.

So today I can give you this commitment: the next Labour government will scrap primary school SATs for seven and eleven year olds.

Standing ovation for @jeremycorbyn as he announces that @UKLabour will scrap SATS for 7 & 11 year olds when in Government. Let kids read, learn & be inspired rather than subjecting them to continuous, artificial testing. 👏👏👏pic.twitter.com/B19RYp2NVX

A former teacher told The Canary that, in primary school, SATs are used to generate concrete predictions for GCSE results, despite how young the pupils are.

The market has “invaded our schools”

In his speech, Corbyn also called out the ongoing privatisation of our school system:

The language and methods of the market have invaded our schools and universities and encroached on young people’s learning.

Academies and free schools have brought the private sector into the heart of our children’s education.

But have they improved results? Have they empowered parents? You know the answer to those questions.

The Labour leader then flagged up the ‘top-slicing‘ in the controversial academy system:

What they have done is introduce the concept of multi-academy trusts with chief executives on salaries of as much as £420,000.

So I’m proud that at the Labour Party conference last September, Angela Rayner our shadow education secretary announced that the next Labour government will immediately end the academy and free schools programmes.

And at the centre of that agenda is the creation of a national education service which will be the great legacy of the next Labour government.

It will remove the corporations from the classroom and the campus.

Because we believe that education is a right not a commodity to be bought and sold.

The national education service will make education freely available to everyone whatever their age from cradle to grave – just like the NHS.

The pledge stands in contrast to Conservative austerity. Six unions recently warned that schools face a shortfall in funding of £5.4bn, despite new spending commitments from the government.