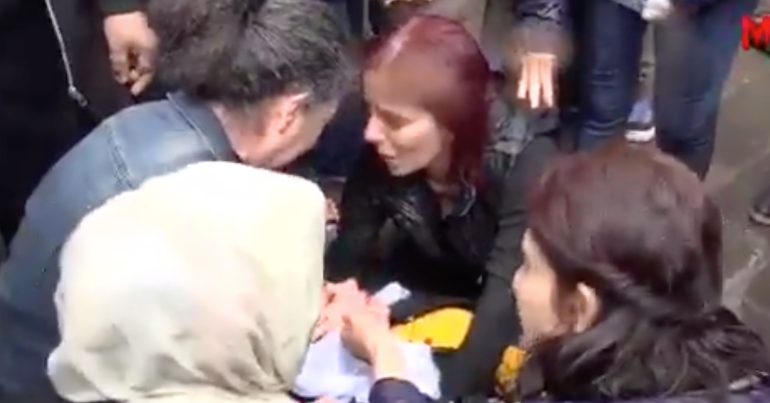 On 17 April, the wife of Turkish president and alleged war criminal Recep Tayyip Erdoğan received a “changemaker” award at the World Humanitarian Forum (WHF) in London.

Emine Erdoğan was given the award for her “key role in helping women and refugees, especially offering shelter to over 3.5 million who had to flee Syria”. And while her work must be seen separately from whatever her husband does, she apparently accepted the award:

on behalf of the generous Turkish people, whose hearts ache with a crying child, who see strangers as guests from God.

So it’s a shame her heart wasn’t aching when Turkish police fired water cannon and tear gas at elected politicians in Amed (Diyarbakır) on the same day.

WHF: not so humanitarian

To be fair, it seems the WHF itself is not so humanitarian. Because alleged war criminal Tony Blair is one of the speakers. And former foreign secretary Jack Straw reportedly led the awards panel:

Wife of Turkish dictator Erdoğan is being given a "humanitarian award" by a panel led by former UK Foreign Secretary Jack Straw.

The same Jack Straw who oversaw the Iraq War, extraordinary rendition and used the "War on Terror" to criminalise Kurds in UKhttps://t.co/UXOdro4In2

Is there anything more corrupted in this world than Jack Straw – who took the UK into the Iraq War and lied about knowing about extraordinary rendition – giving an award to the wife of Turkish dictator Erdogan, and lecturing us about "humanitarianism"?! pic.twitter.com/mFuakTa8Y2

The Kurdistan Solidarity Campaign also highlighted exactly why awarding Erdoğan the award is so problematic:

The "World Humanitarian Forum" (@WHForumLondon) founded by Tony and Cherie Blair is giving an award to the wife of Turkey's authoritarian President, who invaded Afrin last year killing thousands of Kurds and Yazidi refugees, and has destroyed Kurdish towns in southern Turkey pic.twitter.com/E5mWOJoUAU

Jack Straw, Tony and Cherie Blair give a "humanitarian" award to the wife of a fascist leader who has politically repressed @UKLabour's sister party HDP, locked up dozens of their elected MPs & mayors and thousands of activists, and colluded in the murder of their supporters pic.twitter.com/1mFncs3DSR

While Turkey’s heavily pro-Erdoğan press (the result of severe media repression) was lapping up this story, police were on the offensive in Amed.

Despite winning the local elections in many Kurdish-majority areas in southeastern Turkey, some left-wing HDP (Peoples’ Democratic Party) mayors have not been allowed to take office. People gathered in Amed to protest this decision. And they were met with tear gas and water canons:

Today in #Amed: Turkish police attacked with tear gas and water cannons a group of Kurds who were protesting against the YSK decision that not allows mayors to take office who were fired due to an emergency decree

HDP MP Remziye Tosun, meanwhile, was injured and hospitalised after being hit by a water cannon:

Pro-#Kurdish Peoples' Democratic Party (HDP) lawmaker Remziye Tosun falls after being hit by a police water cannon during a protest against results of the local elections, in Diyarbakir, Turkey, April 17, 2019. #Turkey https://t.co/I5AiZ5Tuaq pic.twitter.com/Ba4m4Jyu77

But then again, humanitarian is hardly a word any of us would associate with Blair and Straw in the first place.