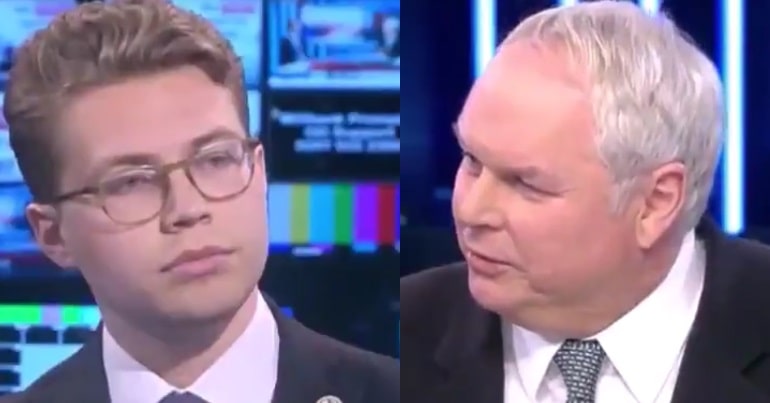 You’re a load of incompetent, middle-class, self-indulgent people who want to tell us how to live our lives, that’s what you are, isn’t it?

“You’re a load of incompetent, middle class, self indulgent people who want to tell us how to live our lives.”

I’ve had my share of criticisms of #ExtinctionRebellion, but this is absolute grotesque unprofesssionism from Sky News here. pic.twitter.com/YXSxsFqZrk

“Middle class” is quite the accusation from Boulton, who was educated at Westminster School – one of the most prestigious private schools in the country. And the personal attacks did not stop there. The presenter also referred to the demonstrator as “a right-wing fascist”.

The interview comes just a day after another Sky presenter, Jayne Secker, smeared a tenant facing eviction as “incompetent”. And Secker, a landlord herself, also faced widespread condemnation.

“Millions of people are going to die”

Earlier in the show, the protester explained:

Thousands of people are out on the streets to tell the truth, that we are in a climate and ecological emergency. And that millions of people are going to die.

In October 2018, the UN warned we have 12 years to reduce the oncoming climate catastrophe. And this may downplay the problem because if we hit climate tipping points, that could set off an unstoppable chain reaction.

Whatever you think of Extinction Rebellion, this campaigner is right. Sitting governments are sleeping at the wheel, leading us towards climate catastrophe. And Boulton seems quite happy to continue riding the merry-go-round towards oblivion.

In the UK, the current manifesto of the main opposition party – Labour – pledges to roll out local, publicly funded renewable energy firms across the country to rapidly decarbonise the economy. It’s a matter of urgency that we support this, as well as the type of direct action young people like the school strikers, are taking.

If you thought the @SkyNews no-fault housing eviction interview was bad, this one tops it…

"You sound like a right-wing fascist," @AdamBoultonSky tells the @ExtinctionR campaigner, patronising and offending him throughout the interview #ExtinctionRebellion #rebelforlife pic.twitter.com/2DtBrE4YVz

Featured image via I was a JSA claimant/ Twitter