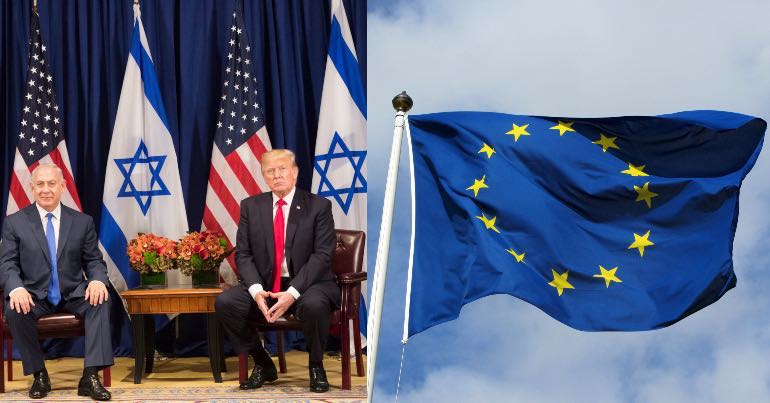 Dozens of formerly high-level European politicians have written that a solution to the Israel-Palestine conflict could soon be out of reach as a result of US behaviour.

In a letter published in the Guardian on 15 April, the politicians wrote that Europe must take the lead in finding a solution to the conflict, partly by stressing support for Palestinian statehood. This, they insist, is because the US has “distanced itself from established international legal norms”. The signatories include former Irish president Mary Robinson.

In the letter, the former officials point out Europe’s commitment to international law. They write that this is because:

International law has brought us the longest period of peace, prosperity and stability our continent has ever enjoyed.

For decades, we have worked to see our Israeli and Palestinian neighbours enjoy the peace dividends that we Europeans have through our commitment to that order.

They argue that Europe traditionally pursued this plan along with the US. And this, they said, “is still a milestone of transatlantic foreign policy cooperation”.

But the signatories note that the Donald Trump administration “has departed from longstanding US policy” of supporting a ‘two-state solution’. It has also “distanced itself” from international law, they maintain. Overall, they argue the US:

has so far recognised only one side’s claims to Jerusalem and demonstrated a disturbing indifference to Israeli settlement expansion.

Included in this is the Trump administration’s suspension of funding for the United Nations Relief and Works Agency and “other programmes benefitting Palestinians”. In short, they say, the US is:

gambling with the security and stability of various countries located at Europe’s doorstep.

Because of this, they insist that Europe must “be vigilant and act strategically”. They announced that, overall:

We believe that Europe should embrace and promote a plan that respects the basic principles of international law as reflected in the agreed EU parameters for a resolution to the Israeli-Palestinian conflict. These parameters, which the EU has systematically reaffirmed during past US-sponsored talks, reflect our shared understanding that a viable peace requires the creation of a Palestinian state alongside Israel on borders based on the pre-1967 lines with mutually agreed, minimal and equal land swaps; with Jerusalem as the capital for both states; with security arrangements that address legitimate concerns and respect the sovereignty of each side and with an agreed, fair solution to the question of Palestine refugees.

Anything less than a two-state solution, they say, will “fatally damage the cause of a durable peace”.

The letter comes as the extreme right has emerged victorious in the recent Israeli general elections, with Benjamin Netanyahu set to serve a fifth term as Israel’s prime minister. Netanyahu had said previously that he would annex Israeli settlements in the West Bank if he was re-elected.

In the lead-up to the Israeli elections, meanwhile, Donald Trump called for recognition of “Israel’s Sovereignty over the Golan Heights”. He has since signed a decree in favour of this.