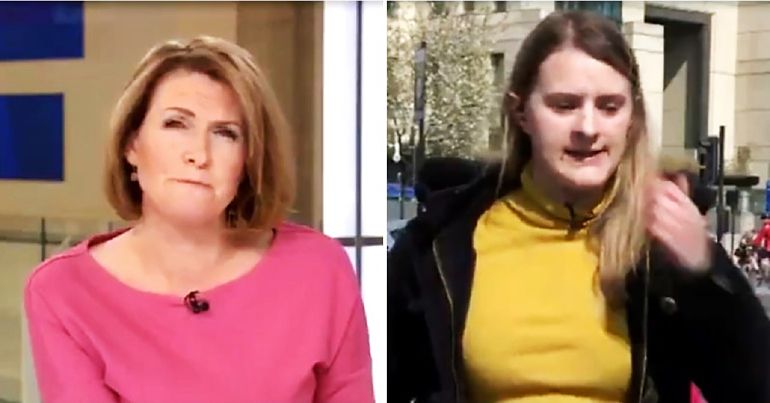 The government’s plan to revoke Section 21 and stop the easy eviction of tenants by landlords has received a cautious welcome.

But based on her recent performance, one person who’s less keen is Sky News presenter, and landlord, Jayne Secker. And Secker’s lecturing of a campaigner for secure tenancies again reveals the ingrained class bias of the British media.

Think of the poor landlords

Under the existing Section 21 Notice, landlords can give as little as eight weeks notice before eviction. This leaves tenants scant time to relocate, and raises the risk of homelessness.

But Secker had little sympathy for tenant campaigner, Kirsty Archer, in an interview for Sky News. Instead, she seemed more concerned about the suffering of landlords like her:

In the interview, Secker suggests the difficulties faced by evicted tenants are the same as those faced by landlords when tenants choose to move out. She then goes on to tell her own tales of life as a landlord.

Many observers felt the interview exemplified a mainstream media totally out of touch with reality. As Owen Jones put it:

In another glorious day for Britain's oh so impartial broadcast media, a Sky News presenter who is a private landlord uses an interview about Britain's housing crisis to slag off private tenants. https://t.co/e5MmEmRSZ0

This is truly sickening stuff from @SkyNews presenter and landlord @JayneSeckerSky. She has zero interest in the plight of tenants facing extortionate rents and traumatic evictions, instead complaining about young people's inability to change a lightbulb. @kirstar19. @Ofcom aware https://t.co/auPdUE7Lk4

Others felt Secker showed a smug attitude throughout the interview:

The smug look on the face of that Sky News presenter whose also a landlord telling that girl whose just been evicted that its her fault cos she once had tenants that can't change a light bulb is the reason landlords will be the first ones to go pic.twitter.com/7YMU1VPBzI

Secker clearly felt the intense heat on social media after her performance. And she felt compelled to acknowledge the incident:

Clearly yesterday I got the tone and content of an interview wrong and it has upset many people. I am sure many of us will have made a mistake at work – unfortunate for me mine is a lot more public than most. Please be assured I have taken the many comments on board. Mea culpa.

But she only admitted getting the “tone” wrong. She ignored her own major conflict of interest as a landlord.

Some felt Secker’s words were a classic example of a non-apology. BBC writer Sally Abbott was unsatisfied:

@SkyNews This isn’t an apology, this is someone worried about their job. An enormous misjudgement yesterday. Obviously wearing her landlord and not journalism hat. Appalling. I suggest you apologise properly Jayne. Melius facit!

The campaigner shouts back

Archer had this to say about her experience:

I was not told beforehand that I would be interviewed by a landlady or had no idea how condescending and insensitive her line of question will be. Let's get more working class people presenting news shows next ✊ #EndSection21 https://t.co/EFjIRnceFg

And her call to “get more working class people presenting news shows next” hit the nail on the head.

This is about class, privilege, and their domination of the media

As Archer alluded to, the privileged classes dominate the British media. Faiza Shaheen of the thinktank Class commented:

Couldn’t get a better example of the rich and powerful dismissing working class issues. This presenter inadvertently admits her biases- imagine if the vested interests of the media and political elite were better known? Many things would start to make a lot more sense https://t.co/iA3plmMLV3

Media bias towards the interests of property and wealth is a predictable consequence of privilege dominating media. Journalist Richard Hall described this previously in the Independent:

Until the media reflects all society and not just the comfortably off, don’t expect sympathy for tenants anytime soon.