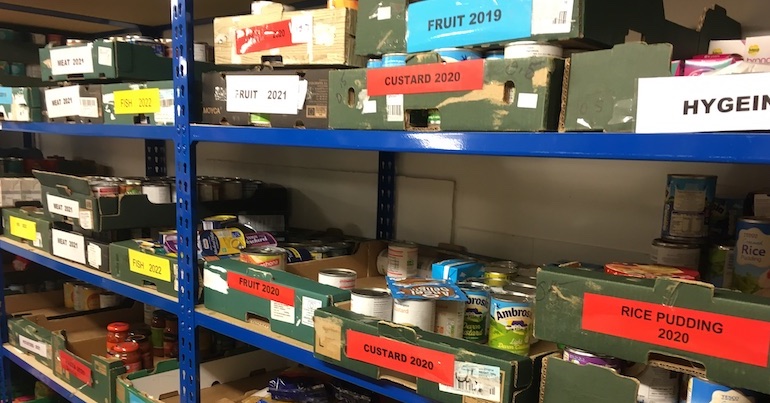 Schools around the UK are breaking up for the summer holidays. But for many families, this brings a new challenge as many simply can’t afford to eat. New figures from the Trussell Trust foodbank network show that demand soared 20% last summer. And this year, it expects to see the “busiest summer ever”.

THREAD: No child should face going hungry but #foodbanks in our network are expecting their busiest summer ever. Last year, there was a 20% increase in the number of children needing emergency food during the school holidays. This isn’t right. But we know #ThisCanChange > pic.twitter.com/ZB9mbvGexZ

“My meals for the week…”

The Trussell Trust found that in 2018, “87,496 food parcels went to children in the UK during the summer holidays”. This was a 20% increase “on the same period in 2017”. As it noted, holidays place extra financial pressure on families who are eligible for free school meals in term time.

Against a 19% rise in people needing to use foodbanks in 2018-19, it’s concerned “that this summer will be the… busiest to date”.

She also pointed out that foodbanks “cannot, and must not, be a long term solution to poverty”. Because as Revie noted:

Every family should have enough money coming in for a decent standard of living. No child should face going hungry in the UK.

One Twitter user shared an image that shows the stark reality for families who are forced to use food banks:

My son needs GCSE books for September. Now saving up for them.

My meals for this week. homemade Mexican rice, a peach for each day & oats with water for breakfast. This is everything I can afford to eat for next 5 days. #FoodPoverty #HungerHolidays #FoodBanks pic.twitter.com/ZAhOBrwSrx

In April, the Trussell Trust revealed that foodbank use in the UK hit a record high. It handed out 1,583,668 three-day emergency food packages from April 2018 to March 2019. Over half a million (577,618) of these went to children. It noted that this “is an 18.8% increase on the previous year”. And over the past five years, the number of food parcels handed out across the UK rose 73%.

The charity has also been conducting research into the impact of Universal Credit and food bank use:

#UniversalCreditUncovered Wk 9: Over the past 9 weeks we've been uncovering the stark reality of what it can be like living on #UniversalCredit & how the 5+ week wait for a 1st payment has pushed people into #poverty, forcing many to use #foodbanks to get by #5WeeksTooLong > pic.twitter.com/Cnyne0pdUM

Meanwhile, others noted that as Theresa May prepares to leave office, these shocking figures highlight the true legacy of her time as prime minister:

Nice of the beeb to launder her reputation. These ppl are psychotic https://t.co/Ra3O9lovvc

And the soaring figures also foreground the shocking levels of inequality in the UK. While millions of people are forced to use foodbanks, the wealthy peers in the House of Lords “are gorging on tax payer funded fine wines & cuisine”:

Whilst over a million citizens are forced into foodbanks, Lords are gorging on tax payer funded fine wines & cuisine https://t.co/YG7131OZgw

As the summer holidays start, the fact that so many families don’t know how they’ll cope is a shocking indictment of nine years of Tory-led cuts and austerity. No parent should ever need to worry that they can’t afford to feed their child. No child should ever have to go hungry. We need to rise up together to demand change and equality now so that children and their families don’t starve.