Tory leadership hopefuls Boris Johnson and Jeremy Hunt recently refused to label comments from Donald Trump ‘racist’. Given Johnson’s history, that’s no surprise. Now, people are drawing attention to comments Johnson allegedly made about the European leaders he’ll soon have to work with:

The man soon to be Britain's PM was heard:

– Asking whether Angela Merkel was in the East German Stasi.

-Wondering why the Irish premier "isn't called Murphy like all the rest of them?"

– Calling Macron a "jumped-up Napoleon." and the French "turds".https://t.co/wvdE7lOd0B

The comments appeared in a Financial Times opinion piece by Philip Stephens. Although it’s previously been reported that Johnson called the French “turds”, the rest appear to be new.

The “turds” comment was filmed by the BBC when Johnson was foreign secretary. The producers chose not to include the remark in their documentary. This information surfaced in June 2019, and according to the Independent, the Foreign Office asked the BBC to remove the comments because of “concerns it would make Anglo-French relations “awkward””.

On the other comments, Stephens wrote:

Mr Johnson’s crude English exceptionalism is even less endearing. At the Foreign Office he was heard to muse as to whether Chancellor Angela Merkel had served in East Germany’s Stasi secret police. French president Emmanuel Macron was a “jumped-up Napoleon”. As for Ireland’s prime minister, Leo Varadkar, “Why isn’t he called Murphy like all the rest of them”. Such jibes find a way back to foreign capitals.

These varyingly backwards and racist comments haven’t gone down well.

Britain has a long and inglorious history of repressing Ireland. English racism against Irish people continued (and, through figures like Johnson, continues) right into the modern age. As such, it’s easy to see why Irish people have taken offence at the comments:

Labour peer Andrew Adonis pointed out there could be real fallout from this:

I’m in Dublin today. They are keen to know whether Johnson did indeed say of Leo Varadkar: ‘Why isn’t he called Murphy like the rest of them?’ Er, well? https://t.co/EfBfxbp9a7

So here it is: if @BorisJohnson can’t understand and why The Taoiseach’s name isn’t Murphy, maybe we can help him out by changing our names to Murphy?
(Thanks @KarlBrophy for the suggestion)
@LeoVaradkar pic.twitter.com/XrH20I6vuL

One MSP pointed out why Johnson really is an embarrassment to the entire union:

Trumpesque comments like these are just one of many reasons why Boris Johnson is unfit for high office. On Taoiseach Leo Varadkar – “why isn’t he called Murphy like the rest of them?” https://t.co/tqeY5yyrYg

One man pointed out why Johnson’s Stasi comments were particularly offensive:

For Johnson to compare Angela Merkel to a Stasi officer when she grew up under its oppression or wonder why Leo Varadkar, of Indian extraction, isn't 'called Murphy like all the rest' of the Irish makes him no more fit for public office than Trump: https://t.co/JDaUcP6Hls

Perhaps unsurprisingly, however, Johnson’s comments about Macron and French people appear to have gone down well with the sort of voters he’s courting: 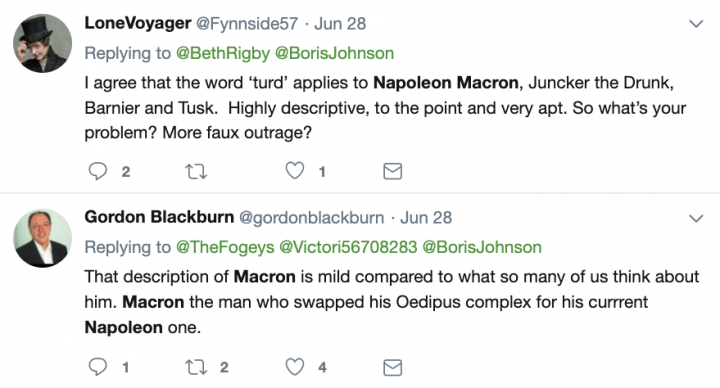 While calling out world leaders for their actions is a good thing, there’s obviously a world of difference between doing that in a statesperson-like fashion and resorting to schoolyard insults. Corbyn has been critical of Donald Trump, but it’s a criticism of his actions. It would be embarrassing if he called him a ‘hateful, orange Cheeto’. It would also be unproductive.

Unfortunately, ‘unproductive’ and ’embarrassing’ are all Johnson has to offer. That and racism. We already knew he was unfit to be PM. Each new revelation just brings that further into focus.