A major fracking firm has told The Canary that it is “not correct” that it’s in dire straits. This is despite countless claims to the contrary by residents and campaigners. So who do you believe?

Fracking company Cuadrilla has been courting controversy for quite a while now. It’s been the subject of countless demos, political criticism and campaigns. But at the centre of the row is the site at Preston New Road in Lancashire.

In July 2018, the government officially gave Cuadrilla the go-ahead to start extracting shale gas. But the decision drew protests from locals. Then, a judge jailed three activists (whom another judge promptly freed). But after a court case, bad weather and protests stopped it, Cuadrilla finally began work on 15 October. This led to more protests. Then, in late 2018, dozens of earthquakes occurred near to the site, just as Cuadrilla began to frack. Government regulations meant the company repeatedly had to stop work. This was due to the strength of the tremors.

But since before Christmas, rumours have surfaced on social media suggesting the firm is packing up its operations at Preston New Road.

Have the frackers had it?

#fracking equipment leaving @CuadrillaUK's Preston New Road site. All 5 pumps and the control unit have been removed. Could this be the end?
(pic from Tom Burke) pic.twitter.com/3JS12vbeZR

Wow. Even the silos are even being dismantled. Why would these need to be removed “just for Christmas”? Has Cuadrilla finally given up on Preston New Road? #BanFracking #WeSaidNo pic.twitter.com/gsK2zWQkVu

Compare today’s drone shot from Cuadrilla’s non-#fracking site (courtesy of MIM) with one from a few weeks ago. The rig has now gone #BanFracking pic.twitter.com/Hh5RBX9JWq

This activity continued into the New Year. People on the ground were reporting that Cuadrilla was still removing equipment:

According to our beautiful watchers, it seems Cuadrilla have packed up their #fracking rig & it’s ready to leave PNR. If it leaves and doesn’t return, that would be the best gift for 2019 #WeSaidNo #BanFracking pic.twitter.com/gdOLNZCk5a

AJ Lucas is Cuadrilla’s largest shareholder, owning 47% of the company. As Twitter user Lady_Claire points out, its share price has indeed dropped. Although it’s been trading badly for some years, it began falling sharply again around the time of the first earthquakes at Preston New Road in October. And so far, it hasn’t recovered: 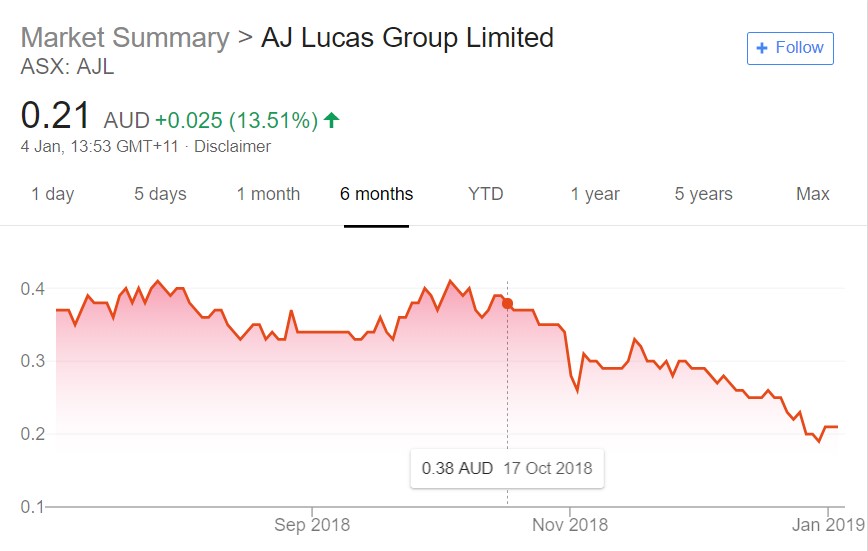 A spokesperson for Cuadrilla told The Canary it is “not correct” that it’s packing up operations at Preston New Road. The spokesperson said the firm:

continued to operate the shale gas exploration site at Preston New Road, near Blackpool, as planned. As per our statement in December, we have demobilised any equipment that we don’t own and isn’t needed for the next phase of operations, which is simply good business practice. We have completed current hydraulic fracturing operations and have moved to the next stage of work on site to flow test the well, as planned and previously stated.

But this isn’t exactly what Cuadrilla said in December. Because it mentioned nothing about demobilising ‘equipment it doesn’t own’.

When reports first started of Cuadrilla moving equipment off site, it told DrillOrDrop on 18 December:

Lancashire’s shale gas exploration company Cuadrilla today said it was demobilising some equipment from its exploration site before Christmas, but already looking forward to welcoming it back in 2019.

We] anticipated that equipment would be back on site in 2019 to continue operations within its current planning permission which includes the hydraulic fracture of the two existing wells at Preston New Road and completion of up to four wells in total for exploration purposes.

We won’t be facilitating interviews at this time or commenting further.

Cuadrilla echoed this in a statement on its website. So it’s unclear if equipment is coming back, or whether that which it doesn’t own won’t be.

Meanwhile, residents and campaigners have poured scorn on the claims.

We are all very well aware of Cuadrilla’s original plans to drill and frack two wells. For them to suggest that they are entering the next phase of operations ‘as planned’ displays a shocking level of disregard for people’s intelligence. The local community has watched them struggle to frack one well without breaching the seismic traffic light limits since mid-October. We are now watching them remove equipment at a tremendous rate.

We understand their need to penny-pinch while they hold their breath to see if they can demonstrate a viable flow rate. They probably have no other option given the way that investor confidence has tanked. But we feel that their attempts at gaining a social licence might be marginally more successful if they dealt more honestly with the local community. We are not stupid and would appreciate it if Cuadrilla would display more respect for the people of the area that they are imposing themselves on.

The Preston New Road Community Liaison Group (CLG) has also hit out. But in a twist of irony, the group was actually established by Cuadrilla itself in 2017. It did this to comply with planning regulations. Now, however, the group has once again turned on the firm.

A spokesperson for the CLG told The Canary:

At CLG meetings since 2017, Cuadrilla have repeatedly indicated that they intended to frack two wells and flow-test two wells by early 2019.

Community Representatives at these meetings are now keen to find out why plans have changed. Our suspicion has always been that shareholders and investor confidence is more of a priority for the company than the wellbeing of the community.

Given that residents’ fears about seismicity have come true, our concern is that Cuadrilla are being less than transparent and very selective in their public statements. It is hardly the clarion cry of a confident industry.

The fact that the CLG has such overarching concerns goes against Cuadrilla’s previous claims. For example, in January 2018, Cuadrilla’s chief executive Francis Egan told DrillOrDrop:

Sadly, alongside legitimate peaceful protest from those opposed to shale gas exploration we have seen a small minority of activists from outside the county conduct illegal protest including assaults, intimidation of small local businesses and road blockages. This has caused the most inconvenience to local people and businesses and on occasion the Emergency Services who rely on the main Preston New Road.

Many of the people I hear from in Lancashire are very supportive of shale gas explorations. They know how committed we are to putting Lancashire first in terms of jobs and revenue created by our operations.

But when its own CLG members (local residents) pour scorn on Cuadrilla, Egan’s protestations about people in Lancashire being “very supportive” don’t exactly stand up to scrutiny.

Only time will tell if Cuadrilla is pushing ahead at Preston New Road as planned, or if it is actually giving up on the site as people claim. But with a major court case against the government’s fracking policy looming, this beleaguered industry and one of its key players are looking more fragile by the day.