The Arctic has been burning for nearly two months and, yes, it's because of climate breakdown - Canary 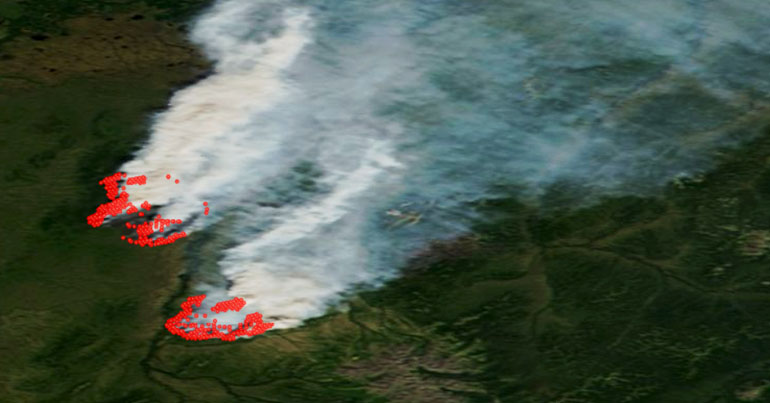 The Arctic is on fire. Forests and peatland are burning across Siberia, Greenland and Alaska. And the cause of these “unprecedented” events is clear.

Years of carbon within months

The World Meteorological Organization (WMO) said wildfires began at the start of June. And by 12 July, it had already tracked “over 100 intense and long-lived wildfires in the Arctic Circle”. The fires released 50 megatonnes of CO² in June alone, which the WMO said is similar to the total annual output of Sweden.

And the burning has continued. Climate scientist Mark Parrington said that by 21 July, the fires had released about 100 megatonnes of CO², similar to Belgium’s total annual output. Although wildfires are now a regular occurrence in the Arctic, Parrington described the scale of 2019’s outbreaks as “unprecedented”. And the news comes after Alert, Alaska, hit headlines for recording a temperature of 21ºC in mid-July. The month’s average for Alert is 5ºC.

Burning peatland is especially harmful. Environmental geography and wildfire expert Dr Thomas Smith said peat burns only when it’s “been disturbed by some significant environmental change”. And that’s because peat is “normally frozen or soggy”, even during summer months. But temperatures hitting record highs this year have dried it out. As a result, peat fire is highly damaging both locally and globally. Dr Smith explained:

Peat fires in the Arctic are part of a number of positive feedback mechanisms in the climate system. They release old carbon in the form of CO2 & methane emissions, exacerbating global heating, and they leave behind a dark charred surface leading to localised heating.

Peat fires can also burn underground through the winter, resurfacing in spring.

The WMO was clear that climate breakdown is responsible for the “positive feedback” effect of forest and peat fires. It said:

For instance, the 2014 megafires in Canada scorched more than 7 million acres of forest, releasing more than 103 million tonnes of carbon into the atmosphere – half as much as all the plants and trees in Canada typically absorb in an entire year, according to a study by NASA.

Such huge dumps of carbon into the atmosphere then contribute further to rising global temperatures, making forests and peatland more liable to burn. This vicious cycle is an example of ‘runaway climate change‘ when effects of climate breakdown spur the process on.

Arctic environments are “particularly sensitive” to the impact of the climate crisis, the WMO said. Smoke can cause snow and ice to absorb rather than reflect sunlight, causing the surface to warm faster. This also risks thawing permafrost, which contains an estimated 1.7tn tonnes of carbon that will be released as either CO² or methane. Methane is much more damaging to the climate than CO² in the short-term because it is better at absorbing heat. And a 2017 report showed the Arctic is now “warming at double the rate of the global temperature increase”.

Human-induced climate change has made the 2018 record-breaking UK summer temperatures about 30 times more likely than it would be naturally.

At present, the UK and Europe are experiencing extreme weather conditions, and these will only increase as the Arctic warms. But we’re relatively privileged. People in the global south aren’t just getting more days at the beach, they’re already dealing with disasters.

The situation is rapidly reaching a cliff edge, and we must do everything we can to hold those responsible to account. We owe it to ourselves and each other.