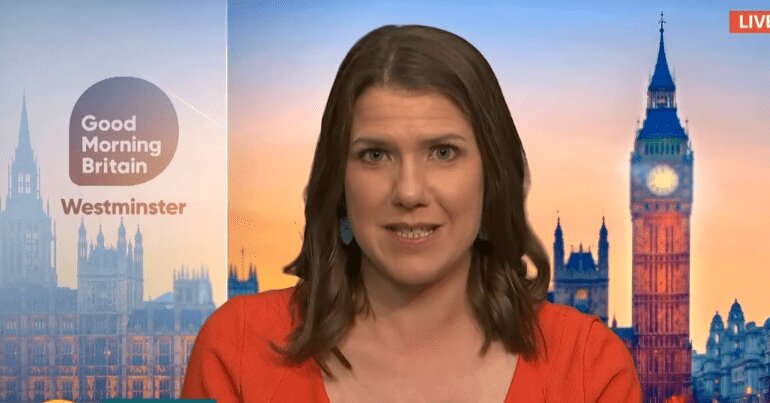 And the made-up story suggests the Lib Dems are still the same old power hungry chancers.

BBC host Justin Webb did not challenge her in response, but said he “absolutely” accepted her assessment of Labour’s Brexit position.

After her appearance, the Labour press office pointed out:

Hi @joswinson, on the #Today programme you claimed @jeremycorbyn took two weeks holiday in the referendum. That’s not true, could you correct please?

And then Swinson admitted it:

Swinson appears to be rehashing the Labour right’s 2016 attack line that the Brexit result was Corbyn’s fault. Even though analysis shows that it was the corporate media that marginalised Labour during the 2016 campaign. From Channel 4 to the BBC to Sky, 71% of the political sources on the main evening broadcast bulletins were from the Conservative Party, compared to just 18% from Labour.

It looks like Brexit was in part a kickback against the neoliberal establishment. Academic analysis shows the Leave vote was “strongly associated” with austerity cuts, imposed by the coalition government Swinson served in. The Labour right simply used the result as an excuse to launch a coup against Corbyn and try to regain control of the party from the membership.

Making up holidays wasn’t the only time Swinson stretched the truth on the same radio appearance. When Webb questioned her on the coalition government’s introduction of employment tribunal charges, she claimed:

Let’s be clear on the facts… I did not introduce those charges. Those were introduced by Conservatives and I fought against it

But she is telling porkies again. Whatever she may have done behind the scenes, Swinson argued in favour of the fees in parliament, saying they would “help claimants”.

Two days into her time as Lib Dem leader and Swinson has proved the party has got nothing. If the Lib Dems had an inspiring policy programme, their leader wouldn’t reduce herself to making up fantasies about Corbyn on the radio. Swinson has already shown that the Lib Dems are the same old chancers.