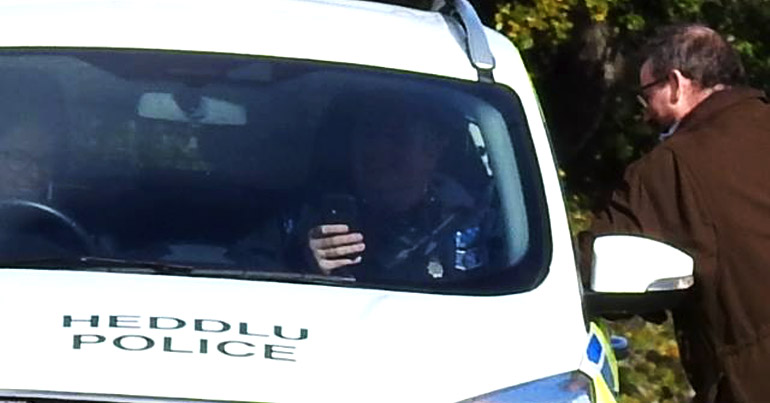 Court documents seen by The Canary shine a light on interactions between North Wales Police and a local hunt. And the details raise further questions over policing of anti-hunting activists.

North Wales Police charged Dafydd Hughes, who is part of North Wales Hunt Saboteurs, with assault following an incident on 22 December 2018. The sab group was at a meet of the Flint and Denbigh Hunt near Ruthin when Hughes clashed with hunt steward and local councillor Ed Lloyd-Ellis. As a result of the incident, police charged Hughes with common assault although the sab claimed Lloyd-Ellis grabbed him first. However, North Wales Police dropped the charge against Hughes just days after a court cleared two other members of North Wales Hunt Saboteurs of similar charges.

The Canary has seen details of the Crown Prosecution Service (CPS) case file. And they imply a relationship between Lloyd-Ellis and North Wales Police that Hughes says leaves him “absolutely horrified”.

The CPS document contains a statement that Lloyd-Ellis gave to police detailing events before, during and after the clash. In it, the councillor describes himself as a “Hunt Saboteur and Police liaison officer” for the Flint and Denbigh Hunt. He also says he has “held that role for seven years”. Lloyd-Ellis then says that police informed him on the morning of 22 December 2018 that:

they would be in attendance, predominantly to ensure that there was going to be no breach of the peace with regards to any Hunt Saboteurs that may attend.

Lloyd-Ellis then described his first encounter with the police drone team, which he said happened soon after 11.20am:

After about five minutes… I encountered the two officers, and they informed me that they had also had no reports of Saboteurs in the area. I did at that point assume that we would not have a hit from the Saboteurs on that day.

Lloyd-Ellis said he then tried to catch up with the Flint and Denbigh Hunt, which had already left the meet. After coming across hunt supporters, the councillor received a phone call from the police drone team. He said the officers told him that:

a minibus carrying Saboteurs had been spotted in the area, and that there were a number of Saboteurs getting out of the minibus.

This was the first time Lloyd-Ellis was aware that North Wales Hunt Saboteurs had arrived at the hunt. In his statement, the councillor said it was his “honest held belief” that there was a “high risk of… offences such as aggravated trespass, and/or public order offences” from the sabs. As a result, he wanted to help the hunt “get away”. This led to the clash that saw police charge Hughes.

Hughes told The Canary that the links between Lloyd-Ellis and North Wales Police “horrified” him:

I was absolutely horrified when I read… Lloyd-Ellis’s statement which confirmed the drone operators had [tipped] him off that sabs were in the area. I’d seen the drone operators out, one of them I recognised as I’d had previous dealing with him. I had thought he was one of the better officers from North Wales Police but not anymore, I hold him responsible for the assault on myself by Lloyd-Ellis.

The Canary asked North Wales Police if the links revealed in Lloyd-Ellis’s statement – including providing information on the whereabouts and numbers of sabs – contradicted its impartiality. In a response, Harrison said:

We have dedicated liaison officers who work with those involved in the hunt and also anyone who wishes to protest. We liaise with both sides and as I have pointed out previously, we facilitate lawful protest and also seek to keep the peace while trying to prevent any criminality.

We’d like to make it clear that North Wales Police will not interfere with those who seek to lawfully protest. As a force we have a strong history of protecting wildlife where we have the legal powers to do so. Any suggestion that we are not impartial in this regard is ill founded and disingenuous.

I won’t comment on individual cases, but will review with the command structure issues raised.

Hughes told The Canary, however, that the group hasn’t liaised with North Wales Police for a long time.

The Network for Police Monitoring (Netpol) told The Canary that North Wales Police’s response implied a disregard for protesters’ rights:

Harrison’s claim that North Wales Police liaise with both sides implies an even-handedness that is flatly contradicted by evidence given by Lloyd-Ellis. His statements describe liaison officers deliberately sharing information with the Flint and Denbigh Hunt in a way that is clearly intended to disrupt anti-hunting protesters and lead to situations that provide a spurious justification for their arrest.

The easiest way for Harrison to demonstrate the police’s impartiality is for him to simply reject Lloyd-Ellis’s witness statement as false. It is telling that he refuses to do so.

This looks less like facilitating lawful protest and more like the police collaborating with a powerful interest group to criminalise people who are simply seeking to protect wildlife by challenging breaches of the law.

Formal complaints have gone nowhere and calls for greater transparency have been rebuffed. Perhaps it is time for Arfon Jones, the local Police Crime Commissioner who has been supportive of protesters’ rights in other parts of the country, to intervene and ask questions about events happening on his doorstep.

The Canary also asked Lloyd-Ellis about his relationship with North Wales Police. He said:

The police never take sides, and they only pass information on to myself in the course of managing any potential problems that may occur as I manage the security of the events. On this occasion a female hunt supporter who was present with her young daughter was heavily intimidated by the sabs.

Lloyd-Ellis said this was in part due to two convictions of North Wales Hunt Saboteurs members this year, including Hughes. He also said that police “monitor the hunt to ensure that they are compliant with any legislation“.

But the sab group also described Lloyd-Ellis as “violent”:

A saboteur was assaulted on 22/12/18 due to a drone operator from @NWPolice telling a violent hunt member our whereabouts. #OperationYarder

The group has previously published footage showing Lloyd-Ellis in a “foul-mouthed meltdown”. And North Wales Police previously charged Lloyd-Ellis for assault but dropped the case. Meanwhile, a member of Welsh Borders Hunt Sabs accused Lloyd-Ellis of assault in 2015.

There are echoes of West Midlands Hunt Saboteurs’ experience of Leicestershire Police. In October 2017, the sab group published audio of an Atherstone Hunt meeting featuring a speech by a local wildlife crime officer. It accused the officer of “advising a fox hunt about which laws can and can’t be used against hunt saboteurs”.