After damning Netflix show, US authorities accused of trying to 'silence critics' - Canary 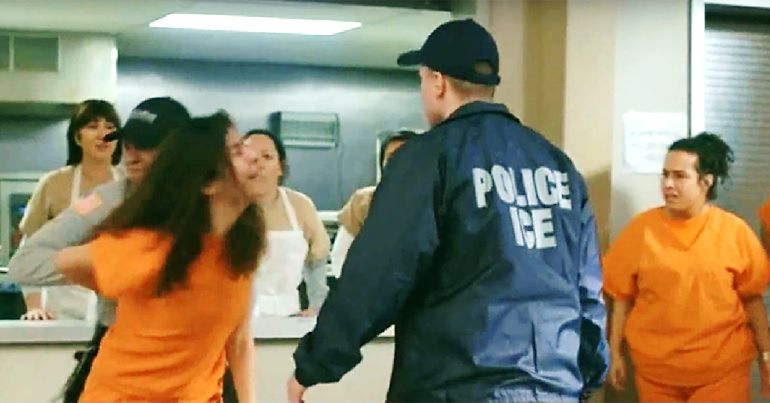 In early August, US Immigration and Customs Enforcement (ICE) shut down a hotline that had helped “tens of thousands of detained immigrants to obtain legal counsel”. This seemed to be in response to the helpline featuring in a damning Netflix show highlighting the horrors of immigration detention.

The powerful final season of Orange is the New Black (OITNB) named the Freedom for Immigrants ‘National Immigration Detention Hotline’ in one of its episodes. As the group wrote, “OITNB’s fictional portrayal of immigration detention could not be closer to the truth“. The organisation also pointed out that its connection to the show had attracted “widespread media attention”. Less than two weeks after the programme aired, ICE shut the helpline down.

By blocking access to Freedom for Immigrants’ hotline, ICE furthers community disenfranchisement and prevents the public from knowing about what happens inside these facilities.

The timing of the shut downs is deeply concerning. Freedom for Immigrants is being targeted for exposing abuses in detention and amplifying the stories of people suffering in the system

It’s practically impossible to do something as simple as place a phone call without money or without someone on the outside helping you, which is why Freedom for Immigrants’ hotline is so critical.

“ICE’s decision to shut down our hotline is an attack not just on people in immigration detention, but also on our rights to free speech and transparent government,” says co-founder @ChristinaFialho – https://t.co/u03fiC7TZ1

On 23 August, Freedom for Immigrants announced that it had sent ICE a “cease and desist letter“. It also sent a support letter from OITNB producers and actors, along with 121 other organisations, which said ICE’s decision:

The cease and desist letter, meanwhile, stressed that the shutdown was:

ICE reportedly told the group that it had simply removed its name “from the list of ICE-approved nonprofit and community groups”.

ICE relies on excuses to justify their violations to advocates' freedom of speech. We will not stand by their intimidation tactics
Read more here 👇🏽https://t.co/szP6ByLh4n

#OITNB featured a hotline for migrants detained by @ICEgov, who shut it down just weeks later. @MigrantFreedom has been a resource for migrants for years – they shouldn’t be punished saving lives and standing up for justice.https://t.co/5JD4yvaiw6

Fighting back against corporate and political cruelty

Freedom for Immigrants’ Liz Martinez has previously explained that:

And she pointed out that the detention ‘business‘ has grown in recent decades, stressing that:

immigration detention as we know it today did not exist really before the 1980s.

ICE terminated @MigrantFreedom's hotline after it was featured on Orange is the New Black. It was an invaluable resource for people in immigrant detention. This is fascism.

Here's a video I produced with their help: https://t.co/Br0vXgOJVy

In short, such detention isn’t something that just started under Donald Trump’s administration, even if the levels of cruelty have risen. Indeed, establishment favourite for the 2020 Democratic presidential nominee Joe Biden reportedly “spent his career helping build the very deportation state now in Trump’s hands”, both as a senator in the 1990s and as Barack Obama’s vice president.

Fortunately, groups like Freedom for Immigrants and shows like OITNB shine a crucial light on the horrors of immigration detention. And hopefully, the more people know, the more they’ll resist.