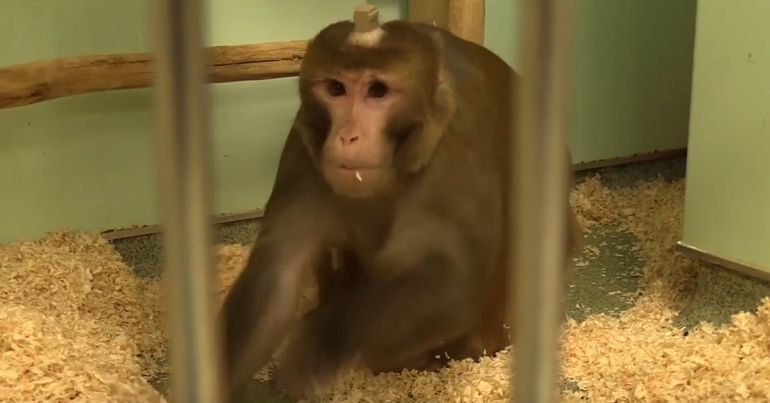 There was a “huge spike” in the use of one in the use of one particular type of monkey for research in the UK during 2018, according to Animal Defenders International (ADI). The group reports that the country’s use of monkeys born to wild-caught parents skyrocketed that year.

In the previous four years, laboratory use of these primates stood at an absolute minimum. That’s in tune with EU law, which dictates that the use of these primates must be phased out by 2022. But the UK is, of course, on the precipice of leaving the union. And, if its actions in 2018 are anything to go by, the Conservative government could become increasingly regressive on animal welfare standards once free of the EU’s ‘grip’.

To be clear, the EU is no champion when it comes to animal welfare. Just recently it scuppered international efforts for a full-scale ban on the export of African elephants to foreign zoos at a global wildlife meeting. But it has made some commendable efforts to limit animal suffering. For example, it has declared its commitment to ultimately end all animal experiments. It’s also phasing out the use of the children of wild-caught monkeys – known as F1 primates – in experiments by 2022.

ADI says the UK is one of the largest primate users for research in Europe. Its president Jan Creamer said:

The public will be horrified to learn that not only is Britain still a major primate user in Europe but it allows researchers to use monkeys whose parents have been taken from the wild and used as breeding machines too. The UK is effectively encouraging dealers in Vietnam and Mauritius to keep stocking their breeding factory farms by trapping wild monkeys.

ADI also says its investigations into lab monkey breeders in these countries revealed shocking conditions. It documented “baby monkeys being torn from their screaming mothers to be tattooed, pregnant monkeys manhandled and pinned down”, and “animals confined to small rusting cages which were in a state of collapse”.

In response to a request for comment, a Home Office spokesperson said:

The UK has one of the most comprehensive animal welfare systems in the world and we are committed to the proper regulation of the use of animals in scientific research.

This research helps us to ensure that medicines are safe to use and to find treatments for cancer and other diseases, among a range of other benefits.

Our legislation provides a rigorous regulatory system that ensures animal research and testing is carried out only where no practicable alternative exists and under controls which keep suffering to an absolute minimum.

It’s not only primates that are suffering under the UK’s current testing regime either. Although the media hailed the slight reduction in the total number of animal experiments in 2018 when the Home Office released its statistics in July, it skimmed over one ghastly fact. The number of experiments on dogs has seen a 16% increase. Labs used 2,909 dogs in 4,481 experimental procedures in 2018, according to Animal Free Research UK.

Clearly, the UK government, and the various institutions involved in this practice, don’t see these creatures as no-go beings for experimentation. That’s the case now when the country is still bound to the EU. It’s likely that human’s closest relative (primates) and ‘man’s best friend’ (dogs) will fare even worse once Brexit is done and dusted.