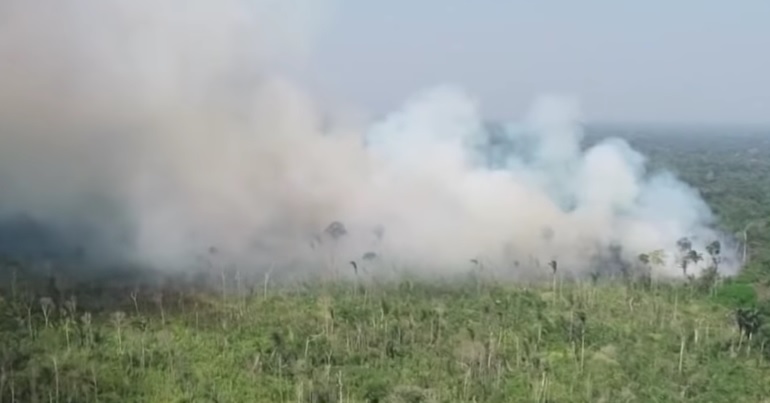 The BBC has revealed shocking facts about the UK’s connection to Brazilian forest fires. They show that, despite Boris Johnson claiming to be “deeply concerned” about fires raging in the Amazon, the UK is highly complicit in deforestation in Brazil through its trade practices.

One of the worst offenders in the EU

On 9 October, the BBC reported on a renewed push by Greenpeace to stop UK companies importing Brazilian products linked to the fires. Specifically, the environmental group is calling for a halt on soya-bean imports (largely “used to feed farm animals”) which have links to deforestation. Fires are often deliberately started to clear land for agriculture. In its report, the BBC explained:

Some 2.5 million tonnes of soya beans are imported into the UK each year, with a large proportion used to feed farm animals.

And just 14% of total soya imports are certified “deforestation free,” according to the Sustainable Trade Initiative – one of the lowest rates in the EU.

Soya based foods like soya milk, tofu and meat replacement products are also made from soya beans, but the companies tend to be smaller in scale and more able to trace their supply chain.

The public broadcaster reported that data from Trase.Earth showed 78% of soya bean imports from the UK’s largest importer, Cargill, came from Brazil in 2017. The BBC says Cargill “acts as a middleman between farmers and food companies”. The company questioned this figure, telling the broadcaster is was “not accurate and significantly inflated”.

In their latest push against deforestation, campaigners are highlighting an area of Brazil less well-known than the Amazon: the Cerrado. A 2006 moratorium on the trade of soybeans grown in deforested areas of the Amazon significantly slowed production there. Since the election of Jair Bolsonaro last year, however, forest fires there have increased exponentially, up 80% by August compared to figures in 2018.

But since the moratorium, Greenpeace says soy production has moved to the Cerrado, with a devastating impact on the area:

Brazil’s Cerrado is a beautiful region; home to thousands of endemic species. Indigenous peoples and traditional communities depend on it for their livelihoods and have bravely fought to protect the Cerrado for centuries, facing violence and threats. But the Cerrado is being wiped out. It is estimated that nearly half of the region’s natural vegetation has already been cleared to make way for soya and cattle farms.

Indeed, in a Nuffield Farming Scholarships Trust report, the author talks about soy production in a Brazilian state that contains parts of the Cerrado:

During my time in Mato Grosso, Brazil, I saw the full scale of soybean production with vast areas of land laid down to soybeans.

The Royal Welsh Agricultural Society and McDonald’s sponsored that report.

The BBC says it has seen analysis that suggests “Cargill has been buying soya directly from farms in the region of the Cerrado responsible for forest fires”. The Rapid Response monitoring system is responsible for that analysis – a partnership project between MapHubs, Mighty Earth and Aidenvironment.

In relation to claims about deforestation by one farm, which it has admitted to buying soya from, Cargill told the BBC:

We will take immediate action if illegal activity is found.

As the BBC pointed out, some UK retailers, such as Tesco, Sainsbury’s and M&S have pledged to make sure their supply chains are deforestation-free by 2020. But the broadcaster says they’re likely to miss this target. Some fast-food outlets also say they’re making efforts to limit the amount of deforestation involved in their products, via financial credits, assessments, and deforestation-free pledges of their own. But Greenpeace’s head of forests Richard George says:

All of the big fast-food companies use soya in animal feed, none of them know where it comes from and soya is one of the biggest drivers of deforestation worldwide.

There’s one sure fire way to limit complicity in these forest fires, for UK retailers and individuals. They can transition to predominantly plant-based food menus and diets. This will not only remove the demand for the animal-linked agriculture that leads to deforestation but will help tackle the climate crisis too.