After a 'heartbreaking arrest' at the climate protests, a lawyer asks 'is this what it's come to' - Canary Workers’ Co-op 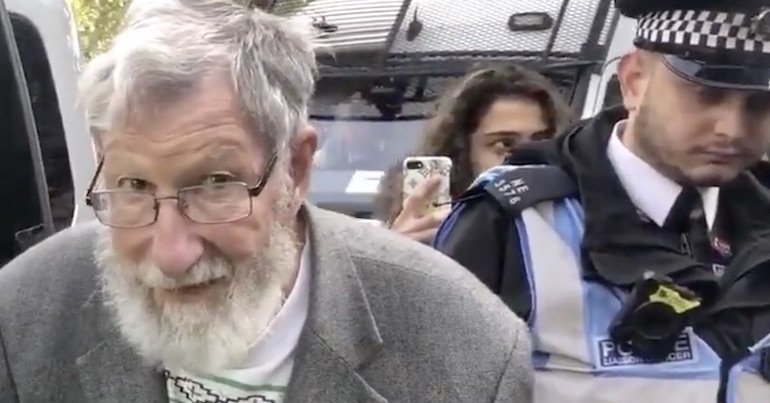 People around the world are taking part in protests to hold governments to account over the current climate breakdown. According to the BBC, police have arrested at least 600 people at climate protests in the UK since 7 October.

But the video of one man’s arrest raises important questions about the action taking place to halt the global climate crisis. It also shines a light on the UK’s policing strategy.

“Is this what it’s come to”

Lawyer and activist Peter Stefanovic shared a video of what he said was the arrest of a 91-year-old man called John. Stefanovic called this “heartbreaking” and asked “Is this what it’s come to”?:

Is this what it’s come to. Arresting a 91 year old man with a walking stick who wants to save the planet for its children. This is heartbreaking to watch pic.twitter.com/gd24R3606O

A number of people agreed with Stefanovic:

Other people pointed to the fact that we’ve currently got a law-breaking prime minister in charge. Some also raised the behaviour of people who attend far-right demonstrations for comparison. 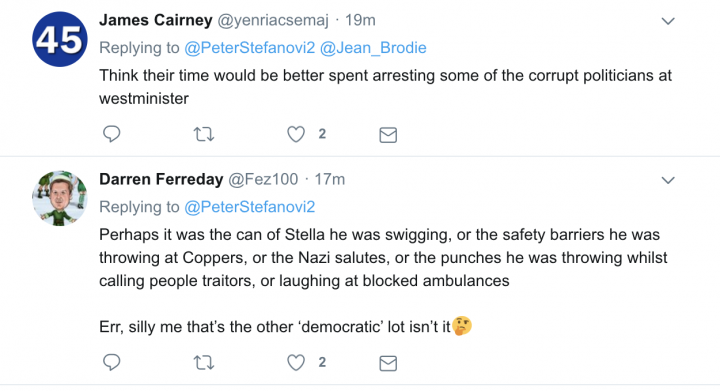 Hundreds of additional police have been called in “from every force in England and Wales” to deal with the Extinction Rebellion protests in London. Meanwhile, as the Labour Party has noted:

Under the Tories, 21,000 police officers have been axed and recorded crime is rising at the fastest rate in a decade.

Furthermore, the Network for Police Monitoring (Netpol) has accused some officers of not being up front with protesters about their legal rights:

Hearing police have been telling #ExtinctionRebellion protesters they will be "automatically" remanded if they are arrested for conspiracy to cause a public nuisance. This is simply untrue. Remand is possible but unlikely for a first offence pic.twitter.com/z4CzRnmuti

Those leading the way taking action on climate change are people like John and sixteen-year-old Greta Thunberg. Meanwhile, as Thunberg reminded us, those in power aren’t doing enough.

The Green Party’s Caroline Lucas also said that “everyone involved” in these protests:

believes the impact of the climate emergency, habitat destruction and ecological collapse make it essential that our policymakers sit up, listen and take action.

She stressed that a no-deal Brexit “being threatened by Boris Johnson and his extreme right-wing cronies” makes:

the work of rescuing our planet from this crisis even harder.

Given the huge amounts of arrests at the climate protests, it’s vital that everyone taking part is fully aware of their legal rights.

For example, as the Green and Black Cross ‘bust card’ explains:

Say “NO COMMENT” to all police questions during casual chats, ‘booking in’ or interviews, until you meet with a recommended solicitor…

At the police station you may wish to give your name, address, and date of birth to speed your release.

Do not accept a CAUTION without advice from a recommended solicitor. This is an admission of responsibility and goes on the police national computer.

You have the right to FREE LEGAL ADVICE at the police station.

NO DUTY SOLICITOR: Duty solicitors don’t always have experience with protest law, we recommend asking the police to contact [others with protest experience].

Netpol also stresses that it’s vital to know who the Police Liason Officers are:

If you're in London participating in the #ExtinctionRebellion protests, please remember the Police Liaison Officers in pale blue bibs are primarily in attendance to gather intelligence on your movement – despite what they may claim. See our full film here https://t.co/2d7YhTO71m pic.twitter.com/2GPAXVgljA

Stefanovic’s absolutely right, this is “heartbreaking”. And those challenging the establishment must know their rights at each and every step of the way.