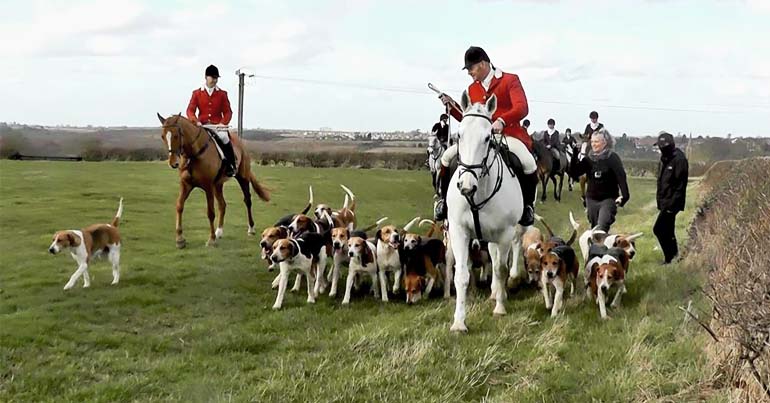 One of England’s most notorious hunts has just chosen to “cease hunting activities”. It comes after an aggressive six-year campaign of hunt saboteurs targeting the fox-hound pack. And it means that large swathes of the English countryside will be hunt-free for the first time since the 19th century.

For six years the Atherstone Hunt have been completely sabotaged and as a result they have now folded.

Consequently, it estimated that a “908 km² area of West Leicestershire and North Warwickshire are completely hunt free” as a result.

The hunt itself said it made the decision at a committee meeting on 7 October. A Facebook post explained that “hunting activities for the 2019/20 season” would stop “with immediate effect”. It further said that the future of the Atherstone Hunt will lie in “amalgamation” with another pack or the “sharing of kennels”. It provided no reason for the decision.

The Canary also contacted the Countryside Alliance for comment but had received no response at the time of publication.

West Midlands Hunt Saboteurs said that, during the past six years, its members had:

faced harassment, extreme provocation and regular violence from those associated with the Atherstone Hunt. We’ve received death threats, had our tyres slashed, cars burnt out and have been hospitalized.

The group also claimed it had experienced pro-hunt policing of its activities. Despite this, it “persevered and never backed down”.

The Canary has previously reported on the conflict between West Midlands Hunt Saboteurs and the Atherstone Hunt. In October 2017, audio leaked from an Atherstone Hunt meeting revealed that overwhelming criminal acts by its followers had left the hunt uninsured. These included a farmer riding a quad into a member of West Midland Hunt Saboteurs, one man slashing the tyre on the group’s vehicle, and two men throwing manure at anti-hunt protesters.

“You’ve just got to keep going”

Speaking to The Canary, a spokesperson for West Midlands Hunt Saboteurs claimed that serious problems within the Atherstone Hunt had been showing for some time:

They’d only been out three times this season. Then everything started to get cancelled and rumours were emerging that there was an issue – that the huntsman walked out. There were obviously clear issues.

And they explained that the group’s non-violent “persistence” took advantage of these problems:

We informed the public about what we did and we showed the public what they were doing as well. That just ground them down, I think, to the point where we started seeing numbers drop. Every season was a new huntsman and [whipper in]. They haven’t had a countryman [terrierman] for the last two years. Numbers were dropping. Hunt masters were dropping. Staff weren’t staying. Turnover was high. You could see they were feeling demoralised. That’s when [we] really kept going.

This is just one hunt among hundreds. But it’s a fantastic example of what small groups of people can achieve with faith and persistence. As West Midlands Hunt Saboteurs’ spokesperson told The Canary:

It shows what groups of dedicated people can do. We’re all volunteers, so it all comes from the heart and the belief that bloodsports and hunting is morally wrong. Whether it’s illegal or legal is irrelevant.

The Hunting Act has been ineffective at ending hunting. So the fact that hunt saboteurs are still out in the fields is something we should all be thankful for.