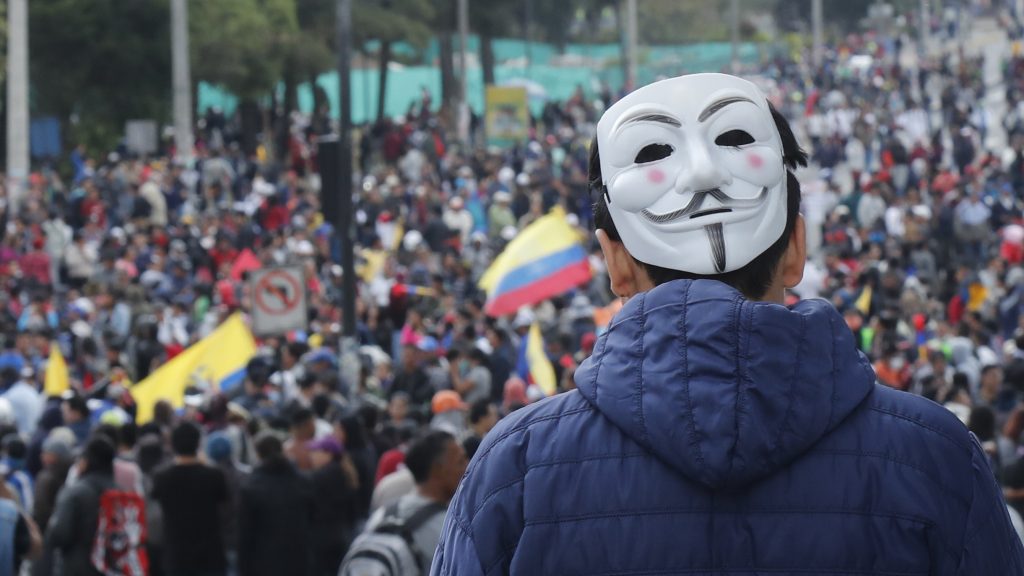 Thousands of anti-austerity protesters have converged on Ecuador’s capital Quito, forcing the country’s controversial president to flee the city.

The protests have persisted since last week, when President Lenín Moreno’s decision to end subsidies led to a sharp increase in fuel prices. They have spread from transport workers to students and then to indigenous demonstrators. And the government has now suspended some civil rights as part of its clampdown. A number of people have reportedly died, and authorities have arrested hundreds more.

From 2007 to 2017, many called Ecuador a “left-wing success story”. Indeed, the centre-left government significantly reduced poverty and inequality during its time in power, despite continued US interference. Since taking power in 2017, however, Lenín Moreno has moved further and further to the right, adopting the failed policies of austerity (while facing corruption allegations). This shift came in the context of a right-wing assault throughout Latin America.

Alfred de Zayas – a former UN independent expert on promoting global fairness and democracy who also worked at the Office of the UN High Commissioner for Human Rights – summarised the context as follows:

And as the protests in Ecuador intensified, he directed his attention specifically to the country’s current government, saying:

Poor people of #Ecuador. When I was on mission there in December 2017 as UN rapporteur I praised the government for its social programs. And today?

The Ecuadorian government is on a slippery slope toward fascism #Ecuador

He also referred to Naomi Klein’s concept of the ‘shock doctrine‘, which reflects on how right-wing elites have long exploited “disaster-shocked people and countries” to undertake “corporate reengineering” projects. And he said “Ecuador is the next victim”:

My report to the #UN General Assembly on the misdeeds of the #IMF expands on the analysis of Naomi Klein's "Shock Doctrine". Ecuador is the next victim #Ecuador

He also said the situation reminded him of the Caracazo (Venezuela’s biggest massacre in the 20th century, when right-wing state forces massacred protesters opposing austerity measures):

The excessive use of force in #Ecuador reminds us of right-wing dictatorships and the "Caracazo" in #Venezuela 1989, when President Carlos Perez unleashed the army against the people

According to teleSUR, Ecuador’s ‘Public Defender office’ has confirmed “that five people have been killed so far”, and some groups say the figure could be higher. At the same time:

Civil society groups are also reporting that over 800 are currently detained, including 13 journalists. Furthermore, at least 500 are reported injured.

Ecuador's progress is being undone thanks to the IMF. pic.twitter.com/qsndn6oO5z

Where’s all the mass media obsessing?

The Moreno government has declared an overnight curfew around key state installations and government buildings as well as vital infrastructure such as airports and oil refineries. The state of emergency, which it declared last week, allows it to curb some civil liberties.

Ecuador’s protesters have seized some oil installations, and state oil company Petroecuador warned that production losses could reach 165,000 barrels a day, or nearly one-third of total production, if insecurity continues. On Tuesday, meanwhile, protesters broke through police barriers and some entered the empty congress building in Quito. Police fired tear gas and forced them to retreat.

Such protests played a major role in the 2005 resignation of Ecuador’s president at the time, Lucio Gutiérrez. The country’s biggest indigenous group, the Confederation of Indigenous Nationalities of Ecuador, said Moreno’s government had failed to alleviate the suffering of Ecuador’s “most vulnerable” people, adding:

The group also resisted Moreno’s allegations that it was somehow a puppet of centre-left ex-president Rafael Correa:

CONAIE (Confederation of Indigenous Nationalities of Ecuador) draws a hard line distancing itself from former President Rafael Correa and top Citizens' Revolution leaders, saying they refuse to be taken advantage of.

"Our struggle is for the exit of the IMF from Ecuador." https://t.co/9RDOQo4ULH

The question now is, ‘given all the Western obsessing about protests against Venezuela’s centre-left government in recent years – and collaboration with the ongoing coup attempt in Venezuela, where is all the media obsessing about Ecuador now?’

#Ecuador | The only radio station that was letting the people talk about what they saw on the streets @pichinchauniver was shut down by government officials.#ParoNacionaleEC #EcuadorSOS #ParoNacionalEc pic.twitter.com/z5Sl3J4BUI