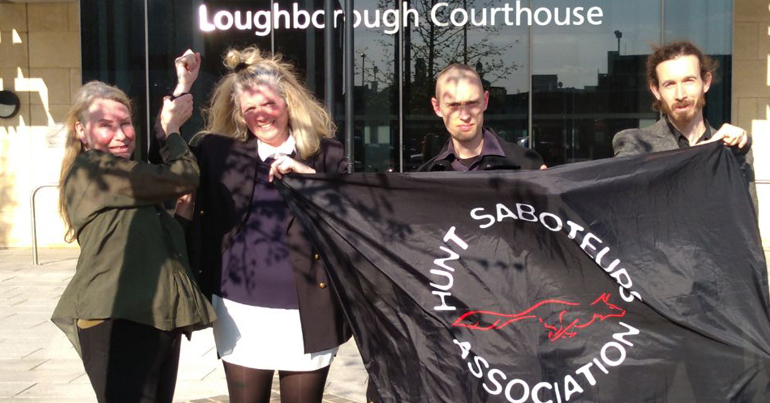 An anti-hunting activist was in court on 18 April for public order offences against members of the Atherstone Hunt. But the magistrate described the prosecution as not credible and dropped all charges. And it’s the latest in a long line of slip-ups by this notorious hunt.

Cathy Scott was on trial for three counts of causing harassment, alarm or distress during a demonstration outside the Atherstone Hunt’s kennels on 5 August 2017. The Hunt Saboteurs Association (HSA) says three senior members of the hunt gave statements claiming Scott had been “screaming, swearing and threatening them”. But the HSA says the video shown in the court:

disproved their allegations. The footage showed a very calm, quiet and low key demonstration outside the hunt’s kennels.

As a result, Scott walked away from the court room with a not guilty verdict. And the HSA press release goes on to say that:

When summing up the magistrates said the three hunt members were not credible and had changed their statements halfway through once they realised there was video footage.

The Canary approached the Countryside Alliance for comment on behalf of the Atherstone Hunt but it didn’t offer a response.

This isn’t the first time West Midlands Hunt Saboteurs have caught out the Atherstone Hunt. The Canary reported in October 2017 on audio secretly recorded by the saboteur group. It revealed legal costs were unaffordable due to the volume of abusive behaviour by supporters and members of the hunt.

During the same month, a farmer associated with the Atherstone Hunt made national news [paywall] after riding a quad bike into a member of the saboteur group. And also in October 2017, a hunt supporter was found guilty of slashing the tyres on the saboteur group’s van.

Previously, two men were caught throwing manure at the group during the Atherstone Hunt’s 2 January 2017 meet. And another supporter of the Atherstone Hunt was cautioned in November 2016, after colliding his car with the saboteur group’s vehicle and telling one member to “fuck off back to Coventry where you belong”.

In October 2016, the Atherstone Hunt was in the news after a rider with the hunt was filmed attacking a member of West Midlands Hunt Saboteurs. And a rider with the same hunt was found guilty of two counts of assault on a saboteur in December 2015. A hunt steward was also shown pretending to have sex with a dead goose in footage captured by West Midlands Hunt Saboteurs in September 2015.

resulted in over 20 convictions and cautions in the last 4 years. … I don’t think there is any other option left now apart from the hunts governing body the Master of Fox Hounds Association to disband the hunt completely.

– Donate to West Midlands Hunt Saboteurs to support its work against hunting and the badger cull.

– Read more about wildlife crime and hunting at The Canary.