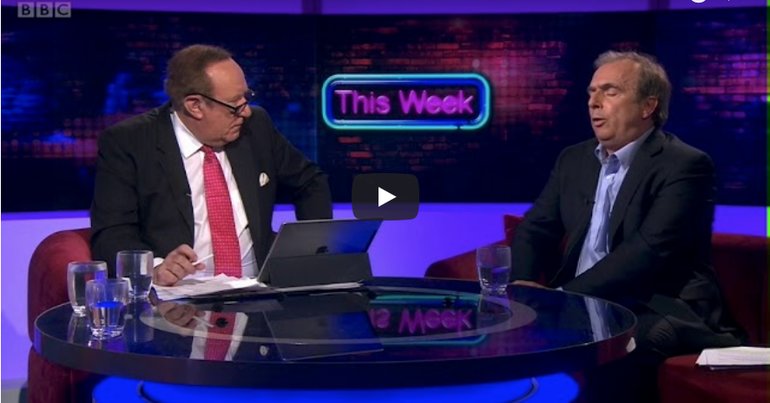 It’s not often a guest gets the better of BBC This Week host Andrew Neil. But viewers seem to agree that Peter Hitchens achieved that this week. During a segment on Syria, Hitchens took apart Neil’s arguments with clinical, rather than military, precision.

It’s not often that the left finds itself in agreement with Peter Hitchens. But support of his stance on Syria does not mean universal endorsement of Hitchens’ other opinions.

During his introduction to the segment, Neil asserts that many people have blamed Bashar al-Assad’s government for a chemical attack in Douma, Syria. And he says that US/UK/French airstrikes took out “chemical weapons facilities” in the country as a result. Both of these assertions are as yet unproven by international agencies outside of the foreign powers behind the airstrikes. Hitchens makes this point in his own introduction: that normally sceptical journalists and politicians become giddy jingoists over military interventions. As he puts it:

We all know the old cliché, that truth is the first casualty of war. But how often do we recognise that we are ourselves to blame for this?

In normal times, wise people doubt the words of governments and suspect propaganda. But when the jet engines begin to roar, they believe atrocity stories. They demand that we must go out and bomb somebody.

Hitchens concludes that, after reading the reports of the Organisation for the Prohibition of Chemical Weapons (OPCW), he is still waiting for a justification for military action.

On the This Week sofa, former Labour home secretary Alan Johnson and disgraced former Conservative frontbencher Priti Patel recycled pro-war soundbites. Hitchens asks if either of them can name the Syrian rebels in Douma at the time of the attacks.

Patel confesses she can’t, while Johnson attempts (quite embarrassingly) to repeat their name as Hitchens reveals it. The answer is Jaish al-Islam (The Army of Islam), a fundamentalist group that aims to replace the Assad regime with Sharia Law. Their methods of warfare include putting opponents and their families in 100 cages in 2015, and alleged responsibility for a chemical weapons attack in 2016. Hitchens rightly asserts that Patel and Johnson shouldn’t speak with such conviction without knowing these basic details.

Finally, Neil attempts to dismiss Hitchens as a conspiracy crank. He misquotes his Mail on Sunday blog to argue that Hitchens speculated the West faked the attack. Those who viewed the blog know this is untrue. Hitchens argued that non-government forces in Syria had an incentive to falsely implicate Assad in chemical attacks, to drive Western intervention. While Hitchens points out Neil’s error, attributing it to BBC This Week researchers, Neil does not correct himself. He makes several personally derisive remarks to Hitchens and closes the segment.

But viewers and Hitchens were not about to let that stand. People from the left and right took Neil and the BBC to task for misrepresenting Hitchens’s views and writings on Syria:

Peter Hitchens was right and Andrew Neil was, unusually, wrong. He was clearly referring to the Syrian rebels. https://t.co/ZnKBlvPTCQ pic.twitter.com/SDN989c0Si

@bbcthisweek Im no fan of @ClarkeMicah but @afneil clearly didnt read the blog. It's quite clear that Hitchens is talking about rebel forces faking future attacks, and not US, UK and France. pic.twitter.com/xHhXraqp1F

On #bbctw @afneil quoted Peter Hitchens' blog & said "You've speculated that Western countries can fake such attacks [in Syria].” @ClarkeMicah denied this, saying he was writing about jihadis being tempted to fake attacks. Reading the full text Hitchens was right, Neil was wrong. pic.twitter.com/R0rbtCeiEh

A bad night for Brillo.

CORRECTION: This article was updated on 23 April at 14:57 to clarify that Neil was reporting the words of others when suggesting Assad was responsible for the attack.