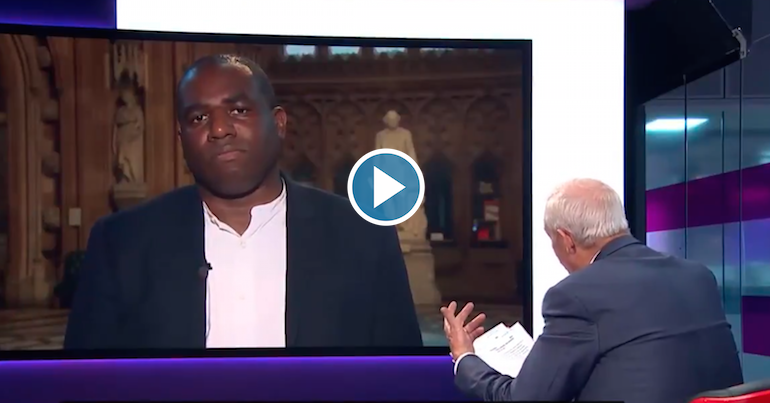 Labour’s David Lammy has lambasted the Conservative government’s response to the Windrush scandal.

On 19 April, the MP told Channel 4 News that ministers had lost control and needed to resign:

I’ve been a member of parliament now for 18 years, and I’ve seen, over the years, certainly when Labour were in power, home secretaries go, immigration ministers go. And they went when there was a sense that they’d lost control of their officials, or something they said wasn’t quite correct, and they fell on their sword, and a new person came in to run things.

For all of those reasons, we need a review, and we do need new personnel.

When Labour were in governmentt Home Office ministers resigned when they lost control. We need a change of leadership. We need a review of Theresa May's hostile environment policy. Do we really want to send a message out to the wold that Britain is cruel, inhumane and hostile? pic.twitter.com/2sOZDCSEO9

Lammy had previously shared a video clip of May speaking on BBC Question Time back in 2004:

In 2004 Theresa May said "I find it extraordinary that a Minister isn’t willing just to step up to the plate and take responsibility… I’m actually sick and tired of Government Ministers who simply blame other people when something goes wrong".

Lammy’s comments follow a failure to take responsibility for the Windrush scandal by home secretary Amber Rudd and prime minister Theresa May.

Rudd apologised after Lammy’s urgent question to the home secretary on Monday 16 April:

My parents came here as citizens, now the #windrush generation are suffering inhumane treatment at the hands of the Home Office.

If you lay down with dogs, you get fleas!

This is a day of national shame: the PM and Home Sec must apologise! pic.twitter.com/gxqoSErU3o

But she blamed Home Office officials for any errors.

During trade talks with Caribbean heads of government, May apologised for any “immigration anxieties” the Home Office might have caused. Again, she shifted blame from ministers onto nameless officials.

After The Guardian revealed on 17 April that the Home Office destroyed Windrush landing records in 2010, Downing Street said the UK Border Agency (UKBA) had made that decision. May was home secretary in 2010.

Yet, in Prime Minister’s Questions (PMQs) on 18 April, May astounded everyone by declaring that the previous Labour government was to blame. “The decision was taken in 2009, under a Labour government,” she said:

“Did the PM, the then home secretary, sign off that decision?” @jeremycorbyn asks about landing cards for Windrush immigrants

“The decision to destroy the landing cards was taken in 2009 under a Labour government” @theresa_may#pmqs pic.twitter.com/5k73AkNitG

On the same day, Labour MP Dawn Butler announced in parliament that she had confirmed that both the decision to destroy the landing cards and their destruction was done by the UKBA in 2010:

Dawn Butler: During PMQs the PM said the decision to destroy the #Windrush landing cards was taken in 2009… I've had it confirmed that the home office briefed yesterday that this decision was taken by the UK Border Agency in 2010#PMQs #heatwave pic.twitter.com/QdhLPEAgB5

Forced into a corner, Downing Street released a statement that the landing cards were destroyed in 2010 by UKBA as an “operational decision” and May (home secretary at the time) did not know about it.

Not knowing about it and not being responsible for it seems to be the prime minister’s final word.

Neither the Home Office nor the prime minister have yet said what they’re going to do to put things right. What of the people threatened with deportation? What of the ruined lives?

The ‘hostile environment’ policy needs reviewing and abolishing. And every one of the descendants of the Windrush generation caught up in its wake needs more than an apology. They deserve action. They deserve a government that is willing to take responsibility and do something about the injustices that the Home Office has committed. And on 3 May, we all have a chance to show the government what we think.