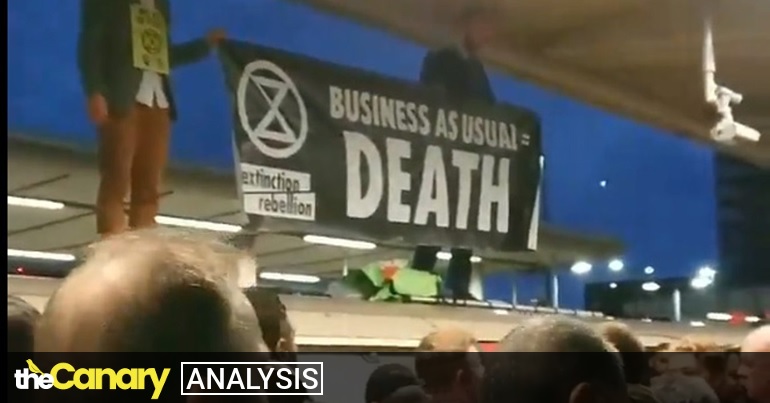 During the Thursday morning rush hour, Extinction Rebellion (XR) scored a massive “own goal”, according to critics. Because by targeting a Tube train in east London with a protest, an XR activist revealed an apparent disconnect between the movement and ordinary working-class communities. And the situation soon turned ugly as a result.

The global climate crisis is a massively important issue, and requires urgent action. Business as usual is most certainly not an option. But XR’s protest tactic on Thursday was a big misstep that only did harm to the cause.

After climbing on top of a train at the busy Canning Town station, an activist had drinks thrown at him by furious commuters, before being yanked from the train to the platform floor, much to the apparent delight of the cheering crowd.

One man yelled “I need to get to work, I have to feed my kids”, while others shouted insults at activists. Critics were also out in force on Twitter, angry that the “most sustainable form of travel possible” had been targeted. They also said the action had ‘alienated’ working-class people, and that activists should focus their efforts “on politicians & the top of big corporations & banks” (i.e. “those who create the problem” of climate breakdown):

The Tube & all modes of public transport are part of the solution to climate change, not the problem.

Can we kindly suggest you stick to protesting against those who create the problem. Not our industry, members + hard working commuters.

#extinctionrebellion protesters got it so wrong this morning:

Wish they would keep the focus on politicians & the top of big corporations & banks.

I'm really sad about this. I didn't want #ExtinctionRebellion to do this, such an own goal. I hope these protesters are ok. Please don't do this again. You are alienating working class people using public transport. Focus on politicians and big finance. https://t.co/c0Wn9fdHq9

1. Change your tactics, we support the cause.

3. Focus on the fossil fuel capitalist class and how to disrupt them

4. Solidarity against the London-wide ban on protest

Others highlighted that, for meaningful change to happen, activists very much “need” working-class people’s backing:

In an era of populism effective political action needs an enemy. The enemy is not working class Londoners who use the most sustainable form of travel possible.

This is why green politics without organised labour will not win. pic.twitter.com/VImuZ91vRL

I am all for @ExtinctionR ‘s cause but this is counter productive. Public transport is key in tackling climate change. Pissing off the working class is not going to help your cause. You need them. Stop this. Protest but do it peacefully and proactively.

A wrong turn for an important movement

Since last week, XR protesters have targeted London City Airport, shut down areas around parliament and the Bank of England, and blockaded Google’s HQ. But many posts on the XR London Facebook page expressed concerns that the Tube stunt was counterproductive and should not have gone ahead.

XR spokesperson Howard Rees told the PA news agency: “Was it the right thing to do? I am not sure. … I think we need to take stock of it.”

The action is the latest in a series from XR, which police have controversially banned from protesting in London. A legal bid to overturn the order is expected to reach the High Court on Thursday afternoon.

British Transport Police confirmed eight people had been arrested on suspicion of obstructing the railway on Thursday, and also urged commuters not to “take matters into their own hands”.

From bad to worse…

That wasn’t the end of the controversy, though. Because XR then apparently compared the Tube protesters to civil rights activist Rosa Parks. In a now-deleted tweet, the official XR Twitter account wrote: “Rosa Parks refused to move from the white section of the bus and our rebels refused to bequeath a dying planet to future generations by failing to #ActNow. Our #InternationalRebellion against the complicity of our governments in the climate and ecological emergency continues.”

Rosa Parks was an African-American activist in Montgomery in the US. She was arrested in 1955 for refusing to give up her seat to a white passenger after boarding a segregated bus.

Did they just compare themselves to Rosa Parks… Who had PLANNED this action and had a community behind her to support the boycott to limit the damage done to the most affected? Unlike XR? The caucasity. pic.twitter.com/CtkUcXM4pz

Rosa Parks was part of a sophisticated network of black activists who built inclusive strategies for resistance to build *with* people, not against them, not speaking over them. Maybe learn from them? Your leaders are open about their choices + they *are* choices to be ignorant

Others have criticised the comparison for being made during Black History Month.

Environmental breakdown is a class issue which requires working class solutions. The Labour movement has voted to take leadership on the climate emergency with a response which puts people and planet before profit.

For too long, big businesses and corporate polluters have allowed our planet to burn… Only a comprehensive programme of government and worker-led action can bring us out of this climate emergency…

we need democratic public ownership of not just the national grid, but the big energy companies too…

working class people are the crucial agents to tackle climate change. This is a pro-worker agenda – for working class communities and for workers’ jobs…

Unlike XR’s “own goal”, Labour seems to recognise that the climate justice movement needs working-class communities and organisations on its side – and in a leading role.

Because elitist ‘solutions’ have done so little to deal with the climate crisis, revolutionary change for working communities is essential. And that most certainly does not mean targeting the green public transport these communities rely on.