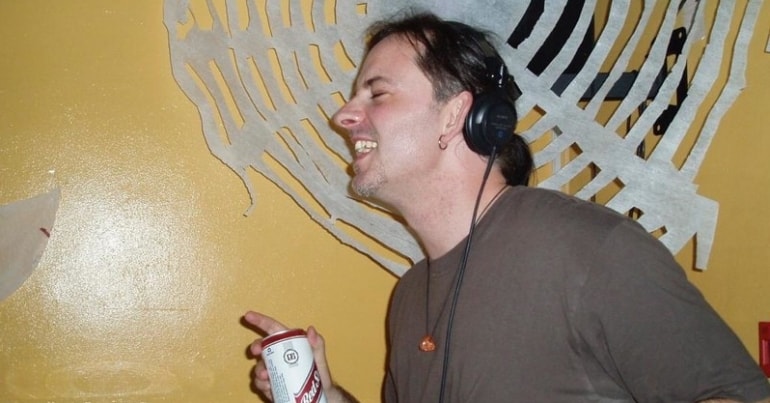 The Undercover Research Group has revealed a detailed profile of one of the UK’s political policing officers, exposing the shocking breadth of his intrusion into the lives of political activists in the UK.

The Undercover Research Group’s profile of Harrison, known as HN18 by the Undercover Policing Inquiry (UCPI), is “one of their largest” to date. Harrison, who worked with notorious Special Demonstration Squad (SDS) between 2004 – 2007, infiltrated pro-Palestine groups like the London branch of the International Solidarity Movement (ISM). He then progressed to anarchist groups such as the State of Emergency Collective and London No Borders.

Asa Winstanley, an investigative journalist with the Electronic Intifada, knew Harrison from his days as an activist with the ISM.

Asa Winstanley: The man I knew as Rob Harrison was “a friend and a comrade”

“I wouldn’t consider him a best friend, but certainly a friend and a comrade”, Winstanley told The Canary. He explained that they used to go out drinking together:

I was more of an activist in those days, than a writer. I was involved [with the] International Solidarity Movement. The ISM provided training for activists for their work on Palestinian human rights and on how to keep themselves safe with basic security precautions.

Winstanley recalled the fact that Harrison didn’t seem to take security precautions as seriously as others at ISM. One example was when Harrison offered to drive Winstanley to the airport when he was flying to Palestine/Israel. “The idea, and what people always said in training was: ‘if you want to go to Palestine don’t tell us, just go'”, Winstanley said. The ISM was fairly security conscious, he explained, “almost at the level of being paranoid – though now we can see that was justified”.

Winstanley didn’t discover that the man he knew as Rob Harrison was actually a spycop until the Undercover Policing Inquiry (UCPI) released his cover name in December 2018.

Over 1,000 groups spied upon, infiltrated, and sabotaged

The UCPI was set-up in 2015 following numerous scandals involving police surveillance. In addition to using the names of dead children for their cover identities, spycops also went as far as deceiving women into romantic and sexual relationships, even fathering children, and spying on families of people who had died at the hands of the police.

Police officers infiltrated over 1,000 organisations and movements across the UK although the UCPI is refusing to hear evidence about events that took place in Scotland and Ireland.

At least 118 undercover police officers were deployed against a wide range of protest and social justice groups from 1968 – 2008 alone when the SDS shut down.

Numbers of officers have not been released for its successor – the National Public Order Intelligence Unit (NPOIU) which closed in 2011.

And while the SDS and the NPOIU no longer exist, it seems clear that political policing continues to this day with the National Domestic Extremism and Disorder Intelligence Unit.

Harrison was the “perfect wallflower”

Winstanley explained that the profile of Harrison as a “wallflower” is “accurate”:

He was a friendly guy, always willing to help.

The Undercover Research Group describes Harrison as, “a man with a car who, despite a lack of real politics, uses his friendliness and helpfulness to place himself at the heart of the groups he was targeting”.

Though his reputation varied with some describing him as “flirtatious in a creepy way” and a “‘nervous loser“.

A woman known as Maya was deceived by Harrison into a relationship. According to the Morning Star, Maya had an “intimate sexual relationship” with Harrison. She is now demanding the right to know Harrison’s real name. The UCPI has agreed that Maya, “is entitled to know his real name”, and that she can, “make such use as she thinks right of personal information which she is entitled to”.

This decision was, however, criticised by campaigners due to the pressure of the decision over whether to publish this information being left to Maya:

The Inquiry is upholding its first Chair's promise to tell women deceived into relationships by #spycops the real names of officers. However, it betrays the spirit of the promise by *only* telling Maya now, making it her responsibility whether to publish rather than the Inquiry's

It’s not unusual for people to drop in and out of activist circles, Winstanley explained, as people’s priorities change, family obligations arise, or campaign focuses shift:

So, it wouldn’t necessarily be suspicious that he was no longer involved. But he did appear to just disappear with no kind of explanation.

“I am still coming to terms with it”, Winstanley said, but “it is actually quite hard to write about”. When he published his first piece on Harrison in December 2018, he recalls his editor saying he would have preferred a more personal article.

But I couldn’t deal with it on that level. I did them in a hard news way. That was the only way I could do it.

It’s difficult, because on one hand, on an intellectual level, it’s not surprising. But I can’t say that at the time [I suspected him], I don’t think I ever thought he’s definitely a spy, like some of my comrades did. [Harrison] won me over, so he definitely fooled me.

“It is a betrayal. There’s no doubt about it”.

Winstanley wasn’t denied entry into Palestine by Israeli authorities until 2009 (two years after Harrison’s deployment finished), but other members of the ISM were, he recalls.

And he said there are still a lot of unanswered questions that they want the UCPI to reveal the truth about:

The lawyers are pushing to find out what was he doing, why were we targeted, what was he saying about us in his reports. Its highly likely I told him personal stuff, but I can [only guess] what is in his reports that he sent back to his superiors. What a lot of us want to know is whether any of that info was making its way back to Israel. Because we know that SDS worked with the Israelis and exchanged intelligence.

Winstanley said he is still working through the realisation that someone he considered to be a friend and comrade in the fight against injustice was actually a liar and a spy working for the police.

“It is a betrayal. There’s no doubt about it”, he said.

Featured image via the Electronic Intifada