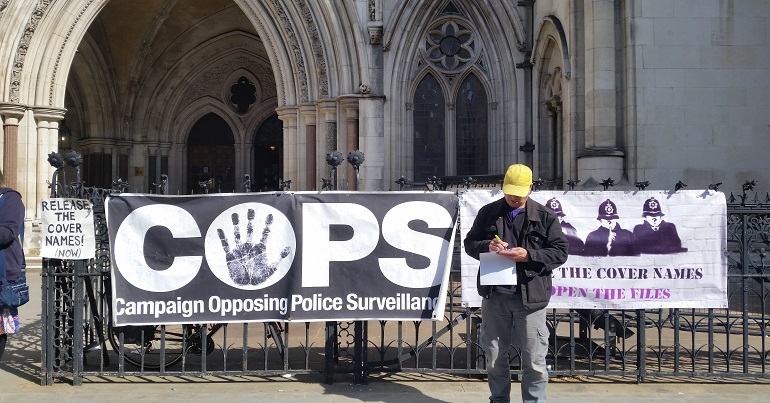 During the latest hearing of the Undercover Policing Inquiry (UCPI) held on 18 May 2018, a lawyer representing the Metropolitan Police Service (MPS) asked [pdf, p13] the inquiry judge whether undercover officers on “current undercover deployments” would be at risk of giving evidence in public. Essentially, that appears to be a disclosure suggesting that political police are still active in Britain today.

The author of this article, Mohamed Elmaazi, was present for half of the hearing. The Canary’s Emily Apple, who is a core participant, also attended the proceedings.

Judge Mitting – who replaced the former Court of Appeal judge, Sir Christopher Pitchford, who stepped down due to ill health – has spent much of the last decade overseeing proceedings in a secret court likened to the Star Chamber (a Renaissance-era court which became synonymous with “arbitrary, secretive proceedings”) before he was appointed as the latest UCPI judge.

Mitting assured the representatives of the British state that there was no chance that officers currently under deployment would give evidence in public.

Judging by Mitting’s record, this decision is hardly surprising in and of itself. Yet it does suggest that both Mitting and the lawyers for the state are aware that political organisations and social movements are still being infiltrated or otherwise spied upon by British political police, commonly known as ‘spycops’.

In January 2016, Assistant Commissioner to the Metropolitan Police Martin Hewitt claimed that the MPS “no longer carries out long-term infiltration deployments” on protests groups.

Emily Apple tweeted about the significance of this:

Not that it’s a surprise. All hearings about present undercovers will be held in closed sessions so we’ll have no way of holding any present deployments to account #spycops

Much of the discussion at the hearing – in which non-state participants were merely meant to be observers – centred around technical problems such as the software used by the MPS and the UCPI to view, share and redact documents.

Kevin Blowe of the Network for Police Monitoring (Netpol) told The Canary:

There has not been one piece of evidence heard yet by any of us. We are three years in – these issues should have been resolved by now.

The state appeared to be, through its legal representatives, seeking to do everything conceivable to delay or redact or reduce the level of information that might be made public and to the victims of what have been clear human rights abuses on the part of the police. This included the request that UCPI lawyers should be physically present inside MPS buildings to examine documents where decisions on redaction could be made. As Netpol intimated, this could be interpreted as an attempt to give the state a further tool to influence UCPI lawyers to agree to redactions.

Lawyer for Metropolitan Police at #spycops inquiry is arguing that when redacting documents, they want the inquiry staff to undertake this on police premises – which would mean its officers hovering over them as they work.

What could possibly go wrong, eh?

A silver lining from the boycott of anonymity hearings?

The hearing began with Mitting reading out a statement, in which he referred to the walkout by non-state core participants during the last hearing. He then appeared to concede that there would be benefits to having private consultations with only non-state core participants. This is something both he and Judge Pitchford previously refused to do, citing the need to appear “impartial” and “independent”.

In March, campaigners and victims of political policing staged a walkout in frustration at Mitting’s insistence on protecting the identity of spycops. However, Helen Steel, who was representing herself at today’s hearing, made clear to the judge that non-state core participants wanted to participated but that:

the position is we feel we can’t meaningfully participate because we don’t have enough information disclosed to us. I would just like to make that clear.

Mitting said he spoke on 17 May to Sukhdev Reel, the mother of a young student killed by racist attackers in 1997, and that he learned a lot from his interactions with her.

On 17 May, Reel (whose justice campaign was spied upon by at least one spycop, David Hagan – known as HN81) reportedly told the BBC:

I can’t sleep at night… I need to know who these police officers were, who were following me, their names, & I’m not even asking for cover names, I want their proper names as well

Carolyn, one of the non-state core participants at the hearing, told The Canary:

I hope the meeting that Mitting had with Sukhdev has increased his understanding of what the experience has been so far for victims of political police. He has seen for himself the trauma this caused her, the sleepless nights… and it’s the same for all of us. Without the disclosure we have been asking for, are we going to be stuck for another six years without finding the truth?

Mitting layed three general categories of documents: documents that would be “completely closed” to the public, documents that were historic in nature and so therefore required little to no redaction, and those that may be more recent but would require little to no redaction. The idea that there may be documents which would avoid redaction because they were historic in nature, however, clearly irked the state’s representative.

Interesting that Judge Mitting has indicated documents even on fairly recently #spycops deployments – including David Hagan who spied on the Movement for Justice and the Lawrence family – may require little or no redaction. Unsurprisingly, the police are rather less keen…

Steel, an environmental and social justice campaigner who is among a number of women deceived into having a long-term relationship with an undercover officer, told The Canary:

It’s good that [Mitting] recognises that historical documents should be completely [unredacted], but that must be extended to much more recent documents as well. I would say at least to five years ago. What likelihood is there that there are any ongoing legitimate investigations that would require documents from five years ago to be redacted? Those who have been spied upon must be able to see the documents in order to know how to respond and what to say to the inquiry.

The apparent revelation that there could still be political spycops ‘currently on deployment’, meanwhile, is very worrying. And that’s all the more reason to ensure the utmost transparency regarding this inquiry.