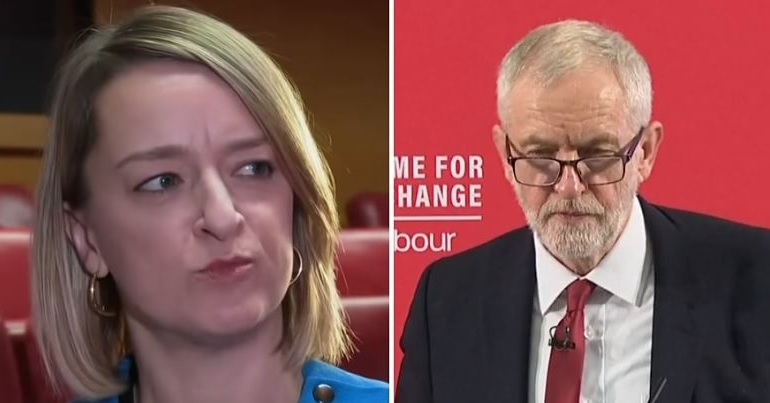 Jeremy Corbyn dropped a bombshell and a half on 27 November. The Labour leader exposed over 400 pages of documents detailing secret talks between US and UK officials in relation to a post-Brexit trade deal with the country.

The documents should be career-ending for Boris Johnson. According to Corbyn, they show that officials are at an “advanced stage” of negotiating a steep increase in drug prices for the NHS, that access for US corporations to run services in the NHS is under discussion, that talks have included discussion of a “system that gives corporations the power to sue our country”, and that the US is offering to share its propaganda with the UK government to trick the media and country into lowering food standards.

In light of all that, BBC political editor Laura Kuenssberg’s reaction is absolutely appalling.

Corbyn exposed the previously secret documents in a dramatic challenge to Johnson. The PM has previously described the idea that the NHS will be up for grabs in a US trade deal as “an absolute invention”.

In the announcement, Corbyn said:

We’ve now got evidence that, under Boris Johnson, the NHS is on the table and will be up for sale. He tried to cover it up, his secret agenda, but today it’s been exposed. Now we know the truth, when Johnson says “get Brexit done”, it’s a fraud on the British people. This is the reality, years of bogged down negotiations and our NHS is up for sale. This election is now a fight for the survival of our national health service, as a public service free for all at the point of need.

Labour will never ever treat our NHS as a bargaining chip in trade talks with anybody. We will never let Donald Trump get his hands on our NHS.

Corbyn then went onto explain exactly how “our NHS is up for sale” under the Conservative government. Kuenssberg posted a series of tweets in response, starting with the following:

This is all going to be furiously disputed through the day, no question ..trying to get link to the full documents so you can have a proper look – important tho Corbyn doesn't provide evidence that ministers have agreed that health service shoudl be part of a trade deal with US

The BBC political editor is right that journalists should have a “proper look” at the documents. In fact, Corbyn encourages them to do so. What’s absolutely flooring about her response, however, is that she says the Labour leader doesn’t “provide evidence” ministers have agreed with the plans. Because the UK officials involved in the talks are working at the behest of the UK government, i.e. the ministers.

Here’s what Corbyn says the officials, working on behalf of the UK government, have been doing:

These reports cover six rounds of talks, running from July 2017 until just a few months ago. The meetings took place in both Washington DC and London… We’re talking here about secret talks for a deal with Donald Trump after Brexit… A deal that will shape our country’s future. These reports pull back on the curtain of the secrecy that’s been plotted for all of us behind closed doors by this Conservative government.

Specifically on medicine pricing, Corbyn says the “negotiations have advanced even further than we feared”. He explained:

The US and the UK have already finished initial discussion on lengthening patents for medicines. Longer patents can mean only one thing. More expensive drugs. Lives will be put at risk as a result of this. Many out-of-patent medicines available cheaply here are vastly more expensive under patent law in the United States. The drug, Humira, for crohn’s disease and rheumatoid arthritis, costs our national health service £1,409 a packet. In the United States the same packet costs £8,115.

Quoting from the documents, Corbyn says UK officials reported that patent issues around “NHS access to generic drugs will be a key consideration in talks”. The documents say officials are ready to “exchange text” on drug patents, which the Labour leader describes as “trade negotiator speak for it being at a very advanced stage”. Officials say they’re ready to “really take significant further steps” Corbyn claims, adding:

Big pharma has ripped off and imperiled the health of the American people for years. Now these secret reports show they’re looking to do the same to us, if the Conservatives are elected on December 12.

The Labour leader said that NHS services are also on the table in the talks:

The new breed of trade deals are not only or even mainly about tariffs on goods at the border. They’re also about services, including our health service. And these documents make clear… everything is included unless something is specifically excluded. They want, I quote, “total market access” as the baseline assumption of the trade negotiations.

And the documents, according to Corbyn, show that the UK government has promised to be a “liberalising” influence. Liberalisation means relaxing laws and rules to remove restrictions to, in this case, trade. Corbyn said:

On behalf of the Conservative government, officials reassured their counterparts that the US should expect the UK to be a liberalising influence and that together they could fly the good flag for services liberalisation. That’s a green light for breaking open Britain’s public services so corporations can profit from them.

So now we know, direct from the secret reports that they never wanted you to see. The US is demanding that our NHS is on the table in negotiations for a toxic deal. It’s already been talked about in secret. That could lead to runaway privatisation of our health service. Mega corporations see Johnson’s alliance with Trump as a chance to make billions from the illness and sickness of people in this country.

The Labour leader also argued that, once implemented, such changes would be “almost irreversible” because “officials have discussed the system that gives corporations the power to sue our country”. He concluded:

Everything is on the table

Kuenssberg also had something else interesting to say about the NHS revelations:

But despite the BBC political editor’s suggestion that all this will ‘motivate’ only Labour voters, it affects everyone who depends on the NHS. So although she effectively relegated worries about these revelations to people who support Labour, they are a concern for the majority of the country – and should ‘motivate’ all voters in this election.

Also of concern to everyone is the fact that Corbyn says the NHS isn’t the only aspect of British life under discussion in the talks. Food safety, gender discrimination rules and workers’ rights are among the things discussed. On food safety in particular, such as chlorine-washed chicken, Corbyn says the documents show the US has even offered “to share its public lines to help our government with its media narratives”. Meanwhile, Corbyn says Trump “refuses to mention climate change in the deal”.

All these revelations should be a cause of great concern to everyone. Because, despite what Kuenssberg says, it’s the Conservative government that’s leading on this negotiation. And if people elect the Conservatives to government again on 12 December, this vision of horror show Britain could be exactly what we get.