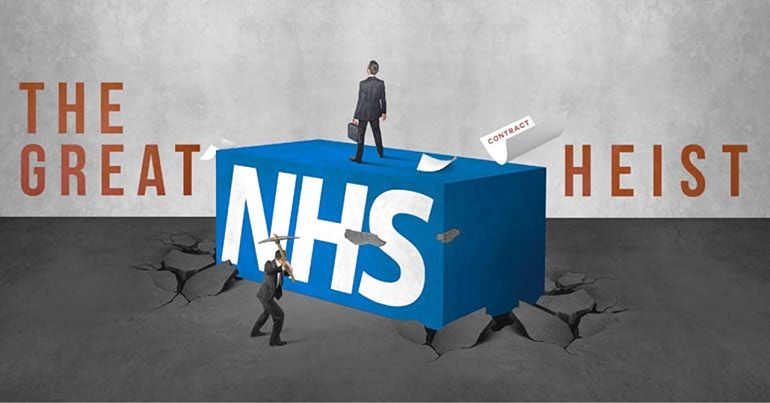 Powerful, new documentary The Great NHS Heist reveals how the NHS has already been outsourced, privatised, and undermined, by stealth, over the last four decades.

Directed and filmed by videographer Drew McFadyen  and produced by GP and activist Dr Bob Gill, this independent film takes aim at the complicity of successive governments since the 1980s in undermining what was once the crown jewel of British social democracy.

Until a Labour government set-up the universal, not-for-profit healthcare service in 1948, it was normal for people to die for lack of basic healthcare, the film explains.

Danny Dorling, professor of geography at Oxford, says: “the most telling thing is the absolute collapse of the suicide rate of elderly people in the years before the NHS began”. Dorling explains that “you no longer had to kill yourself, so you were not a burden on your children. Because you knew [the NHS] was coming”. Labour’s introduction of a universal healthcare system free at the point of service was life-changing for millions of people.

Neoliberalism and the introduction of ‘market’ ideology into the NHS

While opposition to the NHS goes back to the 1940s, especially from the Conservative Party, the film focuses on policy changes which began in the 1980s.

Gill explains how, in 1983, Sir Roy Griffiths, a co-chair of Sainsbury’s supermarkets, worked with the Tory government of Margaret Thatcher on restructuring the NHS.

produced a report for the Thatcher government outlining a new corporate managerialism for the NHS. Now what this did was to re-purpose the NHS, change the public service ethos into that of a business, and this was a major important step in the privatisation [agenda]. He also then went on to serve on the NHS management board and remained an adviser to the government for a further ten years.

Gill told The Canary that for the first thirty years hospital boards were “dominated by doctors and nurses who practised [medicine] at the hospital”, who had a “direct interest in ensuring patients do well”. These boards ensured “clinical oversight on every aspect of the hospital”, but after the Griffiths report hospital boards became “corporatised”. Doctors and nurses were first disempowered and then removed altogether, he said. Now hospital managers are “completely divorced from the impact of decisions they make”, Gill explained.

Seven years after the Griffiths report, the Tories passed the National Health Service and Community Care Act 1990, which introduced an “internal market” into the NHS. Gill said that hospitals which were completely debt-free for the first 30 years of the NHS started to see these charges coming out of their budget. The ‘internal market’ also meant that instead of the NHS operating as a “unified system with everyone working on getting the patient well”, a system of “buyers and sellers” was created, Gill explained. Hospitals became “providers” of healthcare and GPs became “purchasers”.

Now GPs who “haven’t got a clue about purchasing were making decisions on where to purchase services from”, Gill said. “What it did was start to pervert relationships within the NHS and… break down cohesion and camaraderie [by creating] winners and losers”.

New Labour’s former health secretary Frank Dobson explains that “before the internal market was first introduced by Kenneth Clarke, the NHS was brilliantly efficient”. The NHS “spent just 4%… on administration, and it now spends somewhere between 12% and 15%… That’s more than ten billion pounds a year extra going on running the contracting system, money utterly down the drain”, Dobson said.

After the Thatcher government set the stage with its market-orientated policy changes, it was still necessary to put these Tory plans “in the hands of a business friendly opposition party”, as health policy expert Lucy Reynolds says.

David Graeber, an author and anthropologist, sets the stage by describing how, over the 1970s and 1980s, social democratic and “mainstream left” political parties in Germany, the UK, and the US “ditched the unions”. “They ditched their working class constituencies, and they made a self-conscious decision to become the parties of the professional managerial classes”.

Perhaps the most infamous example of this shift is how New Labour, under the leadership of Tony Blair and Gordon Brown, introduced Private Finance Initiatives (PFIs) as a means to finance the building and operating of new hospitals.

PFIs locked hospitals into paying outsourced, for-profit providers for services like catering or cleaning. Worse yet, the hospitals were also obliged to pay[pdf, p8 -22] the PFI creditors (a consortium of financial interests) what is effectively a lease for up to thirty years. These mean hospitals inevitably start haemorrhaging money while accountability for the quality of many services in the hospitals is outsourced to for-profit businesses. On top of that, by the end of the PFI contract, the hospital still doesn’t own the land. It remains in the hands of the consortium.

Hospitals built via PFI had “up to one third fewer beds” Gill told The Canary. The result being that the UK now has one of the lowest bed to population ratios in all of Europe. Gill called the whole process a “scam”.

Dobson says that PFIs were “never a particularly good idea”. But they were “the only way” he was “going to get hospitals built”, because the Treasury would no longer pay for them.

The 2012 Health and Social Care Act, by the Tory-Liberal Democrat coalition government, represents the next major attack on the NHS. Gill summarised the key results of the 2012 act for The Canary this way:

A key part of the “Heist” is the misdirection perpetrated by those who “talk about immigration again, and again, and again” says Dorling. They talk about “how everything would be fine if you could cut immigrants to tens of thousands. Everything to dissuade people from looking at what the real problem is”.

There is so much more in the film than can be described in a single article. The best way to find out is to watch it.

Gill and McFadyen say they have published a free-to-view version of this film online because they want as many people as possible to watch and share it before the general election so that they can make an informed decision. “Your health and that of your loved ones may very well depend on it”, they said.

The film was financed by Gill and via donations from the public. People can watch The Great NHS Heist on YouTube for free until 12 December, and then they can rent or buy it thereafter via Vimeo.