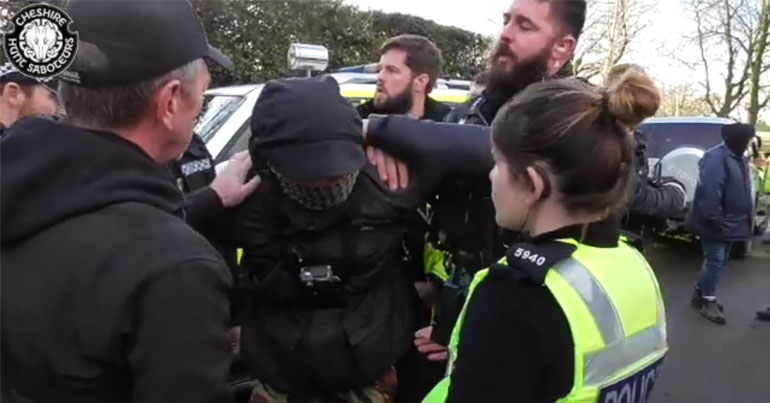 On 4 January, Cheshire Police arrested eight hunt saboteurs on suspicion of assault and possession of an offensive weapon. But one of those arrested told The Canary that media reporting of the incident spun what actually happened on the day “out of proportion”.

Police have just arrested a car full of monitors and a sab due to the hunt making an 'allegation'. The hunt pursued a fox infront of the police whilst making arrests to which they responded 'were busy'. The police brought 14 vehicles to make arrests. pic.twitter.com/o2rj98eYey

Cheshire Police confirmed to the Telegraph that it had arrested seven men “on suspicion of assault and possession of an offensive weapon in a public place”. It also arrested an eighth man on suspicion of a public order offence.

The following day, Cheshire Against Blood Sports posted a video showing hounds in cry, following a scent, within sight of the arrest. The group said that huntsman Jake Oppenheim arrived at the location “A full five minutes later”, describing him as “clearly not in control of the hounds”.

On 7 January, the Telegraph reported that there were “angry confrontations” between Stockport Monitors and hunt supporters and that an “offensive weapon” was found inside the group’s car. It also quoted a spokesperson for the hunt, saying saboteurs were carrying out an “‘ongoing campaign’ of harassment and abuse”. And talkRADIO repeated these claims, adding that there was an “abusive and violent tirade”. But Paul Allman of Stockport Monitors told The Canary that media coverage was at odds with what happened.

Allman said that a “heavy-duty bike chain” with a padlock was inside the Land Rover, along with a dog leash, but denied anyone used them threateningly. He said the group uses chains to secure closed gates, preventing hunt trespass. Allman summed up the incident and ensuing media coverage:

They absolutely blew it right out of proportion. To be honest with you, I’m quite shocked as to the level they’ve gone to with it. … When all the footage actually comes out you’ll be like, “What? Is that it?”

Cheshire Police bailed Allman and seven other men on condition they don’t attend hunts in England and Wales. However, the police haven’t yet charged anyone.

The group previously made the news in October 2019 after the Daily Mail published a video showing the group arguing with a woman on her property.

Polly Portwin, hunting spokesperson for lobby group Countryside Alliance, said the Cheshire Hunt “operate entirely legally” and that “the consistently abusive and anti-social behaviour of these activists is disgraceful”. But during late 2018 and early 2019, anti-hunting activists claimed the Cheshire Hunt illegally killed five foxes. Meanwhile, Cheshire Against Blood Sports also revealed on 8 January that huntsman Oppenheim admitted to aggressive behaviour towards a hunt monitor after he threatened “to ram a bottle down her throat”.